Yves here. A few days ago, we ran a post on how different the Covid-19 infection rates were in two neighboring Queens communities, Flushing, which has a large Chinese population, and Corona, which is strongly Hispanic. One reader pointed out that the Latin culture likely played a role, with hugging, backslapping, and physical closeness in social interactions common. Looks like he was on to something….

One puzzle that arises in connection with the spread of Covid-19 is why there is such large variation in infection and death rates both across as well as within countries. This column argues that differences in the way people, and in particular different age groups, interact can explain part of this variation. Simulations show that the measures Belgium would need to take when re-opening its economy would be more moderate if it had the same interaction patterns as Germany, and more strict if it had Italy’s interaction patterns. A key lesson is that there is no one-size-fits-all solution that could be applied to all countries, or even to all regions within a country.

One puzzling question that arises in connection with the spread of the SARS-CoV-2 virus is why there are such large variations in its incidence (the infection rate) and its lethal consequences (the death toll) across countries as well as across regions within countries (Economist 2020: 16-17). In Europe, there is a striking contrast between the relatively low rates of infections, hospitalisations, and/or mortality in countries like Germany, Austria, Scandinavia (with the exception of Sweden) and in Eastern Europe and the relatively high rates observed in countries like Italy, Spain, France, the UK, Belgium and the Netherlands. Equally striking are the intra-country variations found within some countries, such as Italy, France and Switzerland. In the latter, the French-speaking part, Romandy, has epidemiological statistics close to those of France, the German-speaking, Alemanic part shows a strong similarity with Germany and Austria, while the Italian-speaking part, the Tessin, shows a strong similarity with northern Italy.

Many confounding forces are obviously at play, including geographical factors (population density, the role of super-drivers, etc.), genetic determinants, public health policies, and social or cultural characteristics. In current debates, attention has been mostly focused on explanations that privilege public health facilities and policies, including the capacity of the government to plan and anticipate and its ability to act decisively early enough in the propagation of the virus.

Recently, however, awareness of the role of genetics has been raised by a team of researchers from Ghent University in Belgium. According to this team, part of the intra-European differences in the intensity of the epidemic are attributable to genetic variations: some population groups carry a gene (ACE1) that facilitates the fixation of the SARS-CoV-2, while other groups exhibit a higher frequency of the polymorphism D of the same gene, which makes them more resistant to this virus (Delanghe et al. 2020). Interestingly, the more one moves toward the eastern parts of Europe, the higher the incidence of this favourable variant of the ACE1 gene. It is not only Eastern European countries but also Austria-Germany, Scandinavia, and southern Italy (where the Norman conquest left its biological imprint) that are within the zone where the polymorphism is found. Spain, Northern Italy, France, Belgium, the Netherlands, and the United Kingdom are not.

The Role of Culture

In our current research, we aim to bring to light the possible influence of local cultures. So far, cultural variations have been mostly conceived as differences in the attitudes and gestures displayed by people when they meet. The Japanese habit of keeping a reasonable distance, for example, is in stark contrast to the Western European habit, especially in southern Europe, of kissing and hugging friends, relatives, and acquaintances. Moreover, in some countries like South Korea, China, and Japan again, people are accustomed to wearing face masks as a way of protecting themselves against air pollution – an attitude which is something of an oddity in Europe. It is clear that these East Asian cultural habits are a big advantage under an attack from a virus when it is precisely these attitudes that are conducive to effective protection from contamination.

Here, we look at another component of culture, namely, the frequency of contact between people. For example, the Italian society is strongly centred on the family, and relatives pay frequent visits to each other. In Scandinavia and in German-speaking areas, by contrast, interpersonal contacts are less frequent. Fortunately for our purposes, ‘contact matrices’ have been estimated for a large number of countries, which display such contact frequencies, assumed to be pre-determined, both within and between different age groups. A simple glance at these matrices shows, for instance, that the density of contacts is comparatively high for Italy and much lower for Germany; Belgium occupies an intermediate position (see Figure 1).

To use this information in the most persuasive manner, we have carried out a thought exercise in two steps.

The SEIR model is widely used by epidemiologists to simulate the evolution of a pandemic (Adam 2020). Its underlying structure is described in Figure 2 (for one reference age group) where we see that the population is divided into four groups (compartments) of individuals. Group S are susceptible individuals, that is, those at risk of being contaminated;1 group E are individuals who have been exposed to the virus; group I consists of  individuals who were in group E but for whom the latency period is over so that they have become infectious; finally, R is the group of individuals who were contaminated but had an outcome (either a recovery or death) and are no longer infectious.

Economists are increasingly trying to improve our understanding of several aspects of the Covid-19 crisis (Baldwin and di Mauro 2020a, 2020b), and they have characteristically chosen the same model as their basic scaffolding, onto which some behavioural function is possibly grafted (e.g. Alfaro et al. 2020, Brotherhood et al. 2020, Forslid and Herzing 2020, Ichino et al. 2020, Jarosch et al. 2020).  Our own efforts consist of making the SEIR model ‘speak’ in terms of exit strategies aimed at (gradually) re-opening the economy, with the aim of then examining the specific influence of particular contact habits.

The results are striking. If Belgians had the contact habits of Germans, they would be able to (gradually) re-open their economy by resorting to milder measures than they actually need. And, conversely, if they had the contact habits of the Italians, they would need to use much harsher measures. More concretely, with their own culture Belgians must implement rather ambitious testing (and contact-tracing) schemes and enforce rather strict social-distancing measures if they want to avoid a significant rebound of the epidemic while re-opening their economy. If they had German interaction habits, they could avoid a rebound by implementing more moderate measures of testing and social distancing. But if they had Italian interaction habits, they would have no choice other than to implement more severe public health policies and proceed much more slowly in re-opening the economy. In particular, testing would have to be more established before starting to re-open and social distancing would have to be more stringently enforced in the course of the re-opening. This is essentially what Figure 3 is telling us with a stereotyped exit strategy. 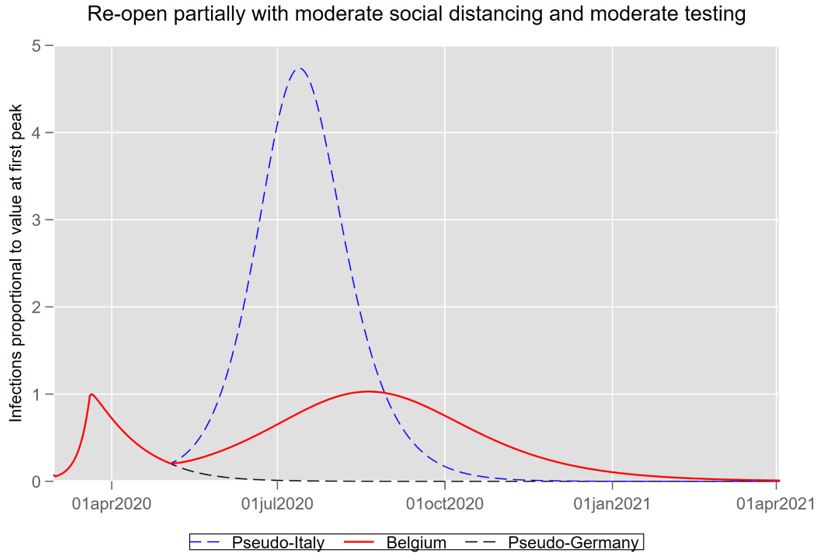 An important lesson is that a country like Germany is probably benefitting from all the advantages that work towards a comparatively smooth lockdown exit: (1) it possesses a strong public health infrastructure and has chosen sound public health policies that prepared the ground for an effective battle against Covid-19; (2) its social norms that guide individual behaviour, including habits regarding meetings and visits, help slow down an epidemic; and (3) its people might possess genetic characteristics that make them less vulnerable to the virus.

Contact frequencies may also provide a (partial) explanation for the aforementioned variations within Switzerland, where, in terms of rates of infection and deaths, the French-speaking part is close to France, the German-speaking part is close to Germany and Austria, and the Italian-speaking part is close to northern Italy. It is true, on the other hand, that important variations, such as those observed between northern and southern France, are not accounted for, confirming that there is no one explanation for all the geographical differences observed.  However, there is a key lesson to draw from our work and from the foregoing discussion: there is no one-size-fits-all solution that could be uniformly applied to all countries, or even to all regions within a given country. It is perhaps no coincidence that the EU has been unable or unwilling to suggest, let alone prescribe, a common lockdown exit strategy for all its member states, leaving them free to make their own decisions on the matter. The diversity of peoples and cultures within Europe is too large to allow for a general solution to the complex problems raised by the present pandemic. The same conclusion also applies to large federal political entities such as India, Russia, and the US.