Snakes have friends too National Geographic

‘Our Food System Is Very Much Modeled on Plantation Economics’ FAIR

The airborne lifetime of small speech droplets and their potential importance in SARS-CoV-2 transmission PNAS (nvl). The abstract:

Speech droplets generated by asymptomatic carriers of severe acute respiratory syndrome coronavirus 2 (SARS-CoV-2) are increasingly considered to be a likely mode of disease transmission. Highly sensitive laser light scattering observations have revealed that loud speech can emit thousands of oral fluid droplets per second. In a closed, stagnant air environment, they disappear from the window of view with time constants in the range of 8 to 14 min, which corresponds to droplet nuclei of ca. 4 μm diameter, or 12- to 21-μm droplets prior to dehydration. These observations confirm that there is a substantial probability that normal speaking causes airborne virus transmission in confined environments.

Making a mask’s ability to protect others all the more salient.

Estimating the burden of SARS-CoV-2 in France Science. From the abstract: “France has been heavily affected by the SARS-CoV-2 epidemic and went into lockdown on the 17 March 2020…. The lockdown reduced the reproductive number from 2.90 to 0.67 (77% reduction). By 11 May 2020, when interventions are scheduled to be eased, we project 2.8 million (range: 1.8–4.7) people, or 4.4% (range: 2.8–7.2) of the population, will have been infected. Population immunity appears insufficient to avoid a second wave if all control measures are released at the end of the lockdown.”

Without A Vaccine, Herd Immunity Won’t Save Us FiveThirtyEight

Where U.S. coronavirus cases are on the rise Reuters. Handy map: 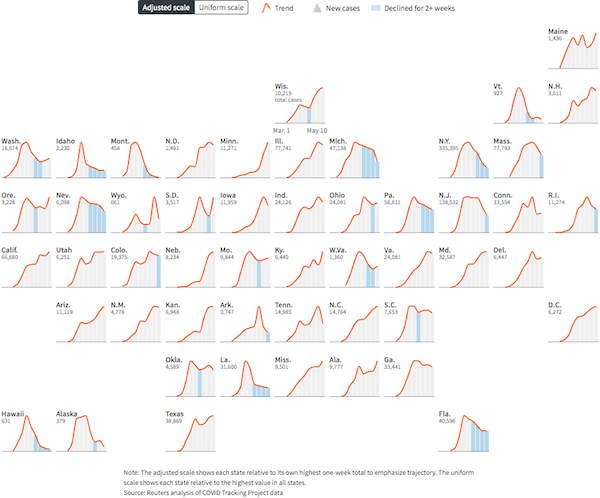 The two big reasons why California is struggling to control coronavirus Los Angeles Times. About those beaches:

There has been a steep rise in coronavirus cases reported in Orange County following the large crowds on the beaches on April 25-26.

In the week of April 20-26, there were 438 cases in Orange County. The week after that, 669 cases were reported, and the week after that, 759 cases. Further investigation is needed to determine whether the beaches were a source of spread for an outbreak or if the increase could be explained simply by other factors, such as increased testing.

“But you know, just us looking at it, there was a big jump in Orange County that was temporally consistent with possible transmission from that crowd event,” [Dr. George Rutherford, a former epidemic intelligence service officer with the U.S. Centers for Disease Control and Prevention] said.

Doubtful that there’s transmission splashing along the waterline or in the water. But there are gatherings around beach blankets where items like drinks and towels are shared, as well as lines at food carts, lines at parking lots, tailgating, afterparties, and, of course, demonstrators. No doubt much depends on the actual physical configuration of the beach. But doesn’t the precautionary principle apply here?

Coronavirus Ravaged a Choir. But Isolation Helped Contain It. NYT

‘People’s vaccine’ for coronavirus must be free, leaders urge and Why vaccine ‘nationalism’ could slow coronavirus fight FT

Despite Early Warnings, U.S. Took Months To Expand Swab Production For COVID-19 Test NPR. “Turns out a ‘test’ is not a single device. COVID-19 testing involves several steps, each one requiring different supplies, and there are shortages of different supplies at different times in different places.” Assume a test…

Exclusive: U.S. airlines tell crews not to force passengers to wear masks Reuters. Anyone who boards who boards must weat a mask. Inside the plane, the rules are more lenient. Madness. You thought seatback wars and crying babies were bad?

How the COVID-19 Bailout Gave Wall Street a No-Lose Casino Matt Taibbi, Rolling Stone. “To save people, we had to save the economy in which they operate, which meant saving the high-risk investments of Wall Streeters, as much as they might suck.” It also means, at all costs, preserving the wage relation completely unaltered (except for the worse, of course).

HEROES Act Delivers a Win to Health Insurance Industry The Intercept. I’m uncertain which is more cynical: HEROES or CARES.

Coronavirus May Never Go Away: WHO Barron’s. “‘This virus may become just another endemic virus in our communities and this virus may never go away,’ [Michael Ryan, the WHO’s emergencies director] told a virtual press conference in Geneva. ‘HIV has not gone away — but we have come to terms with the virus.'”

‘Zoom fatigue’ is taxing the brain. Here’s why that happens. National Geographic

How to Manage a Chinese Factory China Law Blog. “A bad economy directly translates to factory problems. Conversely, it also translates to buying opportunities as Chinese factories all of a sudden become willing to negotiate a lot more on prices and payment terms.”

How Hong Kong Did It The Atlantic

The Simple, and Simplistic, Messaging of Modi’s Lectures Is a Big Hit With His Audience The Wire

Hidden Over 2 Years: Dem Cyber-Firm’s Sworn Testimony It Had No Proof of Russian Hack of DNC Aaron Maté, RealClearInvestigations

Memo Names Obama Officials Who May Have Seen Flynn Reports Bloomberg. Taibbi comments: “I’ve always thought that lurking under Russiagate was a broader, scarier story about the systematic overuse of surveillance practices. We’re getting closer to that.”

These Young Socialists Think They Have Courage. They Don’t. Mitchell Abidor, NYT. “Taking a principled stand is courageous only when those taking it put themselves at risk. Placing others at risk requires no courage at all.” How true, and how true it is that liberal Democrats are moral exemplars, fully entitled to shame others.

Argument analysis: In a close case, concerns about chaos from “faithless electors” SCOTUSblog

Here’s Who Just Voted to Let the FBI Seize Your Online Search History Without a Warrant Gizmoda. Goddammit, Bernie.

Coronavirus will win. America needs to make a plan for failure. The Week. We bought time with the lockdowns, and squandered it. My personal view: Not to over-react, but in my view everybody who’s considering emigrating — internally or internationally — should accelerate preparations, in case the quarantine walls within and around the United States get too high too fast.

Businesses Chafing Under Covid-19 Lockdowns Turn to Armed Defiance New York Times (Re Silc). “In at least a half dozen cases around the state in recent days, frustrated small-business owners have turned to heavily armed, militia-style protesters like Mr. Archibald’s group to serve as reopening security squads.”

Thunderbirds to fly over Los Angeles Friday as part of U.S. tour saluting frontline workers ABC. Maybe they could airdrop some PPE while they’re at it?

New Information: Guaido Was the ‘Commander in Chief’ of the Failed Mercenary Operation Against Venezuela Venezuelanalysis

Springtime for Empire The Baffler. “[I]nsight into the peculiar world of the American foreign policy establishment.”

Tesla HR to employees: ‘Choose not to work, it may impact your unemployment benefits’ CNBC

A Pa. company switched from sewing football jerseys to face masks. Workers walked off, saying the plan was unsafe Patriot-News

They’re Working In Healthcare During A Pandemic. They Don’t Get Health Insurance. Buzzfeed

Don’t Blame Econ 101 for the Plight of Essential Workers Annie Lowry, The Atlantic. Opinion-haver and sentence-maker concludes: “We made these essential jobs bad jobs. The burden is on us to make them good ones.” No, it isn’t, Lady Bountiful.

Coping with ‘Death Awareness’ in the COVID-19 Era Scientific American. “Terror management theory.” Ashes in my garden or scattered over the ocean… 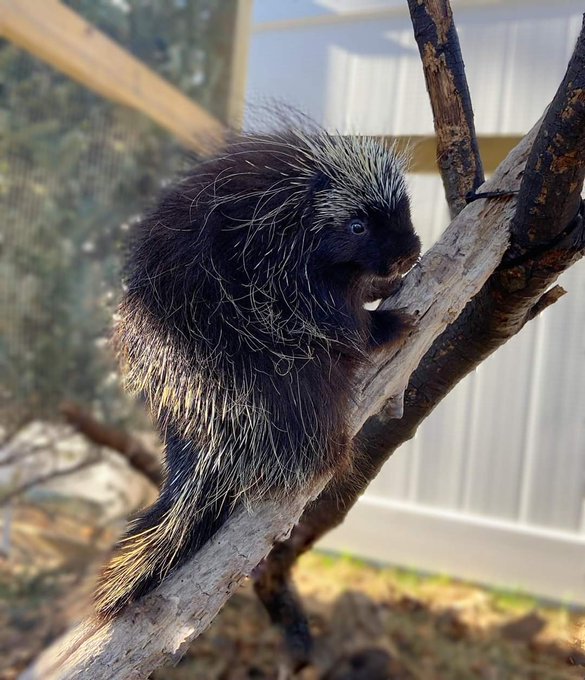