How was America able to send a man to the moon, yet now only able to dork around in the face of a disease that most other developed economies and even quite a few emerging ones have done reasonable jobs of containing? While its bungled Covid-19 response confirms the thesis that the US is a failed state, the cause isn’t simply enfeebled government bureaucracies and MBA-style magical thinking by too many people in charge. It’s the way citizens are setting out to propagate infection via refusing to change their habits. It’s as if the American religion has become “Don’t tell me what to do.” And that’s even more peculiar given how conformist Americans are.

In case you managed to miss the lead story in network news yesterday, US Covid-19 cases continue to rise, and at alarming rates in Texas, Florida, and California.

Dr. Anthony Fauci, the top U.S. infectious disease official, said the next two weeks would be critical to controlling the spread of the coronavirus in the U.S. https://t.co/XwB7ydD46z pic.twitter.com/kvLT27BAPb

And yes, sports fans, these increases are taking place in areas with some economic heft. A chart from Deutsche Bank via Econobrowser: 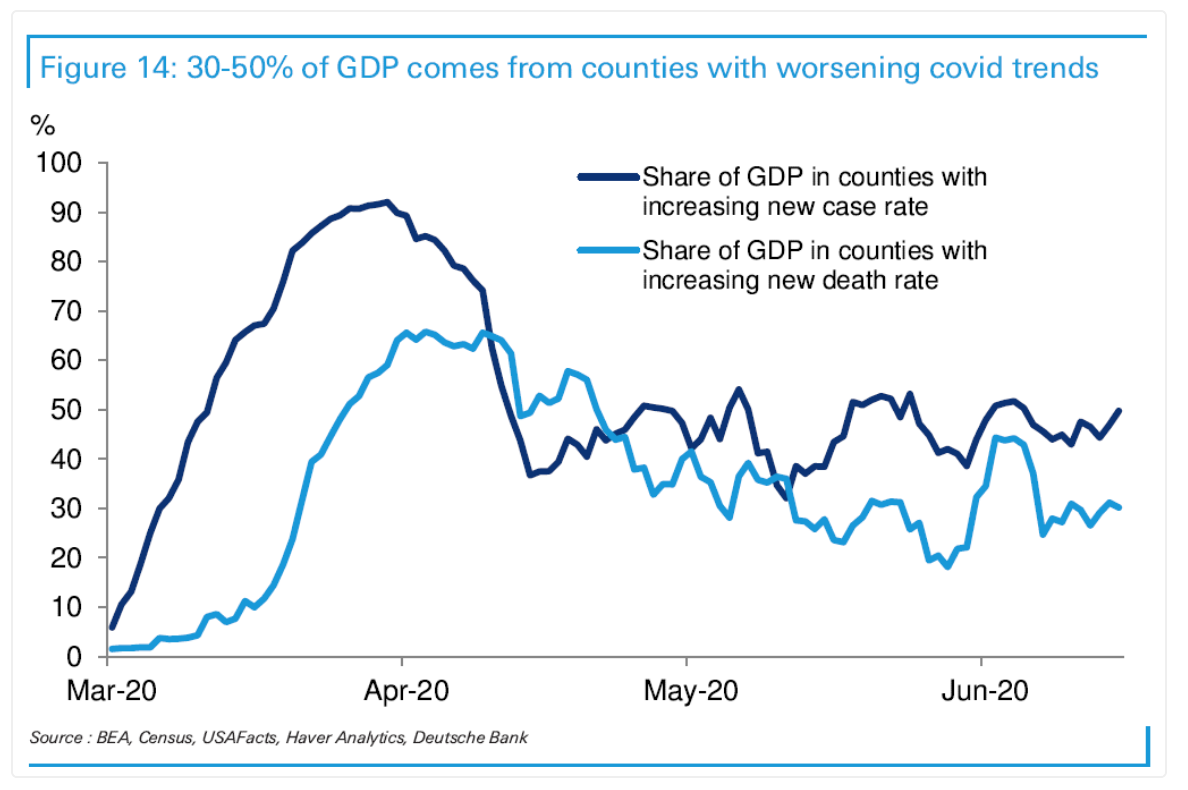 And let us not forget that plenty of people aren’t being tested, so Lord only know what is really going on. Lambert yesterday featured a Kafkaesque tweetstorm from an Arizona resident who went to extreme lengths to find someplace, anyplace that would test him, no avail.

The anti-mask types are getting reinforcement when even the Sainted Fauci himself wears no face covering during testimony, as if it’s fine to be maskless when speaking, when much of the general public knows speaking is droplet-generating activity. Can’t he at least put on a plastic shield for public performances? And what about newscasters?

Oh but please, continue saying shit like this: “When are you opening for dine in?” “Do you have a bathroom?” “Oh, I forgot my mask. Can’t I come in anyway?” “I can’t talk with the mask on.” “Wow, you guys are really going all out aren’t you.” “I’m glad this Covid thing is done.” pic.twitter.com/EXktJsgkFY

17 test positive for COVID-19 after Santa Anita’s recent meet, and another 16 were infected at SoFi Stadium, which is set to open Aug. 14 https://t.co/fVCAFNV9Ou

Having said that, the spikes are focusing some minds:

U.S. coronavirus cases are surging sharply again, thanks to outbreaks spreading across the country's South and West.

Now even some of Trump’s key allies in affected states are breaking with the WH on the state of the pandemic and how best to respond https://t.co/CZhJNQER1y

And to remind you of the obvious, Bangkok was the most visited city in the world, and the Thai economy is heavily dependent on tourists. Thailand shut down tourism, including still its largest source, China, and imposed a curfew that shut down its night-life, and even its malls. Only now is Thailand beginning to re-open. The country is not wealthy not does it have a surveillance state tech apparatus. Oh, and everyone from the prime minister to TV presenters wears masks in public.

Now so far, this is all pretty familiar stuff. Covid-19 nfections were rising in the South and California, so it wasn’t much of a stretch to think the growth rate would accelerate as the “reopenings” progressed.

An important element, which hasn’t gotten the attention it warrants, is confirmation of our thesis that the collapse in economic activity was due primarily to disease avoidance measures, as opposed to the lockdowns per se. We’ve pointed out that office workers in Manhattan are not coming back in anywhere close to the level allowed. An important study last week lead authored by Harvard’s Raj Chetty concluded the big spending drop came from the well off, because they could. From a write-up at NPR:

First up, consumer spending. Typically, Chetty said, recessions are driven by a drop in spending on durable goods, like refrigerators, automobiles and computers. This recession is different. It’s driven primarily by a decline in spending at restaurants, hotels, bars and other service establishments that require in-person contact. We kinda already knew that. But what the team’s data show is that this decline in spending is mostly in rich ZIP codes, whose businesses saw a 70% drop-off in their revenue. That compares with a 30% drop in revenue for businesses in poorer ZIP codes.

Second, jobs. This 70% fall in revenue at businesses in rich ZIP codes led those businesses to lay off nearly 70% of their employees. These employees are mostly low-wage workers. Businesses in poorer ZIP codes laid off about 30% of their employees. The bottom line, Chetty said in his presentation, is that “reductions in spending by the rich have led to loss in jobs mostly for low-income individuals working in affluent areas.”

So the affluent won’t go back to their personal old normal until they feel safer. They might loosen up a bit as restrictions ease, but they have and will continue to engage in adaptations, like having their hair coiffed at home rather than in a salon.

Yet we’re seeing bizarre responses. The usual reason for seemingly bad official decisions in America, like breaking nations in the Middle East or having Biden as the Democratic Party nominee, is that it serves certain interest groups (arms makers, corporate donors) even if it damages much bigger and broader elements.

Instead, we now see the disturbing spectacle of state and local public health officials coming under threat. From the Wall Street Journal:

Opponents of social-distancing rules are using Facebook Inc. FB 1.26% to organize and broadcast protests at the homes of health officials, sometimes using violent rhetoric, in campaigns that health authorities say amount to harassment…..

“An increasing number of public-health officials, across the country—myself included—are threatened with violence on a regular basis,” said Barbara Ferrer, director of Los Angeles County’s public-health department. “In my case, the death threats started last month, during a Covid-19 Facebook Live public briefing when someone very casually suggested that I should be shot.”….

Seven of California’s 61 public-health officers have stepped down since the beginning of the crisis, she said, one directly because of protests targeting her personally. Another is now under around-the-clock protection from the county sheriff due to credible threats.

“There’s definitely a place for public comment, but this has crossed into intimidation,” Ms.[Kat] DeBurgh [head of the California Public Health Officers Association] said about the protests at her members’ family residences.

Needless to say, the groups that are hate-mongering against public health officials are spreading false information about Covid-19 measures, like saying social distancing does not work and masks are dangerous.

But my issue is not how to stop or counter this disinformation (the worst is it would not be hard if the officialdom had its Mighty Wurlitzer playing the same tune loudly all the time). The big cause for concern is what has happened to the US that we can’t protect public officials from threats at their homes? Officials should be thick-skinned enough to take harsh words at work and in public forums; that’s part of what they signed up for. However, the police should come down like a ton of bricks on those who threaten them at home (or threaten family members at home or at school). This failure (particularly in a state like California) comes off as a sign of much more serious societal breakdown. Or as Lambert put it, a breakdown in power relations.

It may be that members of the business community, particularly “local notables” whose stature has fallen over time as private equity and tech barons achieve egregious levels of wealth, see an effective Covid-19 response as encroaching unduly on their authority, and their social capital matters to them more than their profits. Michal Kalecki made a similar argument in his classic essay on the obstacles to achieving full employment. He noted that executives opposed full employment policies even though their businesses would earn higher profits with them:

We have considered the political reasons for the opposition to the policy of creating employment by government spending. But even if this opposition were overcome — as it may well be under the pressure of the masses — the maintenance of full employment would cause social and political changes which would give a new impetus to the opposition of the business leaders. Indeed, under a regime of permanent full employment, the ‘sack’ would cease to play its role as a ‘disciplinary measure. The social position of the boss would be undermined, and the self-assurance and class-consciousness of the working class would grow. Strikes for wage increases and improvements in conditions of work would create political tension. It is true that profits would be higher under a regime of full employment than they are on the average under laissez-faire, and even the rise in wage rates resulting from the stronger bargaining power of the workers is less likely to reduce profits than to increase prices, and thus adversely affects only the rentier interests. But ‘discipline in the factories’ and ‘political stability’ are more appreciated than profits by business leaders. Their class instinct tells them that lasting full employment is unsound from their point of view, and that unemployment is an integral part of the ‘normal’ capitalist system.

The contemporary version is that effective Covid-19 policies are too dirigiste for free market ideologues. But even that reaction is rational compared to those who object to being required to wear a face covering in public. No doubt some, perhaps many, of the individuals targeting public health officials come out of the anti-vax movement and thus have plenty of misguided pre-existing animosity. But again, I’m at a loss to explain what the Journal depicts as frequent failures to protect their safety.