Yves here. This article is a bit of a public service announcement, but the detail on the dust storm’s impact is also technically intriguing. Plus some of you may be suffering from Wunderground withdrawal. 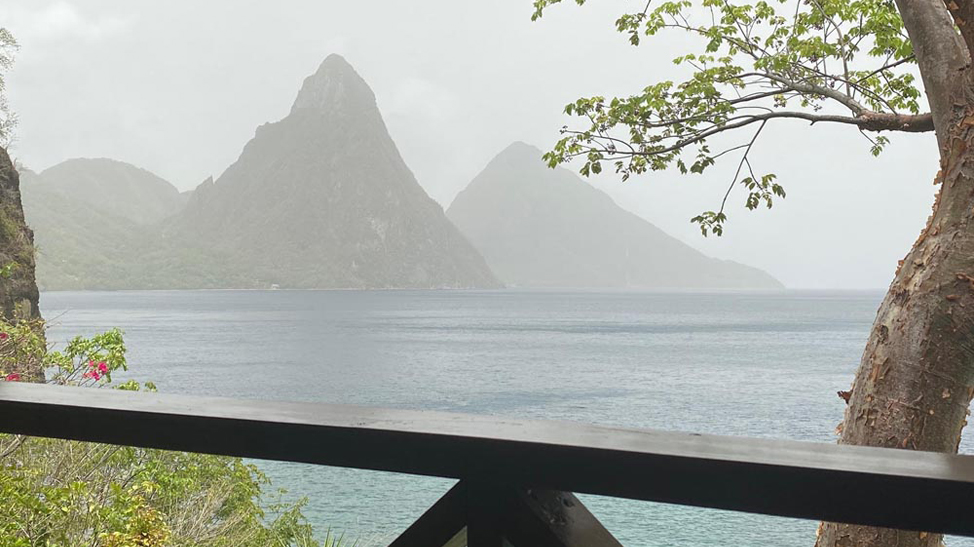 A massive dust storm formed over the Sahara Desert last week and invaded the Caribbean over the June 20-21 weekend, bringing dangerous levels of air pollution and low visibility to the islands.

The dust is accompanied by a large amount of dry air from the Saharan Air Layer, putting a damper on any hurricanes that attempt to form. None of the reliable computer models are predicting Atlantic tropical cyclone formation for the remainder of June, largely because of the dry air that is accompanying the dust. The dust is also acting to decrease the amount of sunlight hitting the surface, cooling the ocean and further discouraging hurricane activity.

As detailed by IBM meteorologist Michael Ventrice, the impressive Saharan Air Layer surge is being driven by passage over western Africa of an atmospheric disturbance called a suppressed Kelvin wave. This disturbance generated strong east-to-west surface trade winds which blew the dust from the Sahara out over the Atlantic Ocean. June and July are the peak months for Saharan dust storms that affect the tropical Atlantic. That said, this week’s dust storm is an impressive one, with a much larger areal extent than average.

The dust cloud is bringing dangerously high levels of fine particulate pollution (PM2.5, particles less than 2.5 microns or 0.0001 inch in diameter) and PM10 (particles less than 10 microns in diameter). Air pollution aggravates COVID-19 symptoms, leading to expected increases in hospital admissions from the disease in regions where dust concentrations spike.

The African dust gave most of the air pollution monitors in the Lesser Antilles Islands in the Caribbean an air quality index (AQI) in the red (unhealthy) range for much of the weekend. The worst air quality was observed on the island of Tobago, just off the northeast coast of South America, where PM10 levels topped out for four hours on June 21 at the upper end of the scale: the brown “Hazardous” category.

The dust cloud is forecast to push west and northwest this week, invading much of the southeast U.S. from June 25 through June 27. Air pollution transport models are indicating that the dust will still be very concentrated when it reaches the U.S., and many locations in Texas, Arkansas, and Louisiana likely will experience an AQI in the orange “Unhealthy for Sensitive Groups” or red “Unhealthy” range. A similar air pollution event resulting from African dust occurred during the first week of July 2018, bringing to Texas and Arkansas the worst air pollution of the year.

A PM2.5 episode as widespread and severe as this – even without the COVID-19 pandemic raging – could cause hundreds of premature deaths. A 2019 study, Effects of fossil fuel and total anthropogenic emission removal on public health and climate, found that the health burden of fine particulate matter (PM2.5) air pollution is much higher than had been previously assumed.

According to a 2018 study done by the Health Effects Institute (a U.S. nonprofit corporation funded by EPA and the auto industry), PM2.5 pollution in the U.S. caused approximately 87,000 premature deaths per year between 2010 and 2016. Air pollution deaths are calculated using epidemiological studies, which correlate death rates with air pollution levels. Air pollution has been proven to increase the incidence of deaths caused by strokes, heart attacks, and lung disease. As these causes of death result also from other factors – such as lifestyle and family history – they are usually referred to as premature deaths.

1. Dust acts as a shield, which keeps sunlight from reaching the surface. So large amounts of dust can keep the sea surface temperatures up to 1 degree Celsius cooler than average in the hurricane Main Development Region from the coast of Africa to the Caribbean, providing hurricanes with less energy to form and grow. Ocean temperatures in the MDR currently are 0.7 degree Fahrenheit above average, so that anomaly should ease this week as the dust blocks sunlight.

2. The Saharan Air Layer is a layer of dry, dusty Saharan air that rides up over the low-level moist air over the tropical Atlantic. At the boundary between the SAL and low-level moist air where the trade winds blow is the trade wind inversion – a region of the atmosphere where the temperature increases with height. Because atmospheric temperature normally decreases with height, this “inversion” acts to put the brakes on any thunderstorms that try to punch through it. This result happens because the air in a thunderstorm’s updraft suddenly encounters a region where the updraft air is cooler and less buoyant than the surrounding air and thus cannot keep moving upward. The dust in the SAL absorbs solar radiation, which heats the air in the trade wind inversion. The result? The inversion is stronger, which inhibits the thunderstorms that power a hurricane.

3. Dust may also act to produce more clouds, but this effect needs much more study. If the dust particles are of the right size to serve as “condensation nuclei” – centers around which raindrops can form and grow – the dust can lead to more clouds. In that case, dust could potentially aid in formation and intensification of hurricanes. However, if the dust acts to make more low-level clouds over the tropical Atlantic, the amount of sunlight reaching the ocean is reduced, cooling the sea surface temperatures and discouraging hurricane formation (Kaufman et al., 2005).

The amount of dust that gets transported over the Atlantic depends on a mix of three main factors: large-scale and local-scale weather patterns (windy weather transports more dust), how wet the current rainy season is (wet weather will wash out dust before it gets transported over the Atlantic), and how dry and drought-damaged the soil is. The level of drought experienced in the northwestern Sahel during the previous year is the key factor of the three in determining how much dust gets transported over the Atlantic during hurricane season, according to a January 2004 study in Geophysical Research Letters published by C. Moulin and I. Chiapello. In 2019 (see Figure 3), precipitation across the northwestern Sahel was near average, which should result in a near-average African dust season and no unusual influence on the 2020 Atlantic hurricane season.

The Future of African Dust Events: A Decrease?

In a 2016 paper, The past, present and future of African dust, Amato Evan and co-authors found that the surface wind field responsible for most of the variability in North African dust emission was the result of the topography of the Sahara affecting the surface wind patterns. Climate models for coming decades show this wind pattern altering to create a significant downward trend in African dust emission and transport as greenhouse gas concentrations increase. Such a shift might benefit West Africa via improved air quality and increased rainfall, but might also allow for more warming of the tropical Atlantic, making it better suited for hurricane formation and growth.

See this related tweet: It illustrates the El Yunque region of Northeast Puerto Rico before arrival of the African dust cloud (left) and after (right).