The Great American Housing Bubble Credit Slips. Adam Levitin’s new book, The Great American Housing Bubble: What Went Wrong and How We Can Protect Ourselves in the Future. Yves: “Levitin was Special Counsel to the Congressional Oversight Panel, so he had an insider vantage, and also worked a great deal behind the scenes with anti-foreclosure activists.”

Olfactory transmucosal SARS-CoV-2 invasion as port of Central Nervous System entry in COVID-19 patients (preprint) bioRxiv. From the abstract: “SARS-CoV-2 enters the nervous system via trespassing the neuro-mucosal interface in the olfactory mucosa by exploiting the close vicinity of olfactory mucosal and nervous tissue including delicate olfactory and sensitive nerve endings.”

Pulmonary Vascular Endothelialitis, Thrombosis, and Angiogenesis in Covid-19 NEJM. From Harvard’s press release, an English translation: “Newly published research detailing the post-mortem features of seven patients who died of COVID-19 provides critical insights, including evidence of extensive damage to the lining of the blood vessels, abnormal blood vessel growth in the lungs and widespread blood clotting.” Not “just flu,” in other words.

Development of an inactivated vaccine candidate, BBIBP-CorV, with potent protection against SARS-CoV-2 Cell. From the abstract: “Here, we report the pilot-scale production of an inactivated SARS-CoV-2 vaccine candidate (BBIBP-CorV) that induces high levels of neutralizing antibodies titers in mice, rats, guinea pigs, rabbits and nonhuman primates (cynomolgus monkeys and rhesus macaques) to provide protection against SARS-CoV-2…. These results support the further evaluation of BBIBP-CorV in a clinical trial.”

Why Do Some Recover From COVID-19 Quickly, While Others Seem Likely To Face Long-Term Disability? Health Affairs

Hydroxychloroquine is not dead yet NBC. A calm wrap-up, at long last.

A coronavirus mystery: How many people in L.A. actually have COVID-19? LA Times

False Negative Tests for SARS-CoV-2 Infection — Challenges and Implications NEJM. “Designing a reference standard for measuring the sensitivity of SARS-CoV-2 tests in asymptomatic people is an unsolved problem that needs urgent attention to increase confidence in test results for contact-tracing or screening purposes.” Yikes.

Prevalence of Asymptomatic SARS-CoV-2 Infection Annals of Internal Medicine. From the abstract: “Because of the high risk for silent spread by asymptomatic persons, it is imperative that testing programs include those without symptoms. To supplement conventional diagnostic testing, which is constrained by capacity, cost, and its one-off nature, innovative tactics for public health surveillance, such as crowdsourcing digital wearable data and monitoring sewage sludge, might be helpful.”

The Town That Tested Itself The New Yorker. Rather like Ceredigion in Wales, to which we linked yesterday.

COVID-19 and the Social Distancing Paradox: dangers and solutions (PDF) European Institute for Science, Media and Democracy. These researchers had masked people wear a “Social Distancing belt, a special belt augmented with hidden sensor boxes allowing to measure social distances” between the wearer and other pedestrians. From the body of the paper: “[A] visual stimulus signaling danger [like a mask] makes people more sensible to safety and increases social distancing protection.”

History Suggests the Handshake Will Survive the Pandemic Bloomberg

In pictures: looking back at one year of protest in Hong Kong Lausan

‘Police will come for my son’: Hong Kong parents seek a way out for their children Hong Kong Free Press. Hence:

a small cottage industry around HKers’ mad rush to apply for their BNO passports appears to have sprung up. this stationery store sign says it stocks envelopes used for mailing BNO documents pic.twitter.com/ohXLVe8LhL

The Political Economy of Lockdown in India Multiplier Effect

Home Secretary Priti Patel calls violence at UK Black Lives Matter protests ‘utterly disgraceful’ as clean up starts after a demonstrator tried to BURN Cenotaph’s Union flag, a crowd toppled a statue of slave trader Edward Colston and eight police are hurt Daily Mail. “Toppled”? Are we sure about that? Thread:

Who was Edward Colston and why was his Bristol statue toppled? Guardian

Toulouse’s troubles mirror those of France as a whole FT

Foster fears Brexit talks ‘not going particularly well’ RTE. I don’t know if the Irish do understatement like the Brits, but if so….

Like, don&#39;t kid yourself – the NFL is a HUGE part of Trump&#39;s constituency and they just told him &quot;look buddy, this is fucking up the plantation, we&#39;re out…&quot;

This matters a lot more than people are realizing and it&#39;s definitely driving Trump nuts.

This Treasury Official Is Running the Bailout. It’s Been Great for His Family. Pro Publica

Democrats seek to tap into fury over George Floyd The Hill. Looks like their response to Ferguson just kicked the can down the road. Unsurprisingly.

On the eve of George Floyd’s funeral, we join with millions of Americans who continue to mourn his murder. His death is a shattering reminder of the injustice &amp; inequities that Black Americans still endure in our society.

The scourge of racism, intolerance &amp; inequality must end. pic.twitter.com/m9YxLqZ1Lb

We have our MOMENT. The entire nation has been galvanized. The patriotic protesters have done well and will continue to do so. This is not enough. We need to construct a MOVEMENT that puts in place the structural reforms necessary for the sweeping changes that are badly needed.

Former Obama aide goes off on looters: ‘There are human beings that live in this goddamn neighborhood’ The Hill. Another West Wing rerun…

From guns to neck restraint: How police tactics differ around the world MSN (KW).

What Is Qualified Immunity, and What Does it Have to Do With Police Reform? Just Security

The Enormous Scale of This Movement The Atlantic

The U.S. Needs To Complete Its Reconstruction Efforts. Here’s How. Forbes

You gotta know the territory:

I hope people appreciate how difficult it is to get 10,000 Angelinos WALK rather than drive. https://t.co/yVJiyCQYnR

Protests in a pandemic present dilemma for scientists FT. American roulette once more? Framing this as the trolley problem, a thread:

1/OK, I didn&#39;t want to have to do this thread, because it&#39;s inevitably going to make a lot of people angry. But lots of people are asking, so I guess I have to:

Oh my God this is the United States of America. Protesters with colorful umbrelllas forcing riot cops to retreat in Seattle tonight.

These sign-shields from Columbus, Ohio are absolutely brilliant:
Painted as signs on one side and reflective on the other. Used to form a wooden shield wall against use of force, and the reflective side counters bright lights, and might also offer some protection against LRAD. ? pic.twitter.com/ZS3gaytPnu

NYT Opinion Editor Resigns After Furor Over Op-Ed, NYT Reports Bloomberg. The Times should clean house. There might be one or two worth keeping (Bruenig), but otherwise defenestrate Friedman, Brooks, Dowd, Krugman, etc. — in no particular order. They are all over-paid, shopworn, and bad. Put the money into the newsroom.

Lavish photos show what it’s like to go on a luxury safari that costs $125,000 per person and uses a private jet as its main mode of transportation Business Insider (KW).

Hannah Arendt and the Twentieth Century Literaturwissenschaft in Berlin (DJG). 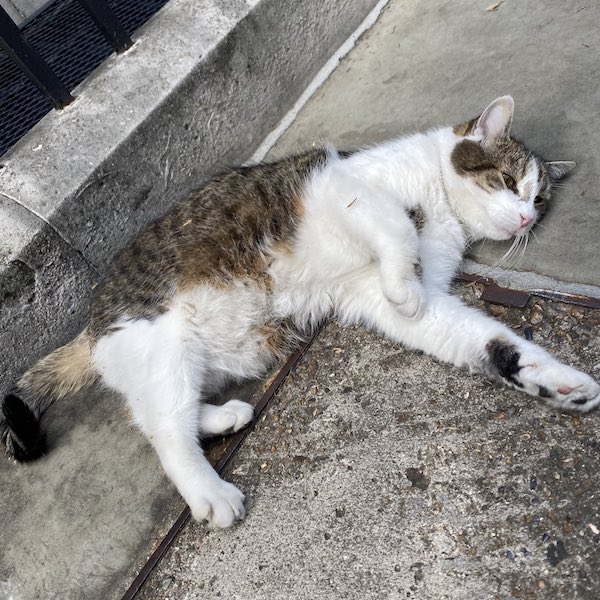 Larry the Cat: “I don’t lounge, I glide statically.”