I have a quarrel with the phrase “trust the science” (and in so quarreling, I don’t mean to reinforce culture war-ish talking points; I straight up disagree with the plain meaning of the words, for reasons I am about to explain). Here is a typical usage example, from the Tallahassee Democrat:

The kids join the drumbeat of public sentiment of frustration with leaders that continue to stall instead of addressing the climate crisis. After years of feeling like climate science and environmental warnings were falling on deaf ears, 2019 feels different. Perhaps 2018 served as a wake-up call and Americans are finally ready to connect the dots and trust the science.

(Because who but a yahoo wouldn’t “trust the science”? We’ll get to Thomas Frank below.) Here is an example of signage: 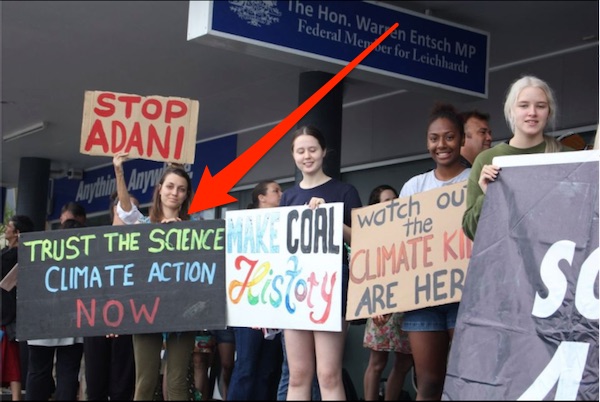 I would listen to the scientists.

When Greta Thunberg, the youthful climate activist, testified in Congress last month, submitting as her testimony the IPCC 1.5° report, she was asked by one member why should we trust the science. She replied, incredulously, “because it’s science!”

So many people vehemently disagreeing with each other, all the while trusting science; and so many people not trusting science at all. Perhaps “trust the science” is not all that meaningful? My concern, as I said, is with the plain meaning of the phrase: There is no “the science” (with definite article) because because progress in science is based on conflict, and you have to pick a side (and there may be more than two). Similarly with “the scientists,” as Biden would have it. Which ones?

So how is science done, and how is progress in science achieved? I may be showing my age here, but I believe that Thomas Kuhn, in the Structure of Scientific Revolutions, gave a very good account. Excerpting from Kuhn’s entry in The Stanford Encyclopedia of Philosophy:

In The Structure of Scientific Revolutions Kuhn paints a picture of the development of science quite unlike any that had gone before … [Kuhn] claims that normal science can succeed in making progress only if there is a strong commitment by the relevant scientific community to their shared theoretical beliefs, values, instruments and techniques, and even metaphysics. This constellation of shared commitments Kuhn at one point calls a ‘disciplinary matrix’ (1970a, 182) although elsewhere he often uses the term ‘paradigm’. Because commitment to the disciplinary matrix is a pre-requisite for successful normal science, an inculcation of that commitment is a key element in scientific training and in the formation of the mind-set of a successful scientist. … A mature science, according to Kuhn, experiences alternating phases of normal science and revolutions. In normal science the key theories, instruments, values and metaphysical assumptions that comprise the disciplinary matrix are kept fixed, permitting the cumulative generation of puzzle-solutions….

Here is an example of “normal science,” from Quebec’s The Suburban, “Trust the science on COVID-19, but much is still not known,” from chemist Dr. Joe Schwarcz, Director of the McGill Office for Science and Society:

In the long run, we have to trust the science, but unfortunately, science does not progress by giant leaps and bounds — only the quacks can do that. Science progresses by a series of small, careful steps, but eventually it will put us on the right track.

….whereas in a scientific revolution the disciplinary matrix undergoes revision, in order to permit the solution of the more serious anomalous puzzles that disturbed the preceding period of normal science. A particularly important part of Kuhn’s thesis in The Structure of Scientific Revolutions focuses upon one specific component of the disciplinary matrix. This is the consensus on exemplary instances of scientific research. These exemplars of good science are what Kuhn refers to when he uses the term ‘paradigm’in a narrower sense. He cites Aristotle’s analysis of motion, Ptolemy’s computations of plantery positions, Lavoisier’s application of the balance, and Maxwell’s mathematization of the electromagnetic field as paradigms (1962/1970a, 23). Exemplary instances of science are typically to be found in books and papers, and so Kuhn often also describes great texts as paradigms—Ptolemy’s Almagest, Lavoisier’s Traité élémentaire de chimie, and Newton’s Principia Mathematica and Opticks (1962/1970a, 12). Such texts contain not only the key theories and laws, but also—and this is what makes them paradigms—the applications of those theories in the solution of important problems

(For awhile, one was seeing “paradigm shift” in every book in every airport bookstore business section, when we were going to airports; what most of these books didn’t understand was that a paradigm applies across a discipline, and not simply within a firm. Nor is it possible to induce a paradigm shift simply by proclaiming it, sadly for motivational speakers.)

Interestingly, we’re seeing an example of such a paradigm shift, and the resistance to it, in the COVID-19 crisis, in the droplet vs. aerosol transmission controversy. Vox explains:

[In a 1932 paper, William Wells] outlined a clear distinction between droplets and aerosols according to their size. Big drops fall, and little aerosolized drops float.

It’s now appreciated that the actual picture is a lot more complicated.

“We’re always exhaling, in fact, a gas cloud that contains within it a continuum spectrum of droplet sizes,” says Lydia Bourouiba, an MIT researcher who studies the fluid dynamics of infections. And, as she explained in a March paper in JAMA, the conditions of the cloud itself can affect the range of some of the droplets. If propelled by a cough or sneeze, Bourouiba finds, droplets can travel upward of 20 feet. “The cloud mixture, not the drop sizes, determines the initial range of the drops and their fate in indoor environments.”….

There’s growing theoretical evidence for the airborne spread of the coronavirus. Lab studies, in idealized conditions, also show that the virus can live in an aerosolized form for up to 16 hours (the scientists in this case intentionally created aerosolized droplets with a machine).

“Imploring” because “the key theories, instruments, values and metaphysical assumptions that comprise the disciplinary matrix are kept fixed.”

… the WHO and others to address airborne transmission of Covid-19, says. “It is in the air,” she says, “and you inhale it. It’s coming from our nose from our mouths. It’s lingering in the air and others can inhale it.”

That the WHO updated its language is a sign that it’s starting to appreciate [“kept fixed”] this perspective. (That said: The WHO still defines [“kept fixed”] a droplet as a particle larger than than 5-to-10 microns, and an aerosol as something smaller, despite many scientists arguing the cutoff is meaningless.)

So, when we say “trust the science” in this context, what can we mean? Which paradigm — “a science” — do we select? (I exercised what I consider to be my critical thinking skills, and went with the aerosol transmission paradigm, and adjusted my personal practice accordingly.[1])

This last example, of “Fauci” screen-printed onto masks, is especially ironic. As I wrote back in June:

Lambert here: To my shame, I bought into — and worse, propagated, told readers and friends — the original LIE propagated by Fauci and WHO, that masks were not necessary. Fortunately, I continued to do my homework and watch the news flow, and changed my mind (and my practice). Fauci and WHO perpetrated what Plato called a “noble lie,” [UPDATE See also contemporary philosopher Leo Strauss] believing that the best way to make sure that medical personnel — and they, too, personally — had masks was to make sure the public they duped didn’t buy them up, and so they used their authority to lie about whether masks worked (they do). In an election season where the liberal Democrat pitch seems to be “Let The Professionals Take Charge Again”™, having top PMC and global agencies get caught out in a Noble Lie might not have been the greatest idea. And as we few, we happy few in the Blue States make fun of the fat stupid loud people in the Red States who don’t trust the experts that lied to them, we might consider whether our Noble Lies have unexpected effects, not merely politically, but in the destruction of the very concept of public health. Sorry about that.

Sometimes, critical thinking can be painful. But, sadly, there’s no particular reason to lend one’s trust to scientists while surrendering it. Thomas Frank writes:

These days, right-thinking Americans are tearfully declaring their eternal and unswerving faith in science. Democratic leaders are urging our disease-stricken country to heed the findings of medical experts as though they were the word of God….

Unfortunately, it’s all a mistake. Donald Trump’s prodigious stupidity is not the sole cause of our crushing national failure to beat the coronavirus. Plenty of blame must also go to our screwed-up healthcare system, which scorns the very idea of public health and treats access to medical care as a private luxury that is rightfully available only to some. It is the healthcare system, not Trump, that routinely denies people treatment if they lack insurance; that bankrupts people for ordinary therapies; that strips people of their coverage when they lose their jobs — and millions of people are losing their jobs in this pandemic. It is the healthcare system that, when a Covid treatment finally arrives, will almost certainly charge Americans a hefty price to receive it (3).

And that system is the way it is because organised medicine has for almost a century used the prestige of expertise to keep it that way.

Bowing down before expertise is precisely what has made public health an impossible dream.

Is there a way to respectfully leverage the expertise of scientists — some of whom are truly in it “for the love of the game,” let us not forget that — without bowing down? I would, again, urge that critical thinking skills are the anwer.

Sadly, we as a society and policy do not seem to inculcate critical thinking skills very well. How to do better? I would like to see, well, a paradigm shift from “Trust the science” to “Do the science,” because I think that is an operational capacity that an informed citizenry should have. (We see this all the time when ordinary working people become subject matter experts to fight pipelines or landfills, or save lakes, or become involved in long legal battles with corporations that have poisoned them and their environs). We should encourage this capacity. One easy way would be to remove all paywalls from scientific publications, and have the Federal Government pay the rapacious publishers a reasonable sum. Those same publishers should include, besides Abstracts, a “Plain Langauge Summary” in their editorial designs. We should also fund a great deal more citizen science, ideally under the aegis of a Jobs Guarantee. With climate change barreling down upon us, there are innumerable observational studies that should be performed.

[1] There is also a paper which I could not retrieve, which argues in summary that hospital personnel are triggered by the word “airborne,” because to them it means a germ that’s wildly contagious, like measles or worse (which COVID is not), and they have to take a lot of measures accordingly, like moon suits or whatever. This is another example of a disciplinary matrix or paradigm.