This is Naked Capitalism fundraising week. 1568 donors have already invested in our efforts to combat corruption and predatory conduct, particularly in the financial realm. Please join us and participate via our donation page, which shows how to give via check, credit card, debit card, or PayPal. Read about why we’re doing this fundraiser, what we’ve accomplished in the last year, and our current goal, more original reporting.

Yves here. VoxEU periodically publishes write-ups of granular geographic studies which show lasting impact, sometimes over hundreds of years, of the economic or political effects of famine, war, or religious schism. Nevertheless, this finding on the effect on inequality of the 1918 flu pandemic may seem surprising, given that it’s generally depicted as not having done much economic damage.

The COVID-19 outbreak is expected to increase income inequality around the world as the poorer are likely to be hit harder by the pandemic’s negative economic impact. Focusing on Italy, this column argues that such distributional consequences also appeared during the 1918 influenza pandemic. Income inequality became higher in areas more afflicted by the flu pandemic, and this is mostly explained by a reduction in the share of income held by poorer people. This effect seems to persist even a century after the pandemic.

The COVID-19 pandemic is having an unprecedented negative impact on the economy. The most recent estimates of GDP growth during the second quarter of 2020 report an average 12% decrease in GDP among European countries and a 32% reduction in GDP for the US. As expected, many jobs have been lost either as a direct effect of the pandemic or as a consequence of the lockdown measures introduced in most countries (Baldwin and Weder di Mauro 2020). Early evidence suggests that these economic costs are spread unequally across the population and that low-paying occupations are the ones hit harder (Galasso 2020, Boeri et al. 2020, Stabile et al. 2020). These results are also in line with studies about the distributional effects of the most recent epidemics (Furceri et al. 2020).1 However, evidence from the fourteenth-century Black Death suggests that pandemics seem to reduce inequality in the long run (Alfani and Ammannati, 2017).

In a recent paper, we contribute to the discussion about the link between pandemics and inequality with a focus on the 1918 Great Influenza pandemic (Galletta and Giommoni 2020). We use unique data to exploit the heterogeneous geographical diffusion of the Spanish influenza to study how it relates to the level of inequality in Italian municipalities. This analysis comes at a time of growing interest among economists in the 1918 pandemic as a case with potential lessons for the present pandemic (Karlsson et al. 2014, Barro et al. 2020, Correia et al. 2020, Dahl et al. 2020, Carillo and Jappelli 2020, Guimbeau et al. 2020, Aassve et al. 2020).

The 1918 Influenza Pandemic and WWI in Italy

The 1918 influenza pandemic was the severest in modern history. Estimates suggest that 500 million people were infected worldwide and that between 20 million and 50 million died as a consequence of the disease (Johnson et al. 2002).

Italy reported one of the highest mortality rates in Europe, with 600,000 people falling victim to the flu. The severity of the Italian epidemic was a result of several factors, such as the low standard of living for most of the population and ineffective non-pharmaceutical interventions, as well as the existence of an active WWI front on Italian territory. Importantly, several historical sources report the presence of the disease among Italian soldiers in military camps and trenches and suggest that the relocation of contagious soldiers played a decisive role in the diffusion of the flu from the war front to Italian communities (Tognotti 2015).

Because data on deaths related to the influenza pandemic are not available at the local level, we rely on information of troop movement in Italian territory as a proxy for the diffusion of the influenza across localities. In particular, we use the variation in the number of WWI soldiers who returned in their hometown, on leaves of absence, during the epidemic’s peak and died of illness.

To construct such a proxy for soldier-related flu exposure, we use digitised information from the Italian ‘Honour Roll of WWI Dead’ (‘Albo dei Caduti Italiani della Grande Guerra’). This comprehensive publication reports information on place of birth, place of death, day of death, and reason of death for the 540,401 Italian soldiers who died from 1915 to 1920.

The proxy captures both geographic and time variation in the severity of the disease. We find that at the regional level, the most disaggregated data on numbers of influenza casualties, the per capita number of soldiers who died of illness in their hometown during the worst year of the epidemic – 1918 – is highly correlated with the number of influenza victims (Figure 1).

Figure 1 WWI casualties and victims of influenza, by town and region 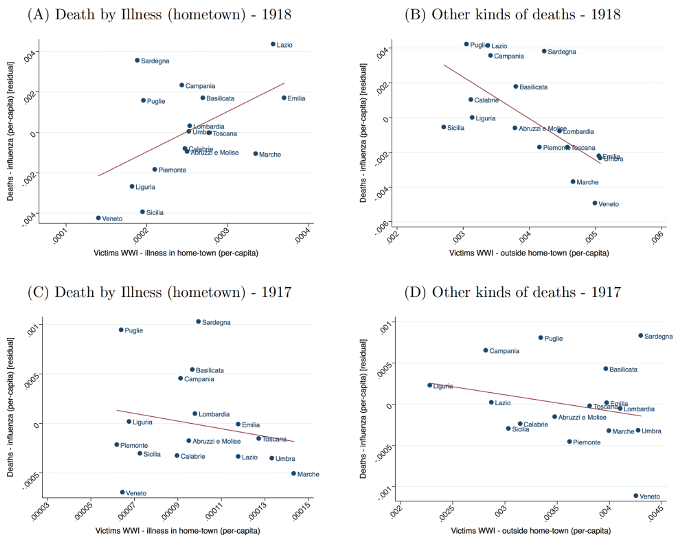 Consistent with our hypothesis, this correlation does not hold for other years of the war or for the number of military victims from the broader region outside their hometown. Moreover, the national monthly variation in excess mortality of civilians is highly correlated (=0.874) with the monthly variation of soldiers who passed away because of illness (Figure 2). 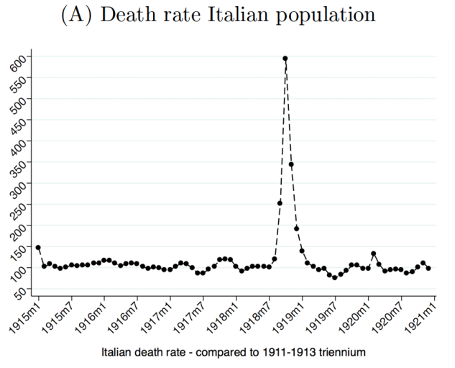 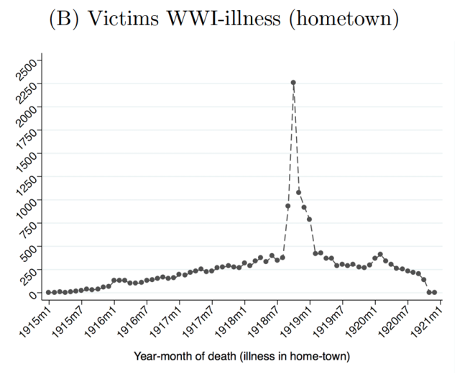 Notes: The top panel shows the Italian death rate over time, according to Mortara (1925). The average in the three-year period 1911-1913 is the benchmark, with a value of 100. The bottom panel shows the number of victims per illness who died in their hometown from ‘Albo caduti’. Correlation = 0.874.

A key aspect of the causal interpretation is that our proxy variable is significantly influenced by an idiosyncratic push factor that is determined by the risk of contagion in the regiments where the soldiers served. More specifically, cities more afflicted by the disease were also the ones whose soldiers happened to be enlisted in regiments with a higher circulation of the virus. We find very limited sorting of soldiers from the same municipality into specific regiments, suggesting that the infection risk is uncorrelated to features of soldiers’ hometowns.

We also generate a measure of inequality at the municipality level by relying on a unique historical source of information on Italian incomes. Specifically, we collected and digitised a series of publications listing individual income declarations for 24 Italian provinces composed of around 2,000 municipalities in 1924. In the early 1900s, this tax was the single largest source of government tax revenue. These publications include individual income data from the universe of taxpayers with income from commercial, industrial, or other professional activities. Figure 3 shows the distribution of different measures of inequality. In addition, we computed the inequality measure for more recent years (2018) to evaluate the effects of the pandemic. 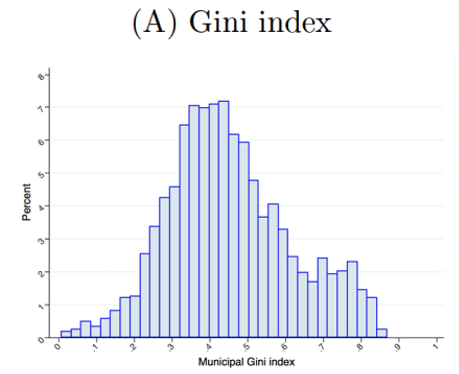 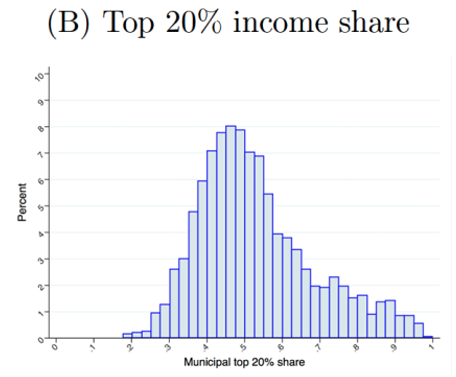 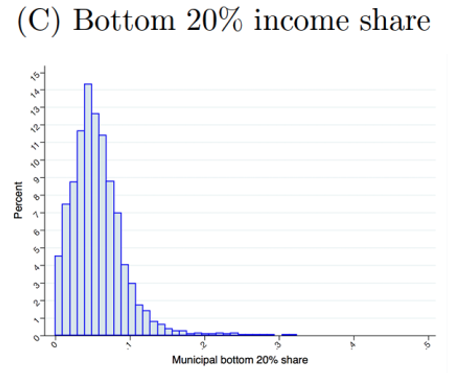 Our results suggest that an increase of one standard deviation in our proxy for pandemic exposure in 1918 caused a 2% increase in inequality as measured by the 1924 Gini index. We confirm this result using a simplified definition of treatment as municipalities that had at least one soldier who died of illness in their hometown during the pandemic, compared to those who did not, report a 3.4% increase in the Gini index. The effect is mostly driven by a significant reduction in the income declared at the bottom of the exposure distribution, while there is no impact at the top of the distribution.

These effects appear to be persistent, as the most severely afflicted municipalities still have more unequal income distribution today, a century later. Figure 4 shows the difference in the average Gini index in 1924 (panel A) and 2018 (panel B) using the simplified definition of treatment. In both cases, there is a significant difference between the two groups, with the municipalities less affected by the pandemic reporting a lower level of income inequality.

Figure 4 Spanish flu and inequality in the long run 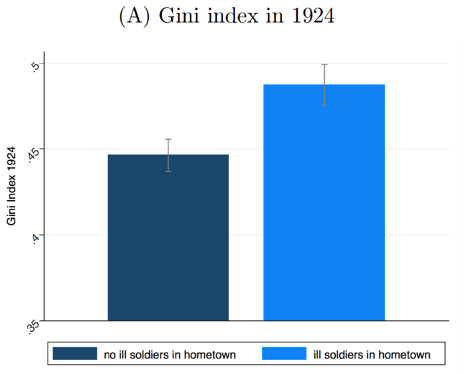 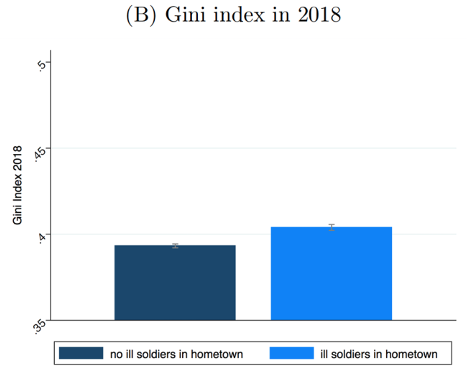 Notes: The figure shows the Gini index in 1924 (top panel) and 2018 (bottom panel) for Italian municipalities between cities were no ill soldiers came back from the front and those with a positive number of ill soldiers who returned in the period August to December 1918.

Based on the Italian experience with the 1918 influenza pandemic, our results suggest that pandemics increase income inequality and such effects could have long-lasting consequences.

Our results are difficult to generalise as they are based on a specific historical event, but they are in line with existing evidence focusing on more recent epidemics as well as early evidence on the effect of COVID-19 (Furceri et al. 2020, Galasso 2020).

While we find an increase in inequality in the short, medium and long term, Carillo and Jappelli (2020) show that in Italy the 1918 influenza pandemic had a negative effect on GDP that disappeared after few years. In light of these potential long-term effects on inequality, our findings call for interventions aimed at attenuating potential distributive consequences to limit the increase in inequality for future generations.