Lambert here: Sorry for the lack of original posts, but our continuing server-side difficulties have made production really, really difficult. Hopefully, we will be back to normal soon.

The Covid-19 pandemic has changed not only how people spend time, but with whom they spend it. Partnered people may be spending more time with a spouse or cohabitor while singles spend more time alone. This column investigates how these changes in time allocation might affect individual feelings of wellbeing. Time diaries from the US and the UK suggest that married couples compelled to spend more time together may experience increased happiness, while the crisis could take an emotional toll on unmarried individuals forced to spend more time alone.

The Covid-19 pandemic has created a remarkable variety of unexpected short-term and possibly longer-term effects on people’s behaviour, the way they work, and their capacities for work. Debates have arisen about how to deal with a resurgence of the pandemic (Gros 2020); economists have rightly considered the possible long-term impacts on children’s development (Fuchs-Schündeln et al. 2020); and, getting closer to the subject discussed here, they have even examined how the pandemic has contributed to anxiety about the labour market and the economy generally (Barrios and van der Wielen 2020).

In a recent paper (Hamermesh 2020), I consider how the pandemic’s substantial effects on the way people work and live might have altered their feelings of general wellbeing. There is no doubt that what we did and with whom we did it changed in wealthy countries during periods of lockdown in spring 2020, and these changes seem likely to be repeated with lockdowns re-instituted this autumn. It is not only the location of work that has been changed. Continued closings or partial shutdowns of restaurants, hotels, theatres, museums, and sports arenas have altered the locations of people’s leisure activities. We are spending more time at home, whether working or not.

Economists assume that people seek to make themselves as happy as possible – given their ability to earn an income and the other non-work income to which they have access – by spreading their spending across various goods and services. Becker (1965) pointed out that spending also takes time. A one-week holiday could be taken ‘on the cheap’ camping in a national park, or the same-length holiday could be spent traveling to the Loire Valley, eating at Michelin-starred restaurants, and staying in luxury hotels. The same amount of time, but significantly more money-per-hour spent during the Loire holiday.

Who you spend time with also affects your happiness. The same activity can be enjoyed with different people present. A sex act could be performed with one’s spouse, one’s friend, a stranger, or by oneself. Same time, same money spent, but with a different person (or no one else) present; and in each case the enjoyment might differ.

The altered constraints on whom we spend time with imposed by the Covid-19 crisis might have affected human happiness. Regrettably, we do not yet have data on how people spent time and with whom they spent it during the crisis period. But we do have lots of data on how people’s satisfaction with life differs depending on what they do, and with whom they do it, that allow us to simulate those effects. In 2012 and 2013, the US collected time diaries – minute-by-minute recollections of what people were doing at every moment of the previous day and, for most activities, who if anyone else was present. The UK collected similar diaries in 2014–15.

In each case, I adjust for a large number of other factors that might alter feelings of satisfaction with life – including age, level of education, race/ethnicity, household income, region of residence and (for the US) immigration status. Most important, for each person I adjust for how they spent their 24 hours of the day across paid work, home production, sleep, other personal care, television-watching, and other leisure activities – a useful categorisation described by Hamermesh (2019). What is left is an ‘other things equal’ measurement of the impact that whom time is spent with has on life satisfaction.

Accounting for all these other factors, married people are more satisfied with life if they spend more time with their spouse, and less satisfied the more time they spend alone. Additional time spent with other people raises their life satisfaction, but by much less than does additional time with their spouse. Among singles, other things equal, the biggest changes (reductions) in their satisfaction with life occur when they spend more time alone.

Among marrieds, the average person in the US spent 4.5 of his or her waking hours engaged in activities for which the spouse was present; the average UK spouse spent 11.5 of each 24 hours with his/her spouse. Figures 1a and 1b demonstrate for the US and UK, respectively, how additional time spent with one’s spouse changes the probability that an individual is considered satisfied with life. In both countries, the best estimate is that more time spent with a spouse raises life satisfaction, albeit the increase is not uniform over the entire range of time spent (from zero hours in a day to 15 hours in the US and to 24 hours in the UK). 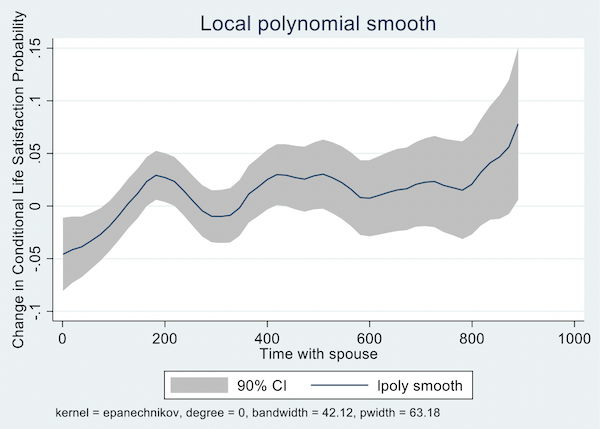 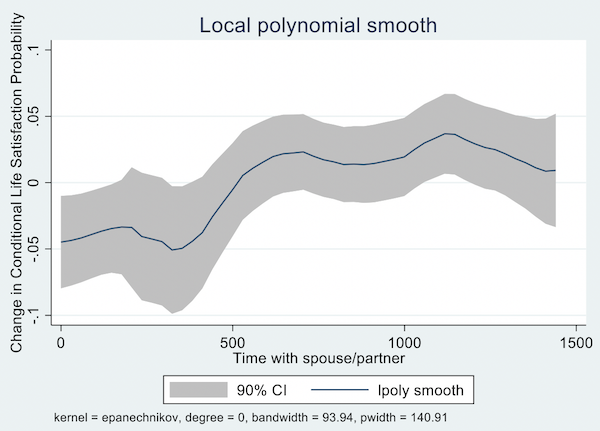 The average unmarried individual in the US spends over six waking hours alone, while the average UK unmarried person is alone for 11.5 hours of each day. Figures 2a and 2b demonstrate how additional time spent alone reduces an unmarried person’s satisfaction with life, although here too the (negative) effect of additional time varies as more time is spent alone. Spending more time alone in both countries reduces the likelihood that a person conveys satisfaction with life. 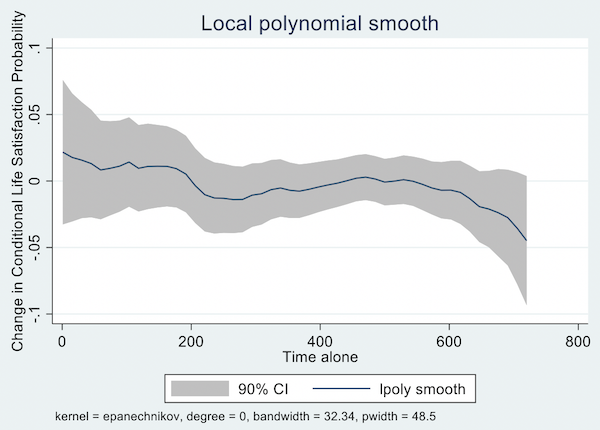 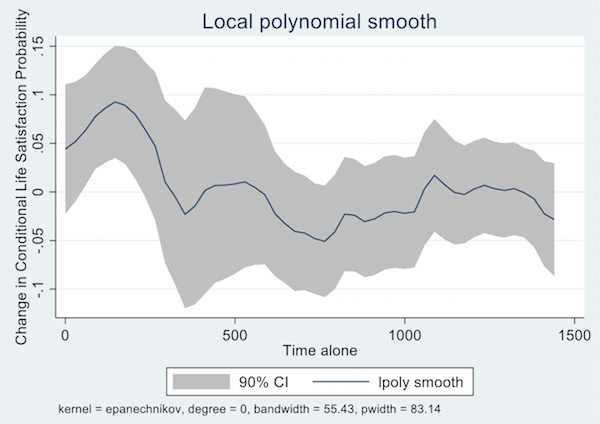 All of these effects are somewhat stronger and more significant statistically if we examine the impact of how and with whom people spent time on the entire ladder of responses rather than on the simple satisfied-or-not dichotomy. The main point is that additional time with one’s spouse makes a married person more satisfied with life, while additional time alone reduces single people’s life satisfaction.

The Covid-19 crisis has forced married couples to spend more time together (and less time alone and with others). It has forced single people to spend more time alone. We do not know how much more time in each case, so we have to guess. Let’s assume that among marrieds, the time reported as being spent with others has been shifted to time with one’s spouse, and that one third of work time has been shifted to television-watching. In that case, using the estimates from the US and UK time-diary data, the average spouse would be six percentage points more likely to report satisfaction with life, an increase of about 10% in the average percentage of spouses reporting that they are satisfied. Among singles, assuming that time spent with others was shifted to time alone and that one third of work time was switched to television-watching, the likelihood of stating that one is satisfied with life drops by 5%, also about a 10% change.

These simulations are based on assumptions about how people’s allocation of time might have changed during lockdowns and other Covid-19 induced restrictions. Making stronger assumptions, such as assuming that incomes are reduced by the Covid-19 crisis, reduces the simulated increase in spouses’ life satisfaction and exacerbates the estimated decline in the life satisfaction of unmarried people. Also, these simulations say nothing about how the fear of infection – the uncertainty about life – that the crisis may have induced could have altered people’s life satisfaction. They simply point out and, more important, estimate the extent to which married individuals forced to spend more time together may have been happier with their lives because they could spend more time with their favourite person, their spouse. And they demonstrate that the crisis may have had additional negative impacts on unmarried individuals by forcing them to spend more time alone.