Yves here. It’s noteworthy that a mainstream venue like The Conversation would run a piece that describes how the Biden approach to China and Russia is backfiring. While the press spoke in almost one voice against Trump’s policies towards China and Russia, even when it was aghast at Trump’s belligerence, I believe most countries on the receiving end discounted it as bluster and would wait to see what if any actions would follow.

By contrast, the campaign pitch for Biden was that his leadership would put the adults back in charge. Yet it’s been hard to ignore the stunning and pointless Biden slap at Putin, shortly followed by the train wreck of the China summit in Alaska. The incoming team is managing the difficult task of making Trump look not terrible. Those who have met Trump say he’s usually affable, even charming in a meeting, even though he’s likely to screw you in the 24 hours after that.

So the big difference is the US press (for the most part) not calling out these Biden bombs. Funny that.

The past week has marked a watershed moment in Russia’s relations with the West — and the US in particular. In two dramatic, televised moments, US President Joe Biden and Russian President Vladimir Putin have changed the dynamics between their countries perhaps irrevocably.

Most commentators in the West have focused on Putin’s “trolling” of Biden by dryly — though, according to Putin, unironically — wishing his American counterpart “good health”. This, of course, came after Biden called Putin a “killer”.

But a more careful and complete reading of Putin’s message to the US is necessary to understand how a Russian leader is, finally, ready to tell the US: do not judge us by your claimed standards, and do not try to tell us what to do.

Putin has never asserted these propositions so bluntly. And it matters when he does

Putin’s Message to the New US President

The tense test of strength began when Biden was asked about Putin in an interview with ABC News’ George Stephanopoulos and agreed he was “a killer” and didn’t have a soul. He also said Putin will “pay a price” for his actions.

Putin then took the unusual step of going on the state broadcaster VGTRK with a prepared five-minute statement in response to Biden.

In an unusually pointed manner, Putin recalled the US history of genocide of its Indigenous people, the cruel experience of slavery, the continuing repression of Black Americans today and the unprovoked US nuclear bombing of Hiroshima and Nagasaki in the second world war.

He suggested states should not judge others by their own standards:

Whatever you say about others is what you are yourself.

Some American journalists and observers have reacted to this as “trolling”. It was not. 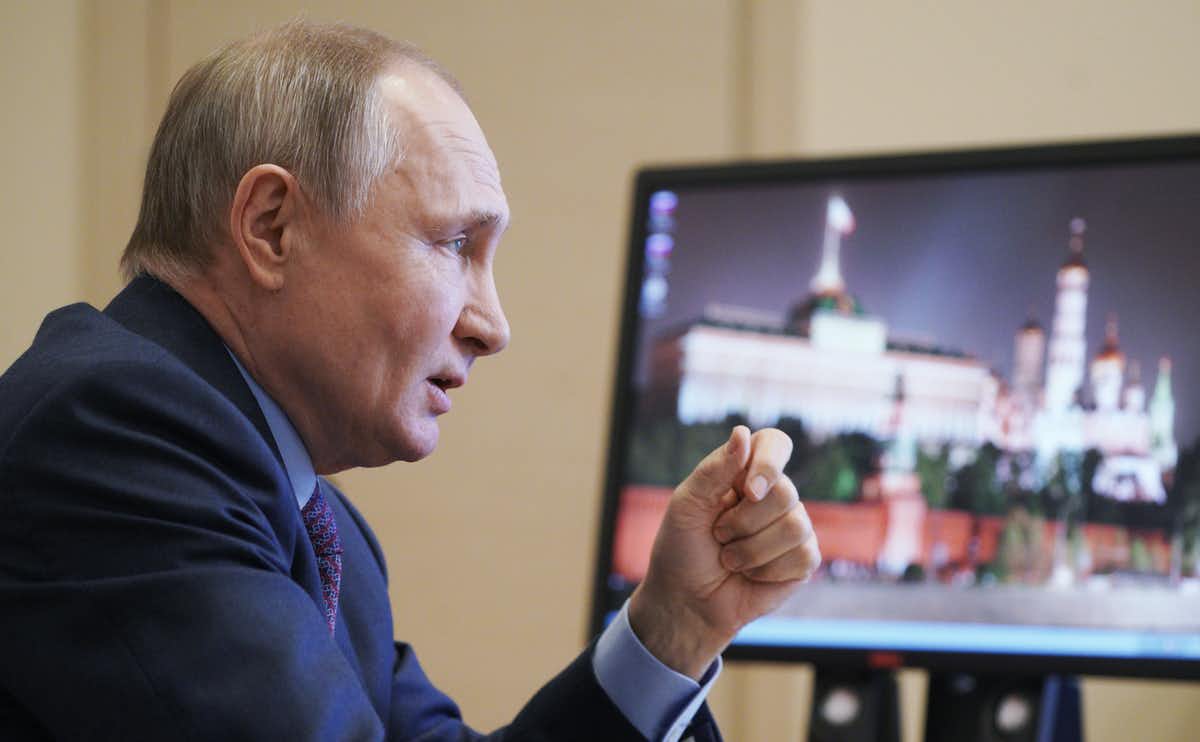 It was the preamble to Putin’s most important message in years to what he called the American “establishment, the ruling class”. He said the US leadership is determined to have relations with Russia, but only “on its own terms”.

Although they think that we are the same as they are, we are different people. We have a different genetic, cultural and moral code. But we know how to defend our own interests.

This is new for Putin. He has for years made the point, always politely, that Western powers need to deal with Russia on a basis of correct diplomatic protocols and mutual respect for national sovereignty, if they want to ease tensions.

But never before has he been as blunt as this, saying in effect: do not dare try to judge us or punish us for not meeting what you say are universal standards, because we are different from you. Those days are now over.

China Pushing Back Against the US, Too

Putin’s forceful statement is remarkably similar to the equally firm public statements made by senior Chinese diplomats to US Secretary of State Antony Blinken in Alaska last week.

Blinken opened the meeting by lambasting China’s increasing authoritarianism and aggressiveness at home and abroad – in Tibet, Xinjiang, Hong Kong and the South China Sea. He claimed such conduct was threatening “the rules-based order that maintains global stability”.

The US does not have the qualification to say that it wants to speak to China from a position of strength. The US uses its military force and financial hegemony to carry out long-arm jurisdiction and suppress other countries. It abuses so-called notions of national security to obstruct normal trade exchanges, and to incite some countries to attack China.

He said the US had no right to push its own version of democracy when it was dealing with so much discontent and human rights problems at home.

Russia and China Drawing Closer Together

Putin’s statement was given added weight by two diplomatic actions: Russia’s recalling of its ambassador in the US, and Foreign Minister Sergey Lavrov’s meeting in China with his counterpart, Wang Yi.

Beijing and Moscow agreed at the summit to stand firm against Western sanctions and boost ties between their countries to reduce their dependence on the US dollar in international trade and settlements. Lavrov also said,

We both believe the US has a destabilising role. It relies on Cold War military alliances and is trying to set up new alliances to undermine the world order.

Though Biden’s undiplomatic comments about Putin may have been unscripted, the impact has nonetheless been profound. Together with the harsh tone of the US-China foreign ministers meeting in Alaska — also provoked by the US side — it is clear there has been a major change in the atmosphere of US-China-Russia relations.

What will this mean in practice? Both Russia and China are signalling they will only deal with the West where and when it suits them. Sanctions no longer worry them.

? #Lavrov: #China ?? is a truly strategic partner and a like-minded country for #Russia ?? Our cooperation on the international stage is having a stabilising effect on the global and regional situation.

The two powers are also showing they are increasingly comfortable working together as close partners, if not yet military allies. They will step up their cooperation in areas where they have mutual interests and the development of alternatives to the Western-dominated trade and payments systems.

Countries in Asia and further afield are closely watching the development of this alternative international order, led by Moscow and Beijing. And they can also recognise the signs of increasing US economic and political decline.

It is a new kind of Cold War, but not one based on ideology like the first incarnation. It is a war for international legitimacy, a struggle for hearts and minds and money in the very large part of the world not aligned to the US or NATO.

The US and its allies will continue to operate under their narrative, while Russia and China will push their competing narrative. This was made crystal clear over these past few dramatic days of major power diplomacy.

The global balance of power is shifting, and for many nations, the smart money might be on Russia and China now.

Read more: Nato-Russia tensions: what a Biden administration can do to lower the temperature