Yves here. Richard Murphy is writing from a UK vantage, and the UK has reasons to curb its cheer. Even if the Covid front looks oh so much better, it’s still awfully close in geographical terms to the EU, which is undergoing yet another surge. And there’s Brexit to dampen the economy too. But the optimism in the US seems to be running ahead of events too (although Lambert’s one-stop Greed & Fear index was only at a mildly elevated 58 yesterday).

Remember that the US is 8th in vaccination progress. From Statista as of March 17: 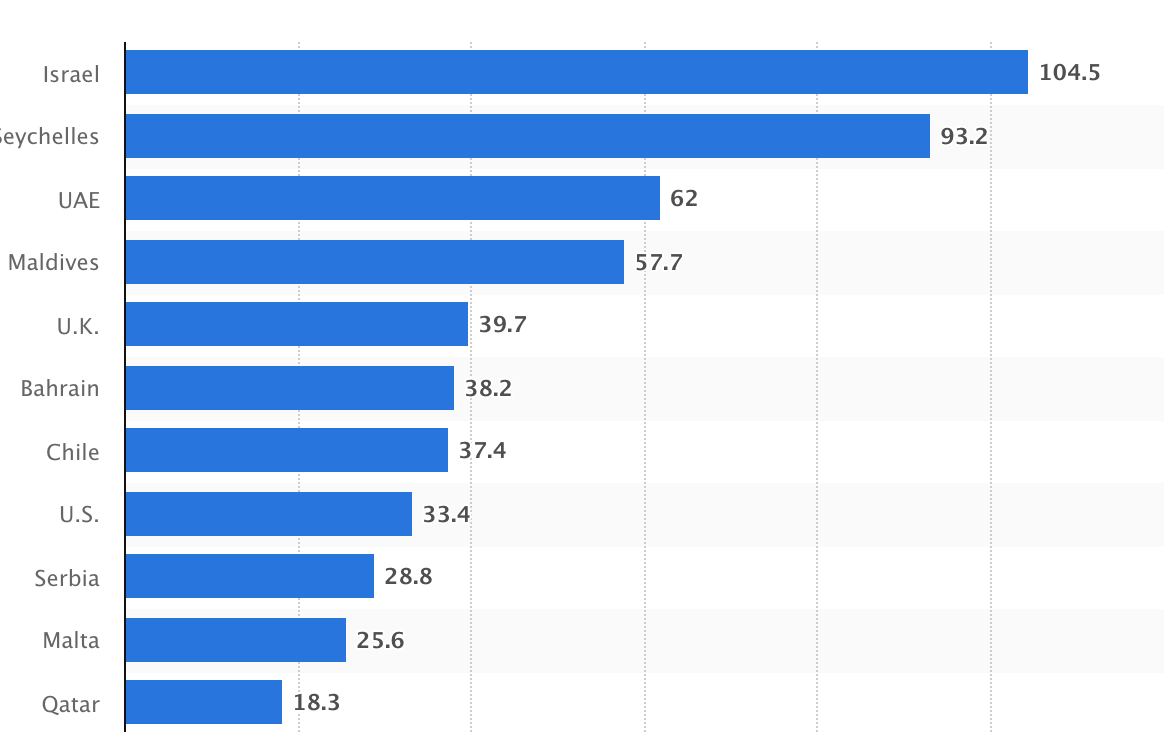 And Nature explained on the 18th why herd immunity to Covid is “probably impossible” (hat tip Michael M):

That threshold is generally achievable only with high vaccination rates, and many scientists had thought that once people started being immunized en masse, herd immunity would permit society to return to normal. Most estimates had placed the threshold at 60–70% of the population gaining immunity, either through vaccinations or past exposure to the virus. But as the pandemic enters its second year, the thinking has begun to shift. In February, independent data scientist Youyang Gu changed the name of his popular COVID-19 forecasting model from ‘Path to Herd Immunity’ to ‘Path to Normality’. He said that reaching a herd-immunity threshold was looking unlikely because of factors such as vaccine hesitancy, the emergence of new variants and the delayed arrival of vaccinations for children.

Gu is a data scientist, but his thinking aligns with that of many in the epidemiology community. “We’re moving away from the idea that we’ll hit the herd-immunity threshold and then the pandemic will go away for good,” says epidemiologist Lauren Ancel Meyers, executive director of the University of Texas at Austin COVID-19 Modeling Consortium. This shift reflects the complexities and challenges of the pandemic, and shouldn’t overshadow the fact that vaccination is helping. “The vaccine will mean that the virus will start to dissipate on its own,” Meyers says. But as new variants arise and immunity from infections potentially wanes, “we may find ourselves months or a year down the road still battling the threat, and having to deal with future surges”.

The main points in the article are:

However, its detailed vaccination progress chart paints a cheerier picture for the US than the overall one above did: 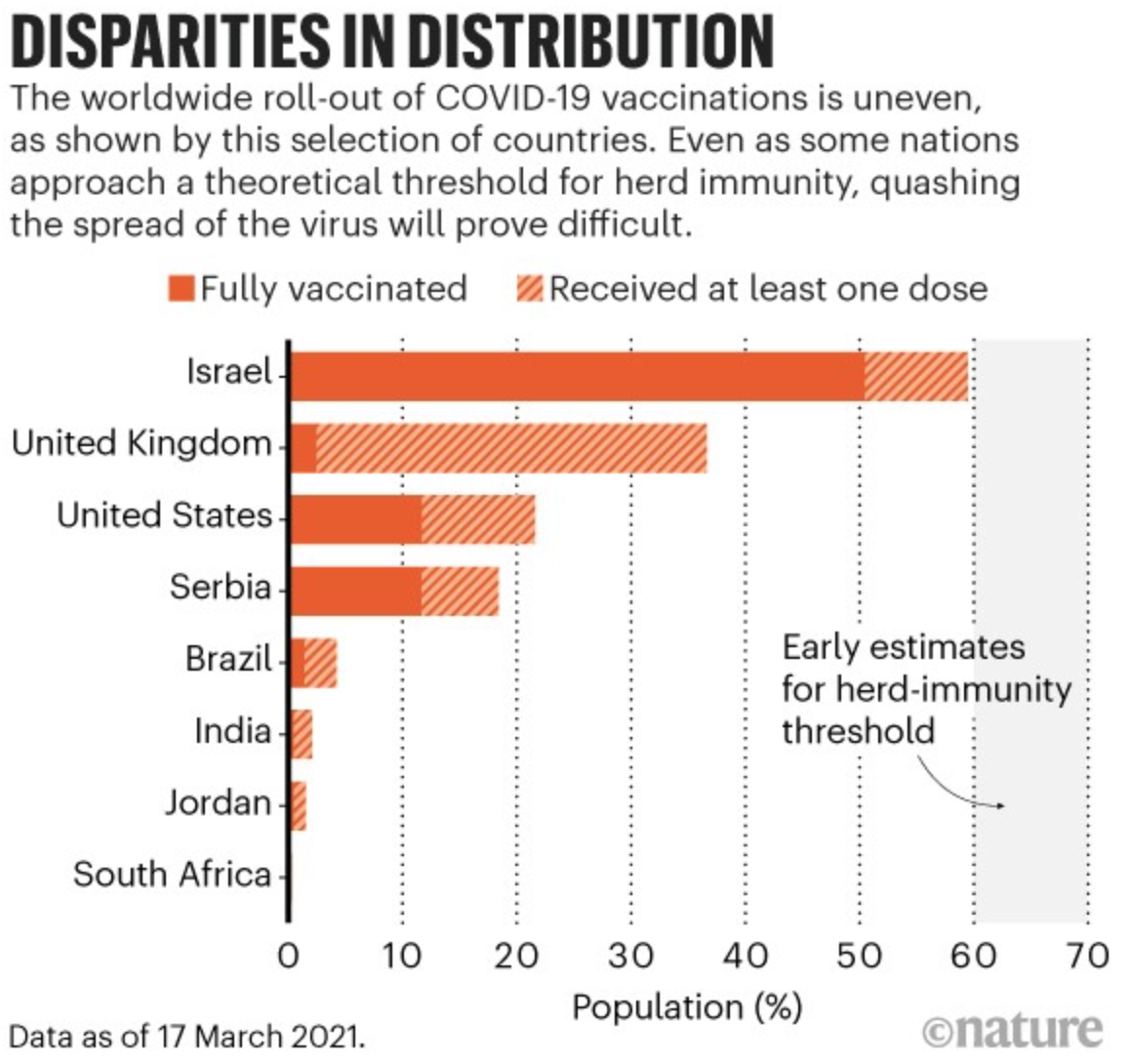 But in the US we also have some other big shoes to drop, despite the size of the stimulus package that is rolling out, like what to do about the residential and commercial rent arrearages that are too large for most of the tenants to pay off?

The FT has reported this morning that:

The planned reopening of the economy, the Budget’s renewed support for workers and businesses, and the rapid vaccine rollout have boosted UK consumer confidence to the highest level since before the first lockdown last March, fuelling hopes of a spending rebound.

It is said that the fool and their money are easily parted, and I cannot help but think that there is a great deal of foolishness  in the mood of the nation at present. The only comfort in that is that the so-called Covid bounce for the government may be as misplaced.

To be blunt, I very much doubt that we are going to see the summer that so many (me included, if I am completely honest) would like to look forward to.

Europe is already heading into third wave Covid lockdowns. The NHS is actively preparing for the same to happen here, before the summer.

The widespread assumption that the Covid pandemic us over as far as the UK is concerned could well be wrong. For a start, we now face a different pandemic from that which we faced last year : the virus has mutated.

And in the face of that England (but not Wales and Scotland, where vaccination has been considerably better managed) faces the nightmare scenario of having a half vaccinated, and so still intensely vulnerable, population in which the opportunity for the rampant spread of vaccine immune variants is high.

We know such spread is possible. Healthcare is collapsing in Brazil right now.

We also know that the AZ vaccine offers little protection against variants; Pfizer maybe a bit more, and Moderna has yet to appear on the scene.

And it is now apparent that in the politically motivated rush for single jabs which do not provide vaccination, whatever politicians might claim, but which are simply the first dose of a course that might do so, there has already been gross mismanagement because it is now becoming  apparent that sufficient vaccine to guarantee the delivery of the absolutely essential second doses may not have  been held back.

In the meantime cases are rising, most especially amongst the young. There are arguments to be had about the testing: lateral flow tests are notoriously  unreliable. But the problem is that this was also the pattern last September.

In fact, the apparent euphoria of this moment feels rather like last August, which was very obviously a false period of hope when seen in retrospect. So too might this moment be just that. If cases rise, vaccines are denied, second doses do not happen on time, and the progression that the NHS fears towards another outbreak occurs rather than the virus following the government’s roadmap, then we are in deep trouble. And this moment of optimism will be shown to have been deeply misplaced.

I could be wrong about this, of course. I would like to be. But my instincts tell me that this mood of optimism in the country is misplaced.

This also suggests something else. That is that the sense of disappointment that might follow the crushing of hope that the government has unwisely created will be intense. It might even turn to anger. We may not be in for the summer we hoped for, but that does not mean it may not be eventful, in all the wrong ways.