Yves here. This article provides an interesting counterargument to the widespread belief that Covid-related stimulus will generate inflation. Aside from the fact that the economy was below capacity before the Covid crisis (supported by the high level of involuntary part-time employment) and therefore its ability to support more demand is likely high than deficit hawks would have you believe, the lack of labor bargaining power will seriously dampen any one-shot spending from producing sustained wage gains. And remember, in an services-dominant economy, labor costs are the single biggest cost category.

And I am very fond of this sort of analysis. Ken Rogoff’s and Carmen Reinhardt’s study of 800 years of financial crises produced the important finding that high levels of international capital flows are strongly correlated with financial blowups.

In economic terms, the battle against the Covid-19 pandemic is often compared to a war – national resources have been commandeered in the battle against an ‘invisible enemy’, driving government debt levels sharply higher around the world (Baldwin and Weder di Mauro 2020). For financial markets, one worrying aspect of this analogy is that the aftermaths of major wars have often been associated with rising inflation, high bond yields, and financial disruption.

But how close does the ‘pandemic as war’ analogy hold in practice? In a recent paper, we used data extending back to the Black Death in the 1300s to compare how inflation and government bond yields have behaved in the aftermath of history’s 12 largest wars and pandemics (Daly and Chankova 2021).

From Covid-19 to the Black Death: Very Long-Run Data on Inflation and Bond Yields

Our inflation and bond yield data come from two separate sources, both from economists at the Bank of England (Bank of England 2021, Schmelzing 2020), and our country sample consists of France, Germany, Italy, Netherlands, the UK, Spain, the US, and Japan.1

Table 1 Our sample of major wars and pandemics

Wars Result in Higher Inflation and Bond Yields, Pandemics Do Not

Figure 1 displays the median behaviour of inflation around major wars, together with its interquartile range (and also a median based only on global wars in our sample). Inflation has typically risen sharply both during and – especially – in the aftermath of major wars, with median inflation peaking at 8% one year after the war has ended. 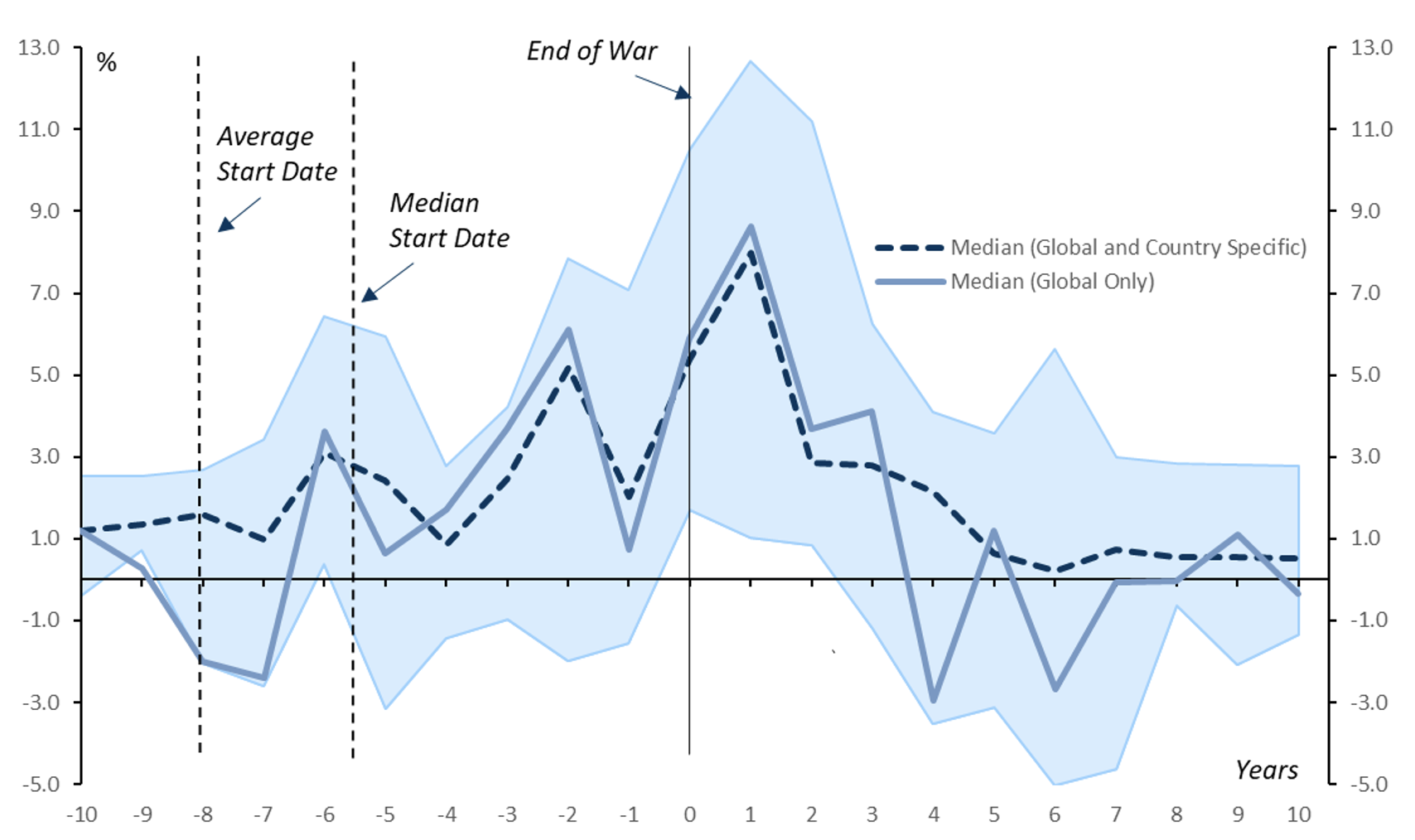 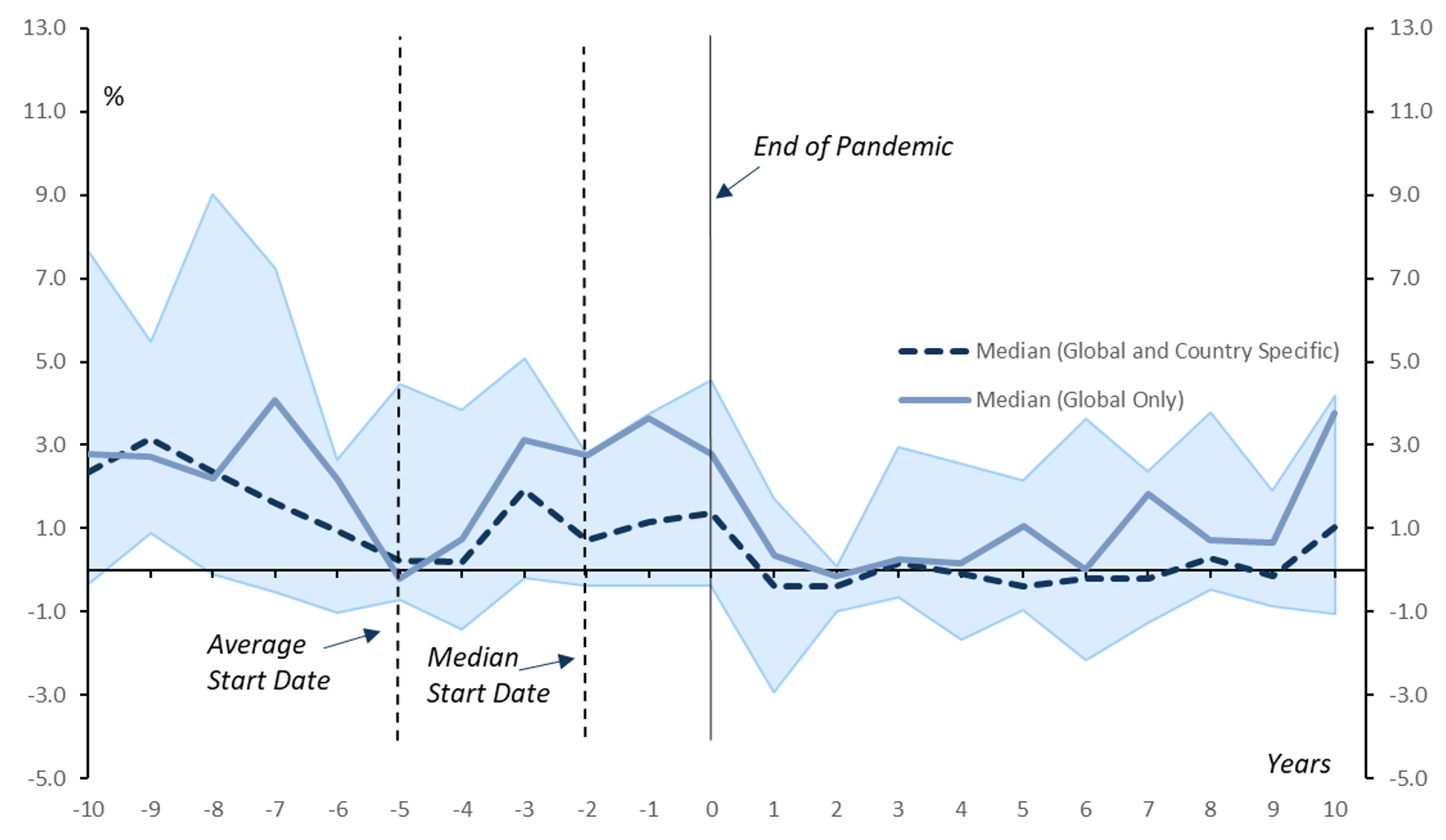 The contrast between the behaviour of inflation following wars and following pandemics is particularly clear in Figure 3, which plots median inflation rates across the 12 wars and pandemics. 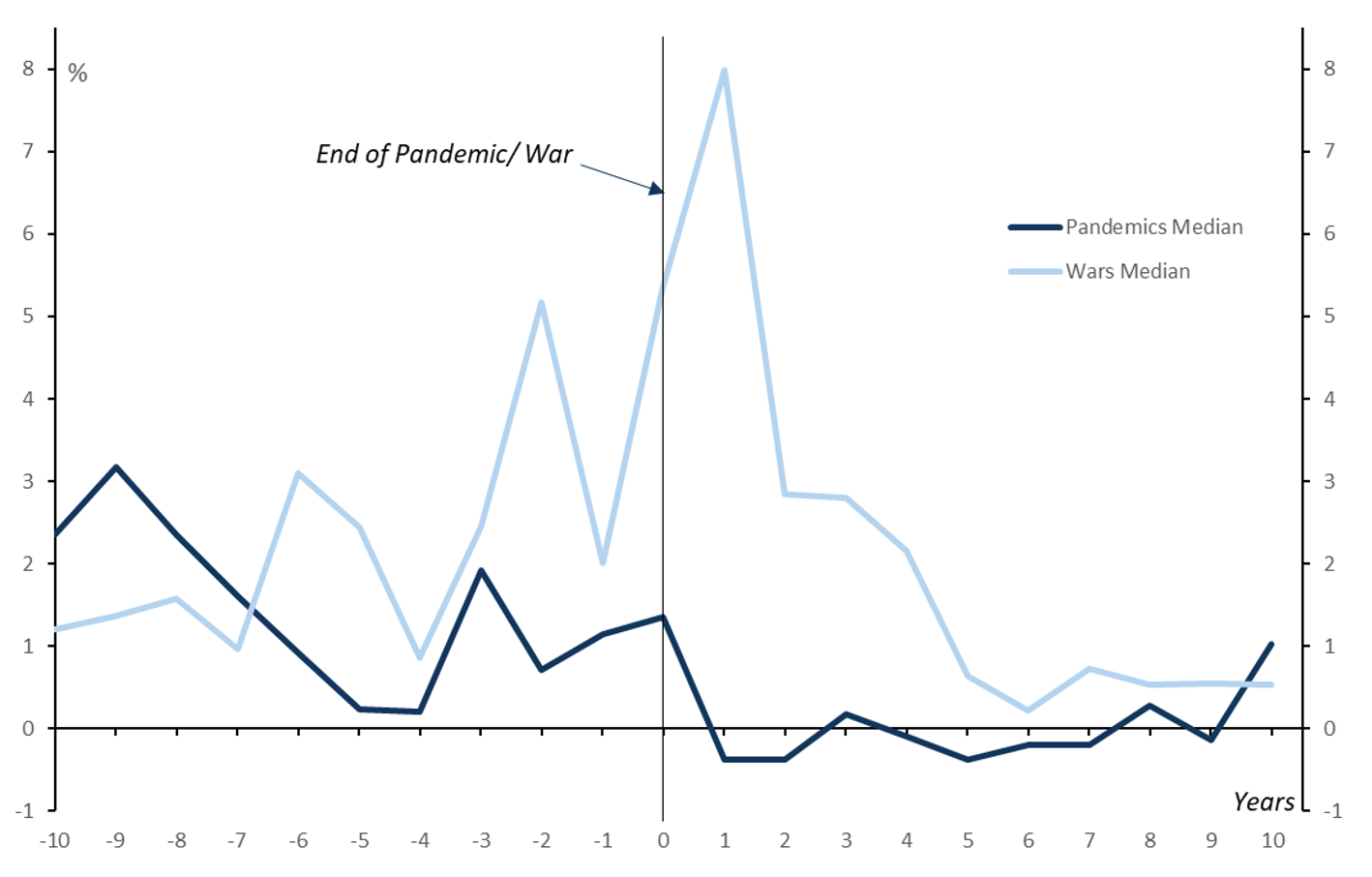 In Figure 4, we set out the same comparison for nominal government bond yields.4 Bond yields have typically risen during wars, with median bond yields increasing by around one percentage point to a peak of 6.4% in the final year of the war. By contrast, during pandemics, median bond yields remained stable at around 5.5%, before declining in the years following the pandemic.

Figure 4 Bond yields rise much more during wars than pandemics 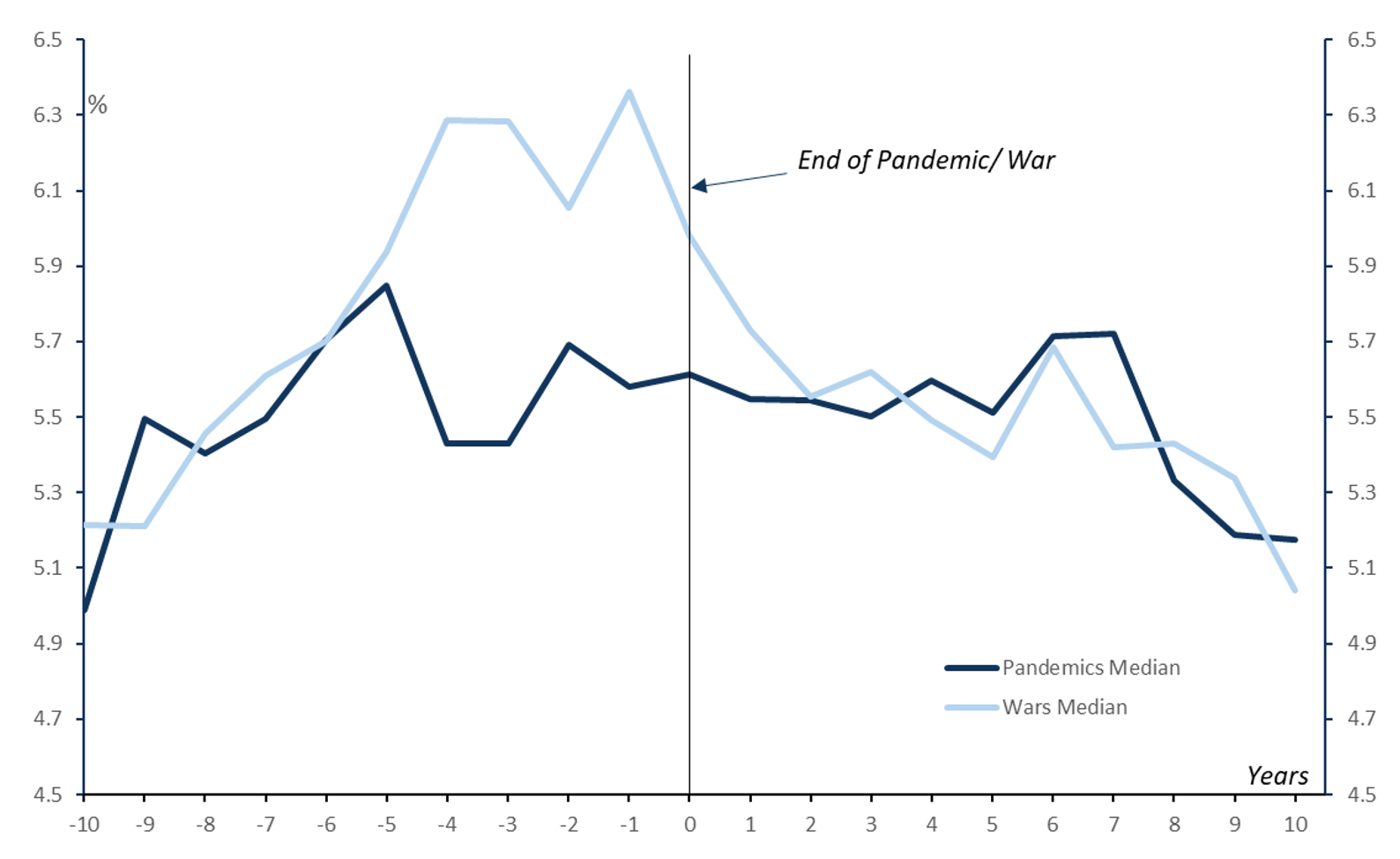 Lessons from the Past: From the World Wars to the Black Death

Averaging across a number of wars and pandemics can obscure important details. It is therefore instructive to also explore some key episodes in a little more detail, to see how the contrasts between wars and pandemics have played out:

Notes: Evolution of GDP growth and inflation between 1910 and 1950 in the UK, US, and Germany. Sources: Goldman Sachs Global Investment Research, Bank of England (2021), Schmelzing (2020), Maddison.

Why Wars Are Different from Pandemics: Wars Result in Overheating and the Destruction of Physical Capital

The contrast between the performance of inflation and bond yields during wars and pandemics makes intuitive sense, in our view, for two reasons:

Higher Inflation Is Not a Natural Consequence of Pandemics

Every war and pandemic is different, and we should be cautious of drawing lessons from events that occurred in the long-distant past and in very different circumstances. One feature of the current pandemic that is clearly distinctive to past episodes is the size of the government response. Equally, however, one can argue that an unusually large government response was necessitated by an unusually large collapse in private sector demand.7

What is clear is that history provides no evidence that higher inflation or higher bond yields are a natural consequence of major pandemics.

None of this precludes the possibility that higher inflation might result as a policy choice in the face of elevated debt levels. Higher inflation can bring welcome relief to debtors, including the government, by eroding the real value of their obligations. Faced with the choice of reducing debt through austerity or inflation, it is possible that policymakers might ‘choose’ higher inflation to help limit the need for tax rises and/or government expenditure reductions.

However, such a policy would require the cooperation of central banks to keep interest rates low, even as inflation is rising. And, in a world of independent central banks, even this route towards higher global inflation appears less likely than it did during past crises.