As many of you know, the UK declared July 19 as Freedom Day, when nearly all remaining Covid restrictions were to end. We didn’t say much about it because so many in the Twitterverse and the British press declared it to be a terrible idea, given that only 56% of the population was fully vaccinated (although that does amount to 68% of adults). That’s not enough to reduce R0 to below 1, given how contagious the Delta variant is.

It didn’t get off to a good start. From Reuters:

Prime Minister Boris Johnson’s ‘freedom day’ ending over a year of COVID-19 lockdown restrictions in England was marred on Monday by surging infections, warnings of supermarket shortages and his own forced self-isolation….

But Johnson’s big day was marred by “pingdemic chaos” as a National Health Service app ordered hundreds of thousands of people to self-isolate – prompting warnings supermarket shelves could soon be emptied….

Britain has the seventh highest death toll in the world, 128,708, and is forecast to soon have more new infections each day than it did at the height of a second wave of the virus earlier this year. On Sunday there were 48,161 new cases.

Yet here we are, a bit over a week later, and UK Covid cases are down, despite the announcement of what looked to be superspreader events in the making.

Here are two contrasting takes, the first from the Financial Times, which takes the fall at face value, and then from Richard Murphy, who speculates that it is to a significant degree a data artifact. Of course, this could also be “Covid moves in mysterious ways” (recall the unexpected decline in the US after the year end through third week of January surge, which was anticipated to get even worse) or another example of Boris Johnson again being lucky.

First from the Financial Times:

A sharp fall in the number of people in the UK testing positive for Covid-19 over the past six days has surprised and delighted scientists who feared that cases would rise towards 100,000 a day, as health secretary Sajid Javid had warned in early July.

The latest daily count of 24,950 new cases, released on Monday afternoon, was the sixth successive decline — less than half the peak of 54,674 reached on July 17 and the lowest for three weeks… 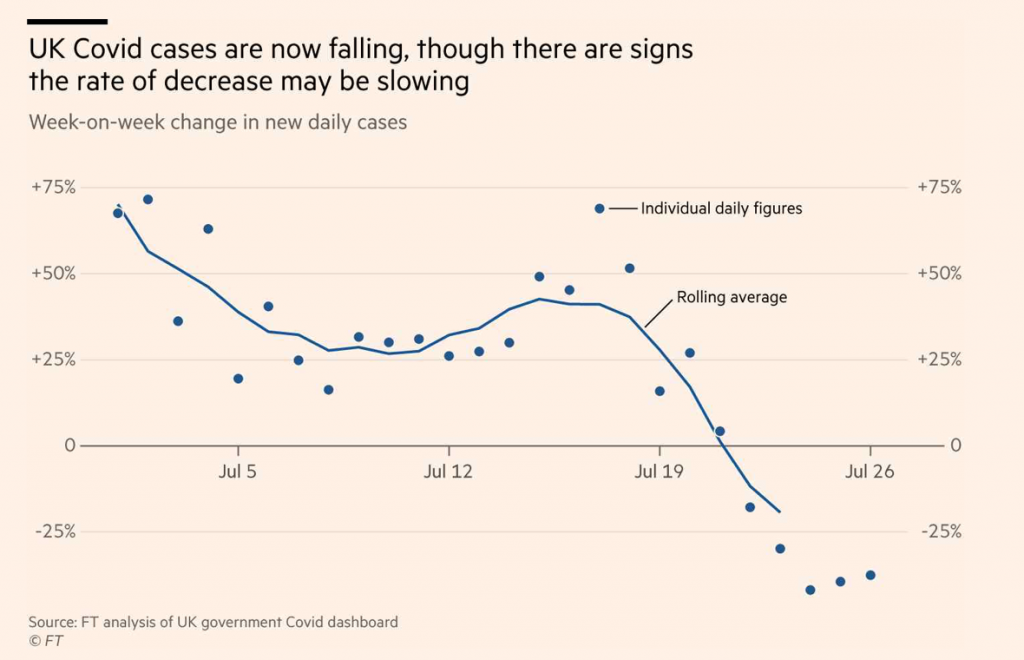 But other experts said they had already dismissed scenarios in some epidemiological models that showed positive tests increasing beyond 100,000 a day later in the summer as a consequence of the government removing almost all legal curbs on social interactions from July 19….

The reasons why cases are dropping so fast now — and the prospects for the next few weeks and months — are far from clear, so Downing Street struck a cautious tone on Monday….

“The daily test numbers will only begin to see the effect of the end of lockdown towards the end of this week,” said Professor James Naismith of Oxford university, director of the Rosalind Franklin Institute….

Finn listed some of the factors at play, including infection-induced immunity, vaccine-induced immunity, and behaviour. “We still have enough non-immune people around to reverse this trend if we completely stop trying to avoid spreading the infection,” he said. “But with every passing day another cohort of people, recently immunised, is added to our protection alongside those who have recently had the infection, survived and recovered.”….

Some of the past week’s fall in cases may be due to a decline in the number of people taking Covid-19 tests, perhaps because they want to avoid self-isolation, but experts say the drop is too steep for that to be the main reason.

Another factor may be being past the Euro 2020 football events. Fans would congregate at pubs and homes to watch and cheer.

Hospitalizations, which lag, have not yet moved down.

Now to Richard Murphy. Note that he was highly critical of the “Freedom Day” gambit.

On 17 July there were 54,674 new Covid cases. There were forecasts that cases could reach well over 100,000 a day. On the basis of reasonable exponential growth expectations that seemed likely. And on July 25 there were 29,173 cases.

What is happening? No one can be sure. Hospital admissions and deaths are, of course, lagged, so they will still rise for a while even if this data is true, which it could be.

And, there again, it might not be. Let’s consider those possibilities.

First, schools in England, and more especially the parents of schoolchildren in England, are not requiring testing anymore as it is summer holiday. So who knows if there are cases there?

Second, people want their summer holidays. Why are they going to get tested, which might prevent that?

Third, they are told there is a ‘pingdemic’ so they delete the NHS app and do not report that they have a positive test, even if they have one.

And fourth, they just don’t care anymore: they are now convinced reporting having Covid does not help, so they are not doing so.

What is the chance that these factors are the dominant strain in the reactions to ‘Freedom Day’? Right now I think they are likely. And as evidence, I note that the so-called Zoe app, which measures case rates voluntarily reported by a rather self-selected cohort, thinks that they are still rising. https://covid.joinzoe.com/data#interactive-map

Let’s be clear: I do not know what is happening. But given all the narratives that are being pumped out by the government and media I think the likelihood that cases are simply not being reported anymore is very high indeed. And that is worrying.