Yves here. Sorry for the patchy programming. We had an original post for today fall through, but we do have another entry in the CalPERS shaggy dog story launching later, hopefully right before Water Cooler, so stay tuned. But this does give us the opportunity to feature this post on the latest sobering Amazon news.

The sixth major assessment of climate science from the Intergovernmental Panel on Climate Change (IPCC) – which landed with an existential thud on our collective doorstep in August – confirms why we need to be profoundly concerned about parts of the Amazon shifting from a carbon sink to a carbon source, a finding reported in the journal Nature in June.

Just under half of the carbon dioxide (CO2) pumped out by human activity each year accumulates in Earth’s atmosphere. The other 56% is dutifully soaked up by the planet’s oceans and vegetation. That absorption has grown in remarkable sync with emissions themselves, the IPCC noted. There are year-to-year ups and downs, largely associated with El Niño and La Niña, but the average fraction of emitted CO2 going into ocean and land sinks has remained nearly constant for the past six decades.

It’s a prime example of what researchers like to call an “ecosystem service”: something our living planet does that happens to help us out.

A Partial ‘Transition from Carbon Sink to Source’

Ecologists and climate scientists have marveled at the planet’s ever-growing carbon sink even as they’ve worried about its ability to keep up with fossil fuel use. Now, a new Amazon study has yielded the starkest evidence to date of a region where the tide has turned and the landscape is consistently giving up more carbon than it can absorb. If additional land areas become sources instead of sinks over time, it could hobble our ability to slow and eventually reverse the nonstop buildup of CO2 in the atmosphere.

The transition from sink to source in the southeast Amazon became evident through monthly sampling via aircraft from 2010 through 2018: at four sites across the Amazon, as documented in the Nature study led by researcher Luciana Gatti of Brazil’s National Institute for Space Research (INPE). The southeast Amazon falls squarely in the long-time “arc of deforestation” that’s been pushing relentlessly toward the central Amazon.

The other three areas, where forests are less depleted, were found to be either carbon-neutral or serving as weak carbon sinks. But in the southeast Amazon, deforestation and heating are pouring carbon into the atmosphere while cutting back on the region’s carbon absorption.

“Emissions come from fire initially, and later from the decomposition,” said Gatti in an interview. 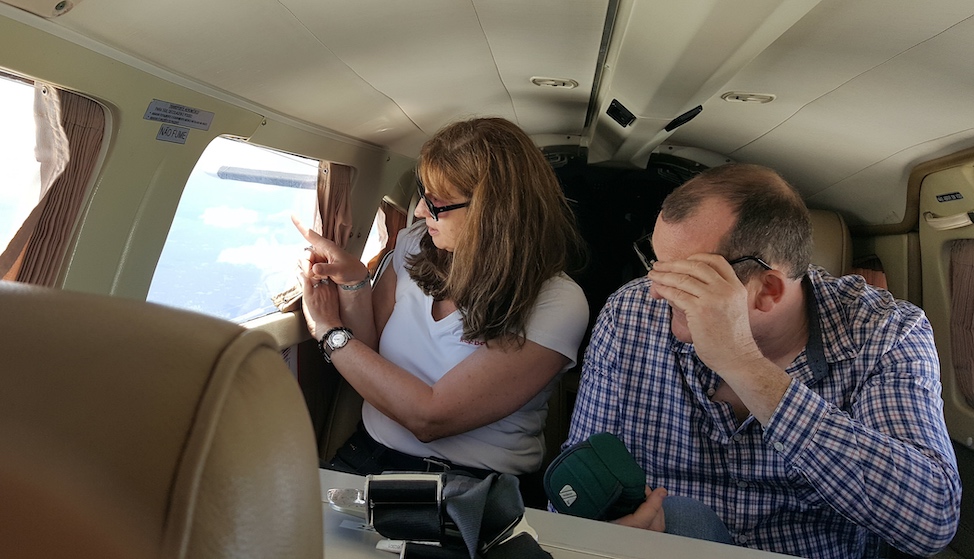 The region is a welter of vicious circles. As trees are cut down or burned, the fragmented landscape heats up more readily. Deforestation and biomass burning means less moisture to be pumped from forests back into the atmosphere by evapotranspiration. All this has helped boost regional temperatures during the dry season, already longer and more distinct here than in other parts of the Amazon. The hotter, drier, and more prolonged fire season, in turn, only enhances blazes and contributes to further tree loss.

According to Gatti, average temperatures for the August-to-September period across the southeast Amazon climbed by 3.1°C (5.6°F) from 1979 to 2019. “This is more than in regions where the glaciers are melting,” she said. “It’s unbelievable.”

Importantly, the study found that the southeast Amazon has become a net source of carbon even when fire-related emissions are factored out. Coauthor Luana Basso (INPE) called out the implications in an email: “Human disturbances are amplifying the cycle of drying and warming, mainly during the dry season, which can reduce the capacity of these forests to store carbon and increase their vulnerability to fires.

“These possible changes in the carbon uptake capacity of tropical forests will require larger reductions in fossil fuel emissions to achieve the main goals of the Paris Agreement.”

Carbon-cycle specialists around the world are now incorporating the results from the southeast Amazon into their sense of where the global carbon balance is heading. “What’s going on in this one area is really important, and possibly an indicator of what’s going to happen more broadly,” said Britt Stephens of the National Center for Atmospheric Research in Boulder, Colo. Stephens has led aircraft campaigns to assess carbon balance by latitude across the Americas. On the global scale, he added, “what really matters is the big picture and the total flux.”

Stephens pointed out that most of the planet remains a carbon sink, a fact that can get lost amid the intense (and well-justified) attention to the Amazon’s deforestation crisis. “Northern mid-latitude forests are taking up a lot more [net carbon] than the tropics,” Stephens said. The new IPCC report asserts that Earth system models underestimate the Northern Hemisphere carbon sink.

There’s been active debate on why the planet-wide carbon sink has managed to grow in lockstep with emissions. The main factor seems to be CO2 fertilization, the ability of trees and plants to grow more rapidly in an atmosphere with more CO2. Of course, trees do not live by CO2 alone: there needs to be enough nitrogen and other nutrients for the fertilization effect to be fully realized. Such cofactors may end up serving as an ultimate brake on the process.

For now, “based on available literature, CO2 fertilization has been the main driver of the observed greening trend,” the new IPCC assessment concludes. However, it adds, “there is only low confidence in this assessment because of ongoing debate about the relative roles of CO2 fertilization, high-latitude warming, and land management, and the low number of models that represent the whole suite of processes involved.”

All things considered, the IPCC found that oceans and vegetation may soon absorb a progressively smaller fraction of carbon dioxide emissions – and the greater the emissions growth, the bigger that absorption shortfall is expected to be (see graphic). There’s already some evidence that the CO2 fertilization effect may be starting to weaken. 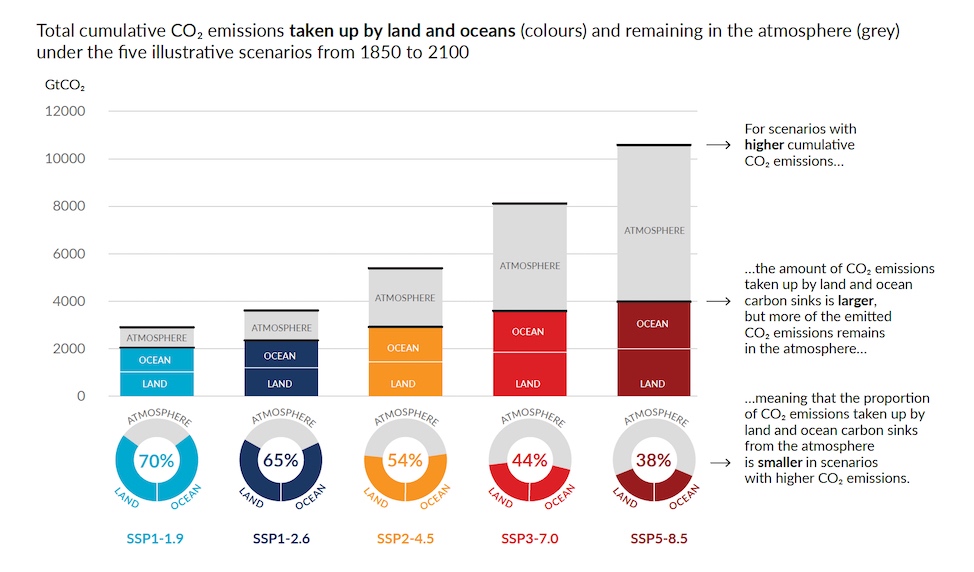 Coming to grips with risks posed by wildfire weather

Wildfire is a massive question mark in the future of northern mid-latitude ecosystems, and one that’s poorly handled in current modeling. The charred summer of 2021 alone has brought California’s second largest wildfire in modern records, the Dixie Fire, which consumed close to a half million acres by mid-August. And in Russia, large parts of the massive Siberian republic of Yakutia (Sakha) have been shrouded in weeks of thick smoke unusual even for this wildfire-accustomed region.

Not only do fires send vast amounts of carbon into the air, but it can take decades for new forests (assuming they take root) to store the same amount of carbon as their predecessors. And the new IPCC report calls out fire weather – especially the increasing, combustible mix of heat and drought – as a crucial compound threat to society.

Along with getting a better handle on fire’s evolving role in the global carbon balance, researchers want to better capture the increase in overall tree mortality in and near deforested parts of the tropics. In a 2018 paper, researchers found that fire-affected forests across the Amazon had roughly a quarter less biomass even after 31 years of recovery. “Our findings indicate that wildfires in humid tropical forests can significantly reduce forest biomass for decades by enhancing mortality rates of all trees,” Camila Silva and coauthors reported. 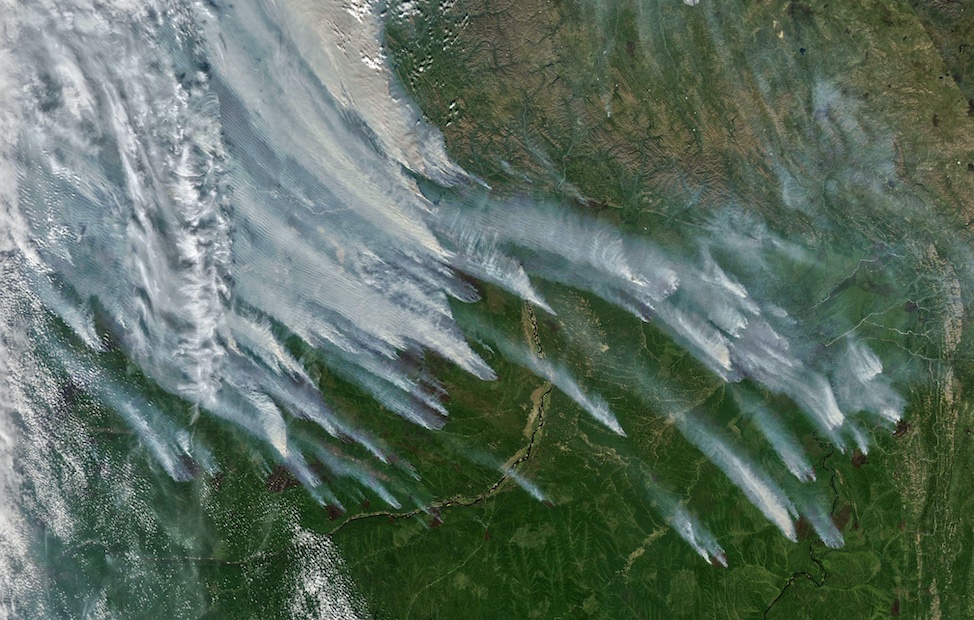 In an essay that accompanied the new Amazon study, climate scientist Scott Denning of Colorado State University noted the paradox of Earth’s continually expanding carbon sink aside the ominous new regional findings. “It’s positively shocking that [globally] plants are growing faster than they’re dying,” Denning wrote in an email. “It was a completely unexpected discovery,” he said, adding that “now there’s a worldwide research effort to understand it.”

The Amazon sampling is part of that observational canvas, which includes more than 800 towers scattered across the globe that measure CO2 fluxes every hour. Also in the mix are satellite-based sampling of landscape greenness, lab and field measurements of tree and soil behavior, and inverse models that use observed levels of carbon dioxide to infer how sinks and sources are feeding into the picture.

Perhaps surprisingly, there’s still a lack of consensus on the extent to which the planet-wide carbon sink depends on uptake from the Amazon and other tropical areas – notwithstanding the other critical functions of these areas, including serving as millennial-scale homelands to Indigenous people and treasure chests of biodiversity.

“Experts disagree vehemently on the relative importance of tropical forests to the global carbon balance,” Denning wrote in an email. “It’s frustrating that we still can’t answer this fundamental question.” One reason it’s such a daunting measurement challenge: There is so much carbon flowing into tropical forests through photosynthesis and flowing out through decomposition. Measuring the relatively small difference between the two is tricky.

While mid-latitude forests have distinct growth and decay seasons, Denning pointed out, “in the tropics it’s always both. The tiny difference between growth and decay has to be measured as a very subtle difference, 24/7/365, and then added up over years.”

Moreover, he wrote, “The conditions are ridiculously hard for almost all the measurements we’d like to make there. It’s almost always cloudy, so it’s hidden from satellite remote sensing. And it’s incredibly vast and remote: thousands of kilometers without roads or hotels or electricity or internet.” Thus, the crucial importance of sampling via aircraft.

More yet to come on Amazon forests

In Brazil, Gatti and colleagues plan to continue to gather data with monthly flights in the Amazon through at least 2022, and they anticipate writing a follow-up paper in 2023. That will take their analysis past the 2018 election of Brazilian President Jair Bolsonaro and into the period of amplified Brazilian deforestation that began in 2019 and surged in 2020. Deforestation from January to July 2021 was up 7.8% over the same period in 2020, according to INPE.

“We know what the carbon balance is,” Gatti says. “Now the idea is to understand better what is happening with the forest. How much is compromised?” Another goal is to help improve how global models depict the rapid heat- and drought-driven trends in the hard-hit, fast-changing southeast Amazon.

Right now, according to Gatti, “the modeling is less realistic than the terrible reality.”