Love your enemy, for you will become him.

A couple of years ago, when Lambert would talk about professional pundits and official Democratic spokescritters behaving as if they were trying to stoke civil war in the US, I thought he’d been spending too much time on Twitter and might benefit from a dose of smelling salts. It now looks like he was correct, albeit so early it was still possible that the impulse could have fizzled out or moved in another direction.

One of the reasons it’s hard to talk about this obvious yet diffuse and multifaceted development of actively fomenting class hatred is that it doesn’t fall tidily along demographic lines, as much as some factions would like to have you believe otherwise. It’s psychographic.

Hatred of The Other was supposed to a hallmark of the uneducated, provincial, and intolerant. Yet we now see bloody, vicious fantasies about what should happen to Them for being wrong-thinking and wrong-acting being not just voiced freely, but even applauded.

The immediate manifestation is open hatred for the unvaxxed. The Othering of them takes the form of depicting them as white Trump voting Bubbas, when vaccination rates happen to be relatively low also among blacks, Hispanics, and curiously, PhDs. In a belated admission that the media stereotyping of the unvaxxed is too narrow, minority vaccine-shunners are being rebranded as “vaccine deliberate.”1

One of the new big ways to despise The Bad (Presumed White) unvaxxed is to depict them as unworthy of receiving medical care for Covid because it’s supposedly their fault that they are in this fix. Yet no one bats an eye at treating smokers for cancer and COPD, or STD victims who presumably couldn’t be bothered to use a condom, or the overweight for heart attacks and diabetes or drunks who smash themselves up with their cars, or attempted suicides. If we’re going to go strong form “only the deserving get treated,” we could probably shrink the size of the medical industry by two-thirds.

And this sentiment is getting a following. Our IM Doc practices in one of the bluest counties in the US. A recent report:

During lunch in the doctor’s lounge word came that an unvaccinated patient had died at the tertiary center he was sent last night. 3 MDs sat at the table next to me and out loud something like this – “WELL THAT DUMB ASS HAD IT COMING”. I sat for a moment and no one else said a word. I could not believe it. I finally had to say something – “My Chairman [a superstar of academic medicine and renown medical ethicist] would have fired my ass on the spot for even thinking something like that about an AIDS patient. That is completely unprofessional and inappropriate to say that out loud.” THAT IS YOUR OPINION, THESE DUMB BUTTS HAVE IT COMING – was the reply.

They are getting meaner and more brazen by the day – as the whole vaccine narrative continues to become unhinged more every day.

I am feeling that I am getting the idea what it was like to watch normal happy German citizens turn into the SS.

Admittedly I wasn’t there, but particularly coming from a clutch of doctors, this line of talk sounds a bit too much like Lebensunwertes Leben for my comfort.

The other justification for punishing the yahoos is that they pose a contagion threat. The problem is that’s now hard to support with the fact that the vaccines were never approved based on preventing infection, but severe cases. We pointed early to data out of Israel, which has since been confirmed, showing that case levels were proportional among the vaccinated and unvaccinated as of July. That’s 5-6 months after most got a Pfizer jab, and appears to be a combo of diminishing protection over time plus Delta somewhat evading the vaccines. Other studies have confirmed diminishing vaccine efficacy.

And it’s not as if all that many of the vaccinated can claim much of a moral high ground now that it’s become popular to abandon masks and social distancing (which would have to be way more distant given Delta’s much greater infectiousness) and go to restaurants and events.

It may seem over the top to depict vengeful vaccine enforcers as proto Nazis. Yet one reader who was a leader in his state’s Asian American Alliance reports that the Chinese who remember the Cultural Revolution are abandoning the Democrats “in droves” due to tech censorship, cultural purity in the form of wokeness and now stoking of hatred over Covid that are all too reminiscent of what they fled.

But at the same time, the fury of self-designated members of the elite towards people they don’t know or know only as stereotypes comes off as a parent or authority who is enraged that they are being defied. It’s not as if many or any are angry that hospital workers are being driven to the breaking point, for instance, It’s because their sense of how things should work is being defiled.

And that goes back to 2016. A big chunk of the folks who think they are in charge by virtue being deserving had their collective Great Chain of Being upended when Trump won. Trump then compounded his sin by having a revolving collection of incompetents and loud-mouths in his Administration. What was remarkable is that rather than coolly plotting their comeback, the out group spent four years whining at the loudest warble imaginable and focusing tremendous energy on the supposed Trump show-stopper, Russiagate, that delivered a big fat squib.

Mind you, as we and others have pointed out repeatedly, Biden has continued nearly all of Trump’s policies, intensified China-poking, and executed the Trump plan to leave Afghanistan. He also embraced the Trump Covid program of placing all his bets on the magic vaccines that Trump funded and even eventually trashed masking by including getting rid of them as a major feature of his May “Mission Accomplished.”

So why the visceral hatred? It goes back to a phenomenon that Thomas Frank so skillfully described in his book Listen, Liberal. He wrote up a conference. A regular, grating feature was that everyone who was mentioned was praised in the most fawning, over the top terms…and no one reacted as if that was odd. In fact, it was treated as normal and expected.

Now who needs or wants to be praised to the skies as a matter of course? Narcissists and other deeply insecure individuals. And some of that insecurity is genuinely founded. In a highly unequal, stratified society, the loss of income doesn’t just mean giving up on this year’s ski trip or a house renovation. Among other things, it often results in the loss of your social circle, since you can no longer afford the country club membership, heading a committee at your charity, serving on the board of your kid’s private school. Social relations are shallow and very much class dependent.

There are people at the top of the American food chain who are stupid rich, for whom questions of making ends meet and financial security are laughably distant. People like that, they are easy to deal with. If it was “us” (whoever the fuck we are) versus only them, politics would be easy. We’d have taxed the billionaires to pay their fair share a long time ago.

But most of the people towards the top of the American food chain are not stupid rich, but stupidly rich. They “make” sums of money that by any fair reckoning, obviously in a global context but even in an American context, are huge. But they plow that affluence into bidding wars on incredibly (if artificially) scarce social goods. Nobody “needs” to live in Arlington (or my own San Francisco). No one’s kid “has” to go to private school (or for the more woke among us, notionally public schools rendered exclusive by the cost of nearby housing). If you make price your first priority in, say, shopping for preschool or daycare, perhaps you can find something reasonable….

The point of this is not that you should have sympathy for the Arlingtonians (or San Franciscans). Fuck ’em (er, us). But you are missing something important, as a matter of politics if nothing else, if you don’t get that the people who are your predators financially are, in their turn, someone else’s prey. Part of why the legalized corruption that is the vast bulk of the (dollar-weighted) US economy is so immovable is that the people whose lobbyists have cornered markets to ensure they stay overpaid are desperately frightened of not being overpaid, because if they were not overpaid they would become unable to make all the absurd overpayments that are now required to live what people of my generation (and race, and class) understood to be an ordinary life. It’s turtles all the way down, each one collecting a toll and wondering how it’s gonna pay the next diapsid.

I strongly urge you to read the entire post, particularly the discussion of the position of doctors.

So even if the rise of the Trumpistas didn’t break all that many PMC ricebowls (and actually gave a big shot in the arm to the news biz), it was a huge raspberry to playing the meritocratic game. And it was also a blunt reminder that their belief in the inevitability of their rule was not at all a given.

Now what I don’t understand is what these hatemongers think the end game is. To be crass, even though the Jews in Germany were very well educated and on the whole providing highly valued services, they were still only 1% of the population. Even if one believes that Bubba-hatred is limited only to the Trump loyalists, or the only 1/3 of Trump loyalists that say they won’t get vaccinated, that’s still a big chunk of the country. And they also have a strong propensity to own guns and maybe even know how to aim.

Put it another way: When Mark Blyth said that the Hamptons are not a defensible position, you can say that of Blue America generally. Let’s use 2016 results as a proxy, since Hillary was the more pure and unabashed professional-managerial class candidate than Biden: 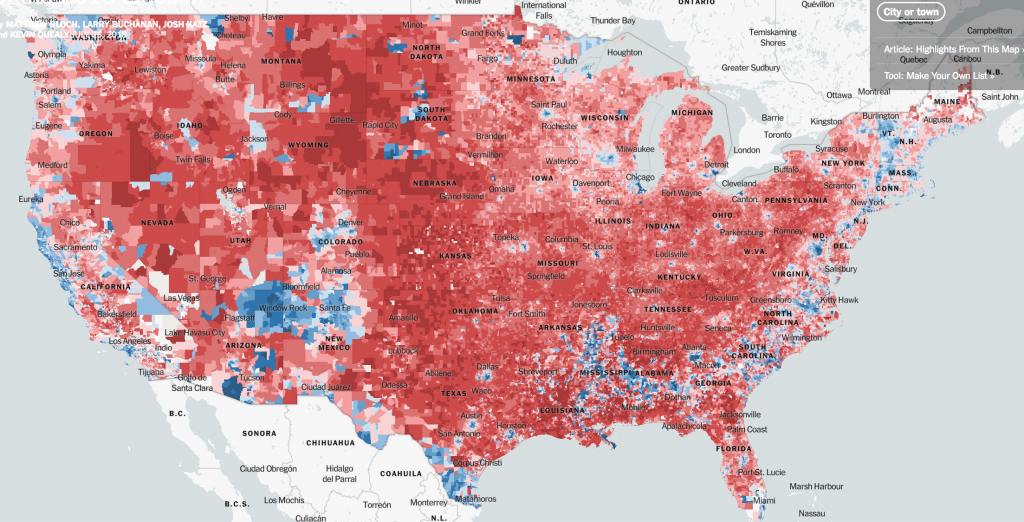 If push comes to shove, the professional-managerial class cannot rely on the support of the police. Look at how New York City’s finest openly dissed De Blasio. The military are not supposed to operate domestically and would likely use that prohibition to stand aside. The professional-managerial class does not control the ports, trucking, or rail operations. The crop-growing areas of California are under conservative control. Etc.

So the members of the professional-managerial class are correct to be insecure about their authority and claims of legitimacy. But going authoritarian when they lack adequate control of supply lines and enforcement mechanisms is an exceedingly risky wager.

1 It is remarkable that no where do I see a mention reason I’ve repeatedly heard, first hand: they have friends or co-workers who had reactions that cause them to miss a day or two of work, and they can’t afford that.