I imagine readers know what this is: 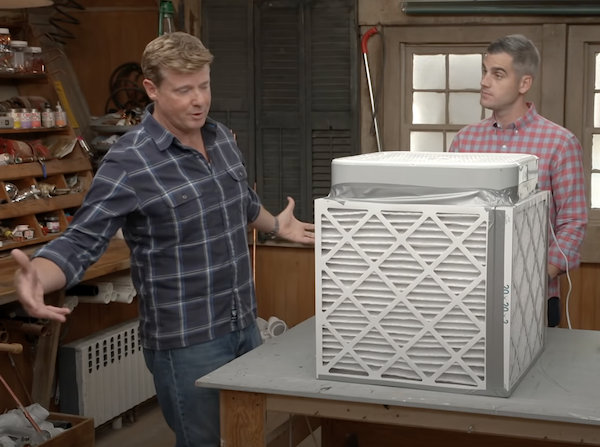 It’s a Corsi-Rosenthal (CR) box — a DIY box fan filtration system that removes particles, including Covid-bearing aerosols, from indoor air, so you and yours don’t breathe in SARS-CoV-2 virions and, if the dice fall the wrong way, end up with pink mush for lungs or brain fog. Cleaning indoor air is important!

Naked Capitalism readers have known about “Corsi Boxes” since April 2021 at the latest: 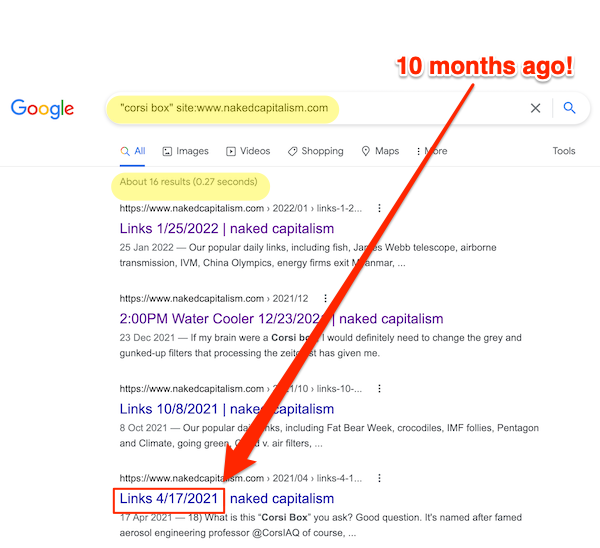 Of course, we’ve written on “Corsi-Rosenthal” boxes — more on the name change below — also: 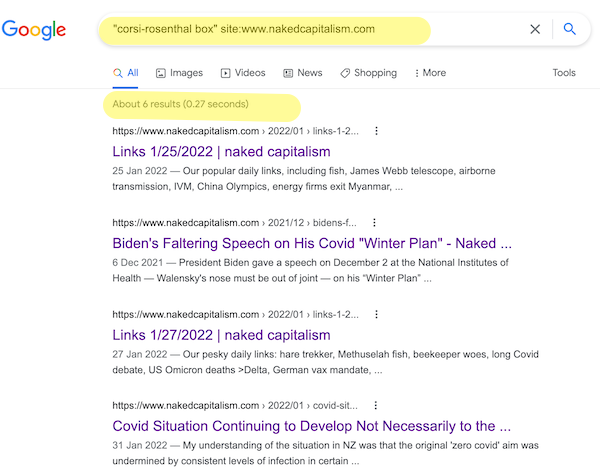 If you only read the CDC (“the national public health agency of the United States“), you wouldn’t know about Corsi-Rosenthal boxes under either name: 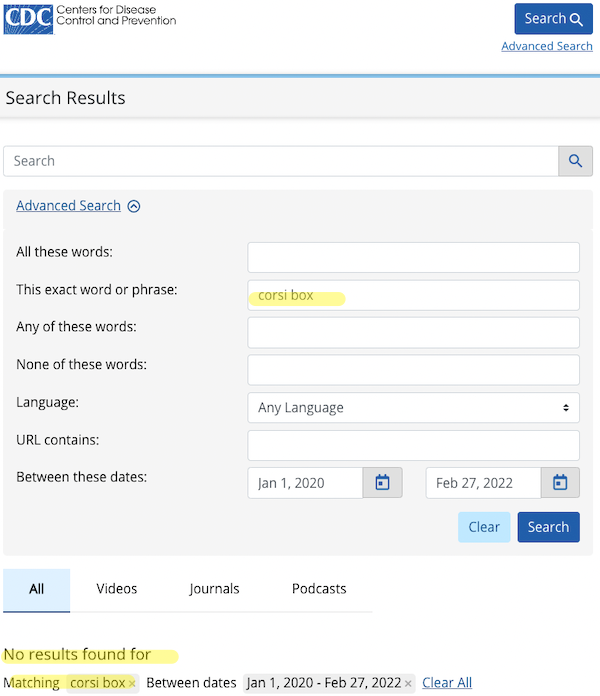 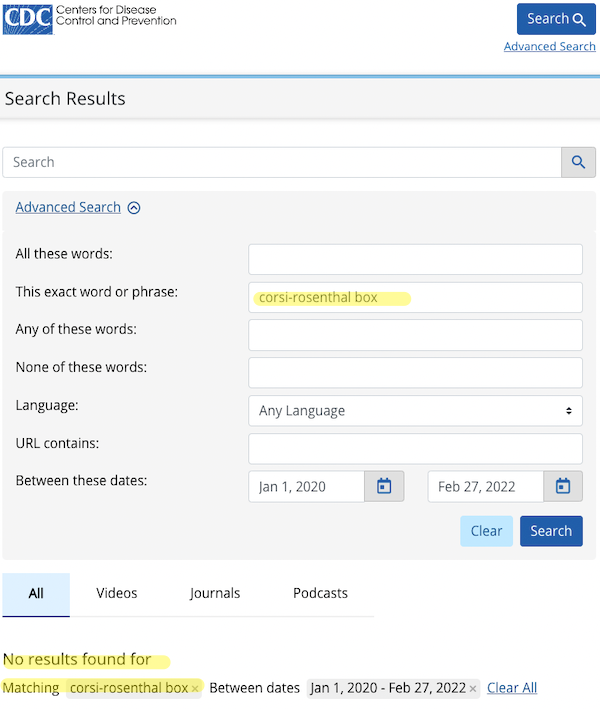 In this extremely simple, Twitter-aggregating post, I will give a little bit of the histor and cheer on the many CR box makers. I will give a number of examples of their work, allude to the difficulties of producing CR boxes internationally, and remark on mutualism. Since I assume most of you know how to make Corsi boxes, I’ll confine directions to an Appendix.

First on the history and the name change. From (sorry) Wikipedia:

In August 2020, Richard Corsi, an environmental engineer and the incoming Dean of Engineering at the University of California, Davis (UC Davis), spoke with Wired reporter Adam Roger about an idea he had for combining multiple store-bought filters with a box fan to improve the efficiency of home-made air filter designs. Rogers contacted Jim Rosenthal, the CEO of filter manufacturer Tex-Air Filters, who had collaborated with Corsi at the University of Texas and in the Texas chapter of the Asthma and Allergy Foundation of America, to run some tests on a single air filter attached to a box fan. Inspired by Corsi’s idea to use multiple filters, Rosenthal later came up with a 5-filter design. Rosenthal named it after Corsi, although after a New York Times article mentioned the boxes by that name, Corsi tweeted that Rosenthal really deserved the credit, and that he preferred the name Corsi–Rosenthal Box.

And just this week, a laudatory explainer and interview with Jim Rosenthal in the Fort-Worth Star Telegram:

Aerosol experts have increasingly called for more attention on air quality as a way to reduce the number and density of tiny particles of coronavirus floating through indoor air in schools, offices and hospitals. And among the numerous expensive, resource-heavy interventions, an increasingly popular option is a tool that can be built with a box fan, some tape, and a few high-quality air filters for a total cost of about $65.

The Corsi-Rosenthal box, also called the Corsi-Rosenthal cube, takes its name from Jim Rosenthal, a Fort Worth resident and CEO of Tex-Air Filters, which Rosenthal founded in Fort Worth in 1997.As this stage in the pandemic, Rosenthal identifies his main role in the development of the Corsi-Rosenthal box as a cheerleader. He gives feedback on Twitter to people making their own boxes at home, answering questions and encouraging those who are making the boxes. And he’s been following the research happening at universities through the country, including at the school of nursing at the University of Connecticut and at the University of California, Davis. As experts have studied interventions like the Corsi-Rosenthal box and other high-quality air filters, consensus has grown that reducing the amount of virus that can spread via the air is essential in limiting new infections.

“We really should have the National Guard making these by the truckload,” said Jose-Luis Jimenez, an atmospheric chemist at the University of Colorado.

Jimenez explained that when a person breathes, speaks and shouts, they emit small amounts of spit. Some are larger, and are known as droplets, which come out of someone’s month before quickly falling. The smaller amounts, largely invisible to the human eye, can float in the air, lingering in enclosed spaces for minutes and sometimes hours.

A good way to think about aerosols, Jimenez said, is to think about how the scent of cigarette smoke will linger in an enclosed space long after someone has put out their cigarette.

The same thing can happen with aerosols containing the coronavirus, which is why maintaining a distance of six feet alone is not enough to provide protection in enclosed, crowded spaces with poor ventilation, like schools and office buildings.

Rosenthal and Corsi’s intervention relies on the air filtration provided by MERV 13 filters, which researchers have repeatedly found is capable of trapping small particles that contain the coronavirus or other viruses.

Next, sadly there is no map aggregating all the Corsi-Rosenthal Box (CR Box) projects across the country. Here at least is one article on CR Boxes from in schools from the School Library Journal (it would be the librarians):

Corsi-Rosenthal Boxes are effective, inexpensive, safe, and, by all accounts, easy to build. The DIY air cleaners were created by Richard Corsi, dean of engineering at the University of California (UC) Davis and Jim Rosenthal, CEO, Tex-Air Filters. The open-source design requires one box fan, four MERV 13 filters, and duct tape. Cardboard can help improve efficiency by acting as a fan shroud.

A study showed the boxes effectively reduce aerosols in indoor spaces. The aerosol transmission of the SARS-CoV-2, the virus that causes COVID-19, plus the increased transmissibility of the Omicron variant has put a spotlight on the need for proper ventilation and cleaning the air indoors as a key element to cutting down infections.

Across the country, concern about children getting COVID launched building projects and volunteer efforts that put them in classrooms from colleges to K–12.

At Brown University and UC San Diego, students built boxes for their classrooms and labs. Brown is also conducting a study on the effectiveness of the units.

DC Public Schools librarian K.C. Boyd has three boxes donated by Peter Krupa, a parent in the district who started a GoFundMe campaign to raise money for the supplies. In less than a month, he was funded to build and deliver approximately 50 boxes.

A project by Arizona State University (ASU) placed 37 units as of mid-January with another 86 scheduled to be built….

Epiphany on ride home this morning: For the cost of each of these 🌲, we could build another CR box and provide cleaner air for a classroom for an entire school year..

Bet you there more xmass trees on the sidewalk today than classrooms in my district. pic.twitter.com/Z0SKOKeF7e

Why in the name of all that is holy isn’t Gus seen as a photo op? Why isn’t Jill Biden on Good Morning America helping some cute kids put together a CR Box with masking tape? A question that answers itself, once asked.

Seems like others are taking steps to make the photo op happen:

We donated a #corsirosenthalbox to a campaign office of a candidate we are supporting – we added a QR code that people can scan sending them to the clean air crew website so that folks can make their own. @CorsIAQ @JimRosenthal4 pic.twitter.com/KFwFln8fIy

Snappy red outfit! Here’s a Scout project not just on making the boxes, but documenting how to make them:

Excellent work. We have a hero fac member in the physics dept who made these for all our unventilated classrooms

I love love love that your husband is making his classroom safer!!!❤️❤️

I made 7 Corsi-Rosenthal air filters for my child’s dance school. The not-for-profit school covered the cost ($130 each). Much cheaper than buying retail units. So happy the kids will be safer. They still wear masks while dancing – hardcore! @DavidElfstrom #corsirosenthalbox pic.twitter.com/YImUOJcTnu

Our first-year engineering students built ~100 Corsi-Rosenthal boxes for the local school district. This service-learning project taught them about design, testing, and manufacturing, and they were super excited that something they built would be in use in the real world! https://t.co/JiMYpsdMYO

Party in the Grange Hall:

Just a random event found on the internet.

A casual mention of "Assembly of more Corsi-Rosenthal air-filtering boxes".

So pleased to see this beautiful Corsi-Rosenthal box in the waiting room of the urgent care clinic at the Queen E today!!! 😍 pic.twitter.com/InXiRWMQOj

From an allergy sufferer:

Putting a C/R box in my apartment made the biggest difference on my allergies of anything I've ever done to try to alleviate it.

Also, dust in that room is now not a thing. Seriously, as someone that did network engineering for years these should be in every server room

Sidebar: This is the allergy sufferer’s cat:

Putting a C/R box in my apartment made the biggest difference on my allergies of anything I've ever done to try to alleviate it.

Also, dust in that room is now not a thing. Seriously, as someone that did network engineering for years these should be in every server room

Internationally, CR boxes may be harder to make. Box fans aren’t always available, the closer to the equator you get the less likely it is there will be furnace filters, and cheap Chinese HEPA filters compete.

Here in the Phillipines, a fan that is not a box fan. But note the qualification on the filter:

Step #1
Lay over the air cleaning filter sheets to the HEPA filter (as it claimed to be). pic.twitter.com/qiQWaawHF3

Has anyone in Australia managed to build a Corsi-Rosenthal box? I hear rumours that they may be hard to make here due to the components being hard to find/expensive.
If you’ve managed to do it, please let me know how you did it, I need to know *everything*#CorsiRosenthalBox

My version of a Corsi-Rosenthal Box just in case we ever need to filter some airborne virus during self-isolation. Parts are not easy to get in NZ. Total cost $180 NZD. And piece of advice – check to see if your fan has an auto tip over shut off before you start building! pic.twitter.com/t213n62yiI

Here endeth the litany on CR Boxes and fun. I find the CR box movement — if I may call it that — hopeful. The movement is marked and informed by what I’ve started to call mutualism (in opposition to the hegemonic libertarianism; “solidarityism” was not euphonious. Readers, if you have a better term, please suggest in comments). Corsi insisting that “Corsi-Rosenthal” was the proper name for the box is a fine example of mutual care. (Indeed, the aerosol thought collective generally is marked by the sort of give and take that I had previously only encountered with the scholars who developed MMT.) Many if not most of the CR boxes not made for families are given away. Many are constructed in group settings: Classrooms, dance schools, engineering schools, the grange. Makers share information on how best to build and place the boxes. CR Box makers aren’t whinging about “freedom.” They’re going out and delivering it, both for themselves and — breathing being a social relation — for society. Perhaps, as a country, we have more social capital than we thought.

Readers, have you spotted CR boxes in the wild? Have you made one yourself?

The Clean Air Crew site has a lot of good data on CR Boxes. From that site, here is a Twitter thread to guide construction:

Here’s a quick illustrated guide for the #corsirosenthalbox I made. I love all the different versions people are making with amazing ingenuity. Such a great reminder to not let perfect be the enemy of good (cc @JimRosenthal4 @CorsIAQ @kprather88 @caruzycki) pic.twitter.com/E7Wo6XU6rC