Lambert: If you’re exposed to Russian energy, more volatility for you.

What are the potential costs of cutting Russian energy imports as a further tightening of the sanction regime? One of the many uncertainties regarding the size of these costs is related to the diffusion and amplification of the shock in production networks. This column discusses what can be learned on this topic from the analysis of firm-level data. Micro-level evidence suggests that some firms adjust, mitigating the effects of the shock. However, exposure to these shocks is heterogenous across firms. This has distributional consequences, with less exposed firms gaining market shares over more exposed ones.

Imports from Russia are largely made up of energy inputs, most notably oil, coal, and natural gas. The centrality of these inputs in production networks implies that shocks affecting the price of energy have the potential to propagate downstream, leading to sizeable amplification of the shock. However, recent estimates, recovered from calibrated multi-sector, multi-country models with input-output linkages (Bachmann et al. 2022, Baqaee et al. 2022), suggest that the effect of an import ban on Russian oil and gas would generate a relatively limited GDP contraction.1 Even in a country like Germany, cutting Russian energy imports – which represent 30% of German energy consumption – would induce a 0.5-3% decline in GDP, a sizeable but manageable economic cost.

In sector-level models such as those used in Bachmann et al. (2022) or Baqaee et al. (2022), such a relatively small effect results from a non-zero elasticity of substitution among firms’ inputs. If Russian oil and gas were perfect complements to other inputs (a zero elasticity), GDP would fall one-to-one with energy imports. Some of the firms in sectors dependent on Russian energy are assumed to be able to switch to other suppliers and the same is true of firms in downstream sectors, which need to cope with the reduced production of their suppliers. In particular, the open-economy structure of the model implies that some of the inputs that can no longer be produced domestically due to energy rationing can be substituted by foreign goods.2

The assumption that there exist some substitution opportunities in production networks may seem controversial, as they are typically thought to be rigid structures shaped by relationship-specific investments. Is it more appropriate to instead be conservative and assume a pure Leontief production structure? Addressing this question is tricky in the absence of direct evidence on how technologies adjust to energy shocks.

Is Technology Leontief at the Firm Level?

In a recent paper (Lafrogne-Joussier et al. 2022), we tackle a related question using the early stage of the Covid crisis as a quasi-natural experiment. In this empirical study, we use monthly panel data on French firms and investigate the dynamics of their sales in the first semester of 2020. Our strategy exploits firms’ early exposure to supply chain disruptions induced by the lockdown in China in January 2020. By comparing firms that were exposed to the productivity slowdown in China through their value chain with comparable firms that were not, we can quantify the extent of the propagation of shocks, at the root of the amplification formalised in models of production networks. By March 2020, when the virus was just beginning to spread in Europe and France, firms exposed to supply chain disruptions from China were already reporting 7% lower export sales than their unexposed counterparts.

The exercise also makes it possible to examine heterogeneous adjustments of exposed firms to input disruptions. A first finding is that exposed firms holding inventories managed to absorb the shock better. Whether managed at the firm level, as in our example, or by public authorities, strategic inventories (in particular of gas and oil) appear to be essential to help exposed firms mitigate the shock. A second, more surprising result is that firms that were most dependent on Chinese inputs absorbed some of the shock by diversifying their supply chain following the early lockdown. Among the treatment group, firms that had a non-diversified supply chain have a significantly higher probability to start importing their inputs from elsewhere just after the disruption induced by the Chinese lockdown, in February and March 2020 (Figure 1). Whereas such evidence does not directly address the question of the possibilities of substitution away from Russian gas, it does support the view that, even in the very short run, firms that face important disruptions in their input purchases do adjust.

Figure 1 Impact of the early lockdown in China on exposed firms’ number of foreign partners. 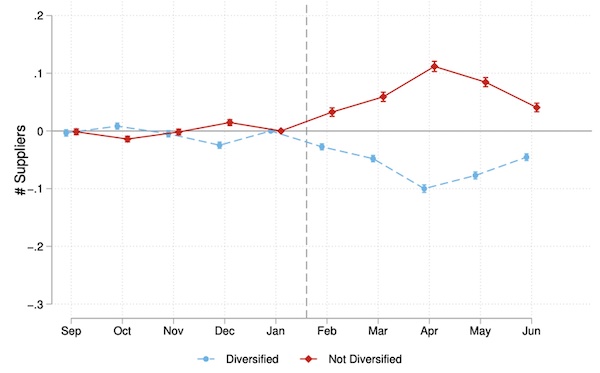 Source: Lafrogne et al. (2022).
Notes: The figure shows the result of an event study design that compares firms exposed to Chinese inputs prior to the lockdown in China (“treated” firms) and firms that were not (“control” firms). The treatment group is further split into “diversified” firms that were connected with at least one other sourcing country for the input sourced in China and “non-diversified” firms that solely relied on China prior to the shock. The estimated equation explains the number of source countries, before and after January 2020, in the group of treated firms in comparison with control firms, using a Poisson estimator. The difference is normalised to zero in January 2020.

DistriButional Effects of the Shock

Another margin of adjustment, which textbook sector-level models do not directly incorporate, is substitution within a sector across firms. Since firms in the same sector produce output that is probably more highly substitutable than inputs within the firm, heterogeneity in who uses Russian gas provides another shock attenuation mechanism (di Giovanni et al. 2020). As discussed in this paper, heterogeneity in exposure to a foreign shock has significant aggregate consequences on the overall impact of the shock. The heterogeneity in exposure to Russia from the import side is illustrated in Figure 2. Out of 150,000 French importers, less than 2,500 directly imported from Russia in 2019. However, these firms are substantially larger than the average and their total imports account for one-third of France’s overall imports. Providing exposed firms are large and connected to other domestic producers, their sensitivity to the shock has aggregate consequences. But the heterogeneity also has distributional consequences: non-exposed firms gain market shares over exposed firms. To account for these substitution opportunities, the analysis in di Giovanni et al. (2020) maps firm-level data for France with the sector-level input-output data used in Bachmann et al. (2022) or Baqaee et al. (2022).

Source: French customs data for 2019.
Notes: The figure shows the number (left panel) and share in aggregate imports (right panel) of firms that i) import from Russia (dark grey bar), ii) import one of their inputs solely from Russia (light grey bars) and iii) import one of their main inputs solely from Russia (blue bars). In the third case, statistics are based on the sub-sample of a firm’s imports that account for at least 1% of the firm’s overall imports in 2019.

Figure 3 illustrates how heterogeneity in exposure and substitution opportunities affects the response of French firms to a 10% drop in Russian productivity. Under our baseline calibration, the aggregate impact of such shock is a 0.9% decrease in France’s real GDP (the red line in Figure 3). Blue circles display the average firm-level responses depending on the firm’s size. Whereas firms in the top two percentiles of the size distribution experience a sizeable 4% adjustment, some firms in lower percentiles expand as they gain market share over the most exposed firms. These substitution opportunities are not accounted for in textbook models with input-output linkages but they could be important in the context of a possible ban on Russian gas if there is heterogeneity across firms within a sector in their dependence on Russian gas.3 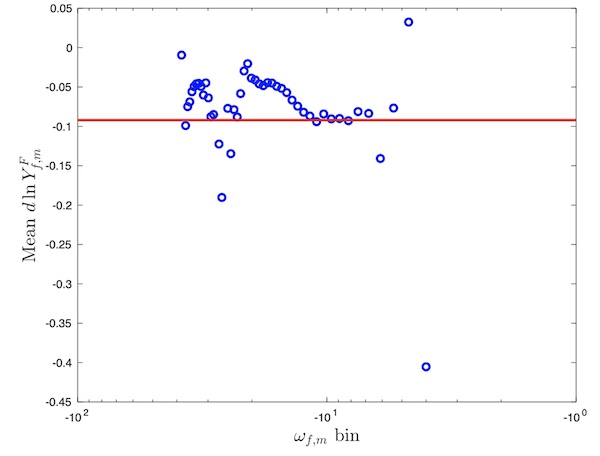 Source: Authors’ calculation using the model in di Giovanni et al. (2020).
Notes: The figure shows the mean elasticity of firms’ real value added to a simulated 10% drop in the aggregate productivity of the Russian economy. Average elasticities are computed for 50 bins of individual firms, grouped by their (value added) size.

Existing evidence recovered from detailed firm-level data thus supports the view that foreign shocks do diffuse in production networks. Despite the rigidity of modern production networks, some firms adjust their technology, even in the very short run, when confronted with a disruption in their value chain. Moreover, the heterogeneous exposure to the shock has distributional consequences: less exposed firms gain market shares over the more exposed ones. Assuming some substitution across inputs in models of production networks is consistent with this micro-level evidence. But what the discussion also shows is that a ban on Russian imports will have very heterogeneous consequences. Some well-known firms and some iconic products will be strongly affected by the sanctions. Beyond GDP figures, huge but concentrated losses may have a stronger impact on public opinion than small diffused losses.