Yves here. This VoxEU post does a very solid job of trying to estimate the importance of Russian output to various commodity markets, and importantly Russia’s role in supply chains. However, even this piece misses some issues due to the impact of the conflict on Ukraine, and that Ukraine’s output profile has parallels to that of Russia.

Rev Kev pointed out recently that Russia has stooped to a bona-fide sanction (as opposed to its more passive-aggressive variants) with neon after the US and EU barred the export of semiconductors to Russia. As you can see from the video below, Ukraine had accounted for about 50% of the global output of neon via two plants, one in Mariupol and one in Odessa. That’s now off the market. Russia had 30% of the market, which is now 60% of what is left. And neon is essential for the lasers used to etch semiconductors. (Readers: does a laser keep using the same neon over its life, or does it need new neon periodically/often? That will make a big difference in terms of how quickly this restriction bites).

The speaker is sweeping in his claims about who shelled what in Mariupol. It’s clear that Ukraine was responsible directly and indirectly for attacks in residential areas; I’m not clear why Russia would have wanted to attack the neon facility but it might have been collateral damage when Azov retreated to the industrial part of town.

The Russian invasion of Ukraine and the subsequent sanctions imposed on Russia are adding strains to already disrupted global supply chains. This column introduces a new indicator to show that the war is already rattling global supply chains. It also argues that despite the modest share of Russia and Ukraine in global trade, the ramifications for global activity can be sizeable as both countries are among the top global exporters of energy products and raw materials that enter upstream in the production processes of several manufactured goods and that may be hard to substitute in the short term.

Supply bottlenecks have worsened since the onset of the war, especially in sectors largely dependent on Russia’s and Ukraine’s exports. We construct a new index of global sectoral supply chain pressures (GSSP) which disentangles the contributions of seven industries to aggregate supply pressures in the manufacturing sector. This indicator is derived from a vector auto-regression (VAR) with global purchasing managers’ index (PMI) variables such as: output, output prices, and the suppliers’ delivery times of seven manufacturing sectors. A global supply shock is identified through sign restrictions and the indicator is obtained bottom-up by aggregating the fluctuations in sectoral PMI suppliers’ delivery times (SDT) that are explained by the global supply shock.1 The GSSP indicator suggests that supply pressures intensified again since March (Figure 1), with the natural resources and chemical industries sectors being the main contributors. This pattern of sectoral disruptions likely reflects the impact of the war in Ukraine, as both Russia and Ukraine are important exporters of metals and mining products, as well as products used in the production of fertilizers (i.e. the chemicals sector).2 Such supply disruptions, not yet fully captured by available economic data, are likely to intensify in the next few months, especially in Europe. 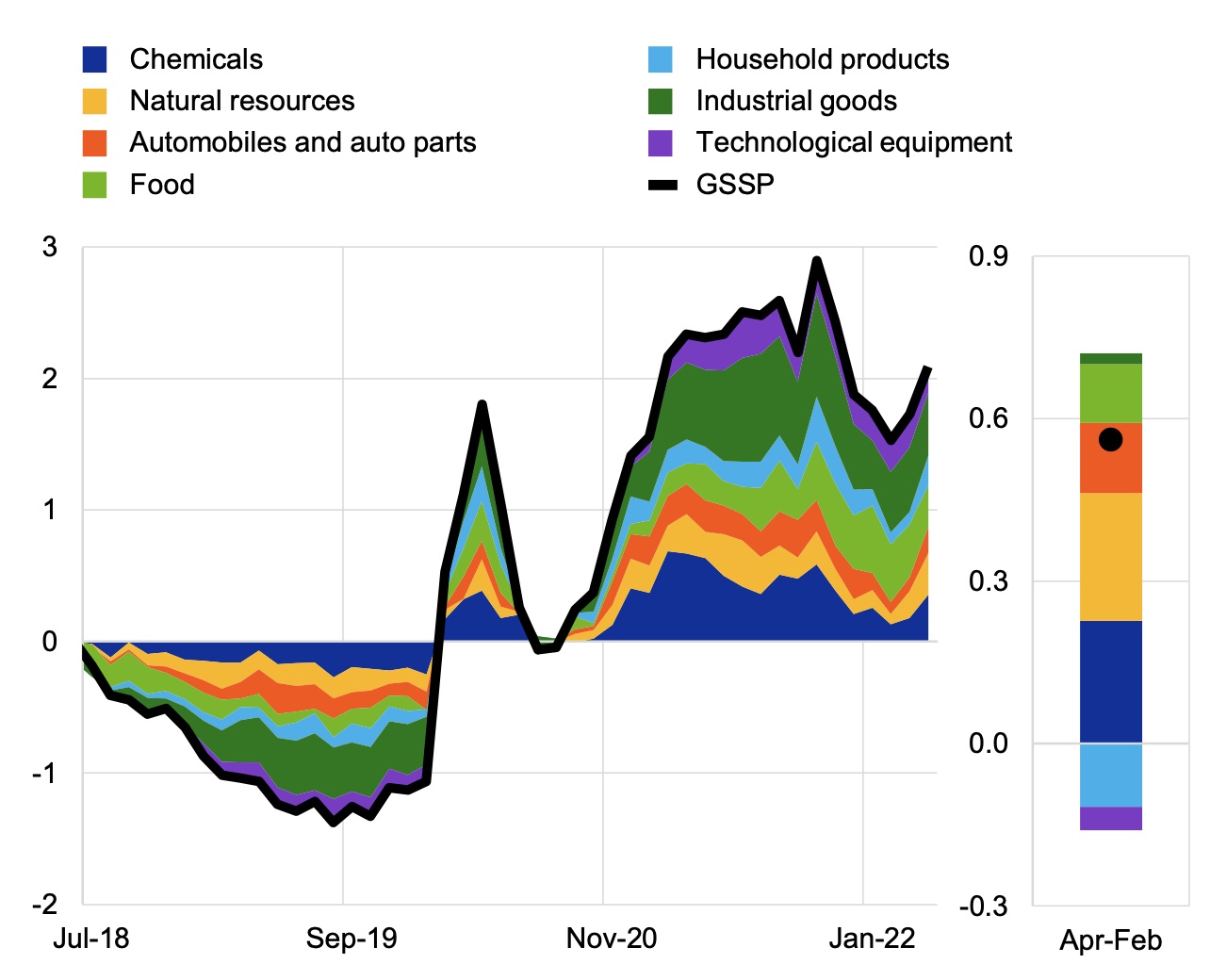 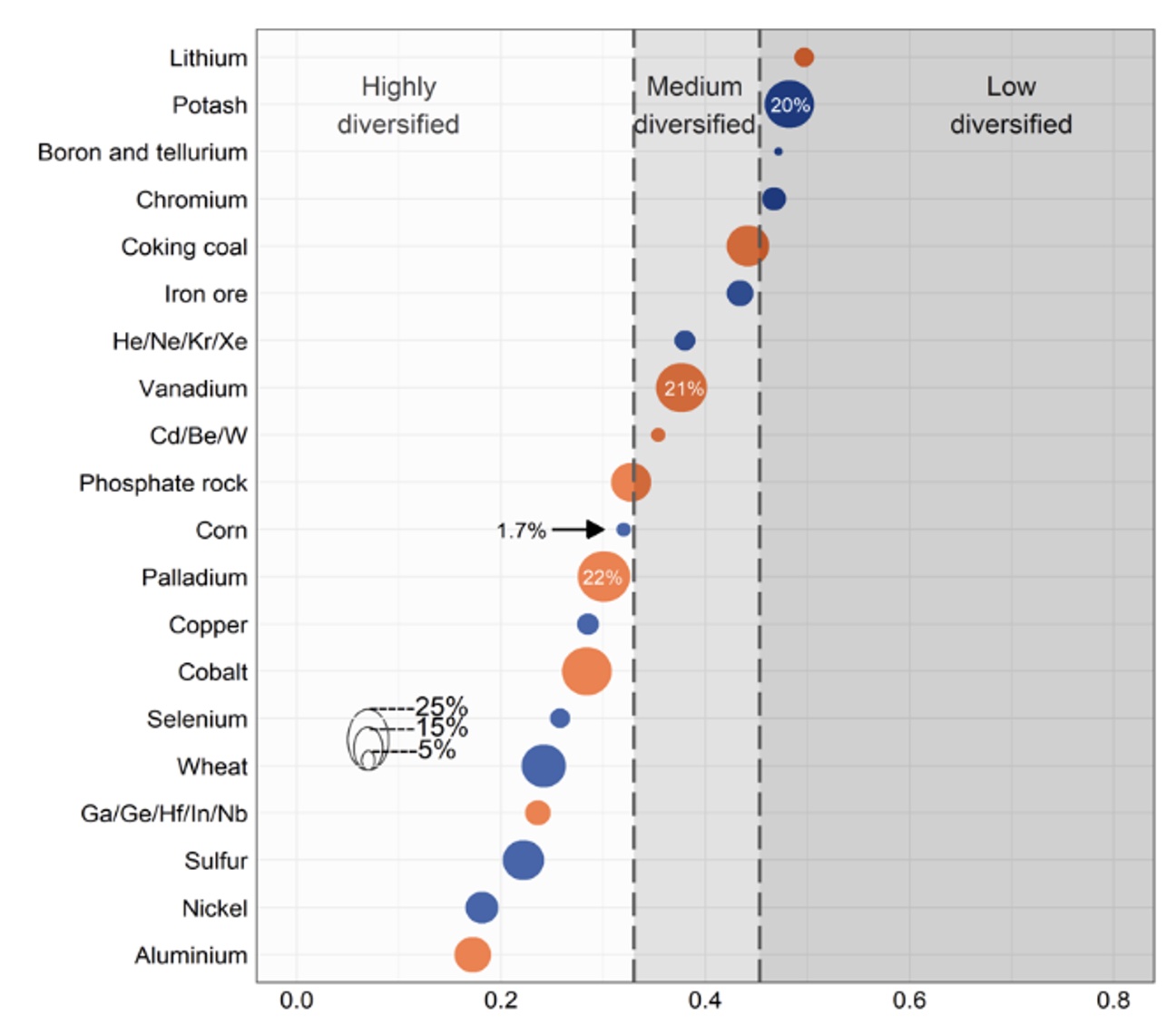 Looking at Russia’s trade specialisation is useful to assess the potential implications of war-related disruptions for global supply chains and their geographical dimension. Russia’s exports of oil, gas, and coal account for 15% of the world’s exports of these commodities and the EU is its largest importer and the region with the highest import dependence from Russia. This explains the supply pressures emerging in the natural resources sector. In addition to energy commodities, Russia is also a key exporter of raw materials, including those classified by the European Commission (2020) as critical given their economic importance and high supply risks (Figure 2). For example, Russia exports materials used in the production of fertilisers, especially potash, where it has a dominant position, but also of sulphur and phosphate rocks. When looking at critical raw materials, Russia is a large exporter of palladium, vanadium, and cobalt, which are most prominently used in the production of 3D printing, drones, robotics industries, batteries, and semiconductors, thus affecting also other sectors, such as electronic appliances, transportation, and most prominently the car sector. Russia is also the fourth largest producer of coking coal, used for steel production, where it also enjoys a dominant market position, while Ukraine is one of the largest exporters of iron ore, which is used in iron and steel industries.

War-related disruptions to production and trade flows from Russia may be amplified through global production networks given the country’s significant forward integration in global value chains. Russia’s share in global forward global value chains participation is around double the size of its share in gross global trade (2.8% versus 1.5%). Notably, Russia has one of the highest forward participation rates in supply chains, as more than 30% of its exports consist of inputs used by its trade partners as intermediate inputs, compared to a global average of just 18% (Figure 3). This is explained by Russia’s specialisation in energy and metal industries, which are intrinsically more forward integrated, being positioned upstream in the production process. Therefore, disruptions to Russia’s exports might well propagate downstream through supply chain networks, having an impact also via the indirect trade (Winkler and Wuester 2022, Winkler et al. 2022). Moreover, as Russian inputs are involved in several stages of production, implications of disruptions could potentially be long-lasting, in line with previous firm-level empirical evidence based on the Tohoku earthquake (Boehm et al. 2019).

Quantitative trade models which account for global value chain linkages find that the size of the welfare effects of trade disruptions due to the war is double compared to standard models. In a recent work (Borin et al. 2022) a multi-sector, multi-country general equilibrium trade model (Antràs and Chor, 2018) is exploited to gauge to what extent supply chains may amplify the effects of the collapse in trade between Russia and its trading partners. A decline in Russian imports from sanctioning countries in line with the most recent trade data is obtained through an increase in bilateral trade barriers. The results suggest that Russia and some EU countries, most notably Central and Eastern European countries and Finland, would be affected disproportionally compared to others, with the welfare effects being significantly larger when sanctions on energy are assumed, suggesting a highly pervasive role for energy inputs in production (Figure 3). Indirect cross-country and cross-sectoral linkages effects act as a significant magnifier, as they double the size of the standard (i.e. non-global value chain) effects, especially for those countries which have tighter supply chain linkages with Russia. One caveat to these findings is that the quantitative trade model features a high degree of substitutability across inputs, a feature arguably unrealistic especially in the short run for critical inputs such as energy (Bachmann et al. 2022). Under lower but plausible degree of substitutability, Borin et al. (2022) show that the magnitude of the effects on economic activity of disruptions to trade in energy products would be higher than estimated above and, in the case of a full energy embargo, they would increase markedly and may reach 4% of GDP in the euro area. 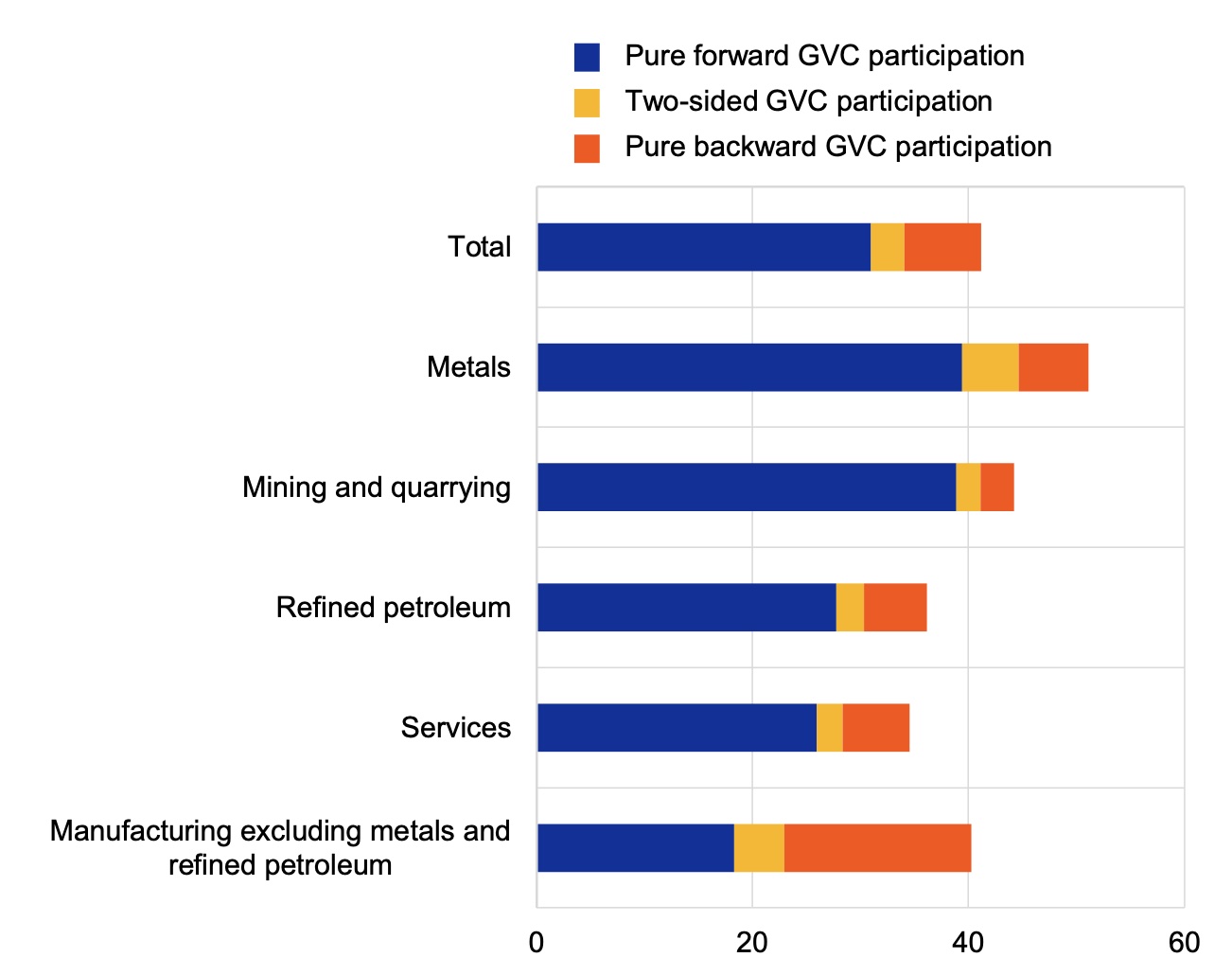 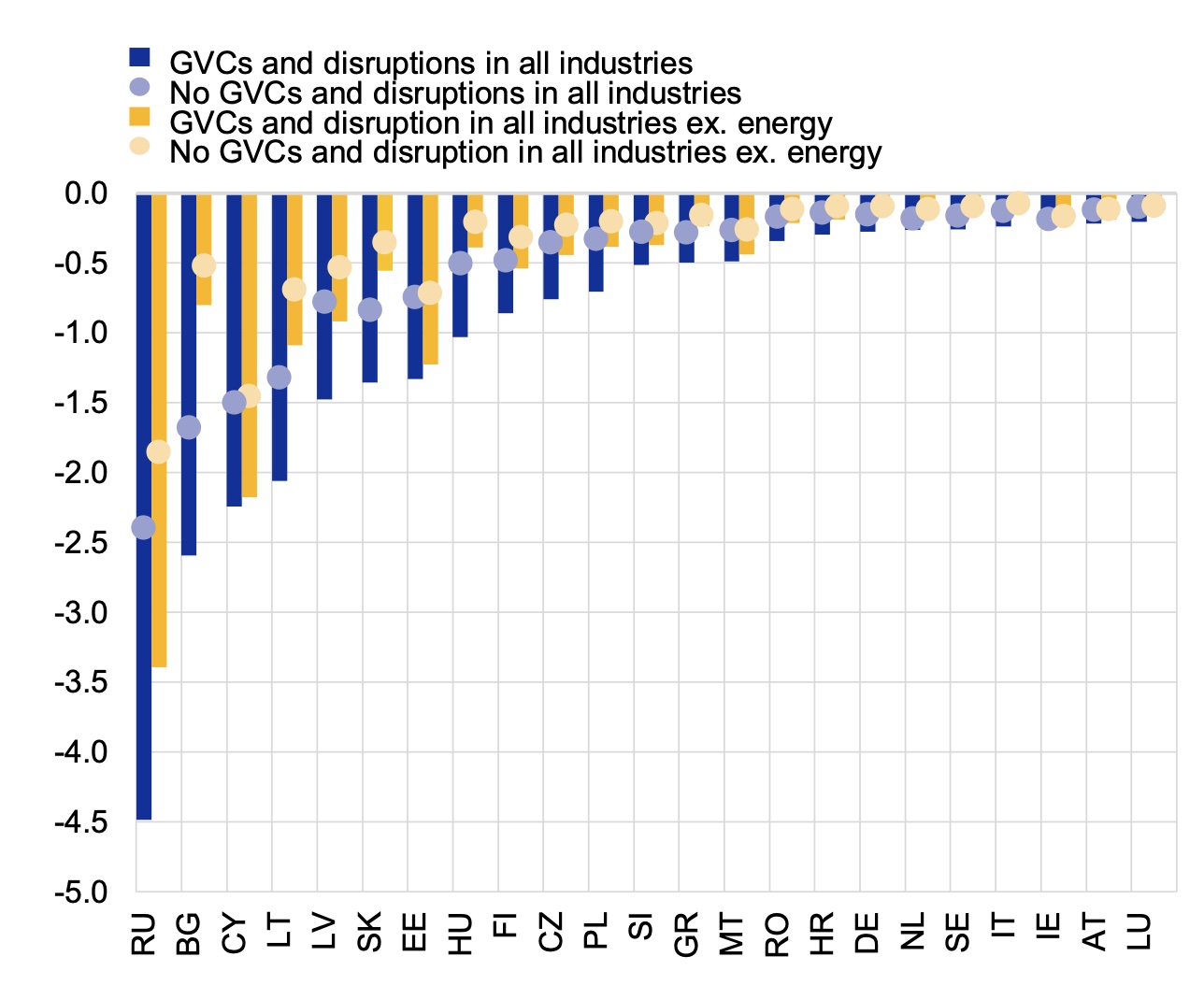 1 The indicator is obtained by aggregating the fluctuations of the sectoral PMI delivery times which are due to the global supply shock. These sectoral fluctuations are weighted by the relevance of various sectors in the global economy. The indicator compares well with the indicator GSCPI produced by the NY Fed, sharing a high degree of correlation (around 90%). The sectors considered in the indicator are Chemicals, Natural resources, Automobiles & Auto parts, Food and Beverages, Household & Personal Use Products, Industrial goods, and Technological Equipment.

2 Our indicator likely picks up also the effects of the severe lockdown measures introduced in China since mid-March in response to the spread of the Omicron variant, and which caused disruptions to economic activity and logistics.