Yves here. Gabriel Zucman came to prominence with his study on tax havens that became the book The Hidden Wealth of Nations. Zucman concluded that 8% of global wealth was held in tax havens, and 6%, meaning 75% of the 8%, was in fact shielded from the tax man.

Most people think of tax havens as being primarily the device of shady oligarchs and third world dictators but the biggest users are major corporations. Nicholas Shaxxon, in his book Treasure Islands, used a early chapter to describe how corporations shifted income out of Africa to the degree that Africa was a net capital exporter.

Zucman and his co-author Ludwig Wier focus this post on the findings of new paper on whether EU and US efforts to curb tax haven use have had much impact. They conclude not.

The world has been trying to curb profit shifting to tax havens for a decade, but consistent time series evaluating the impact of these reforms have been largely absent. This column uses a new time series of global profit shifting covering the 1975–19 period to estimate that the fraction of multinational profits (made outside of the headquarter country) shifted to tax havens increased from less than 2% in the 1970s to 37% in 2019, resulting in a tax loss of roughly €250 billion.

In June 2012, world leaders at the G20 meeting in Los Cabos attested to the need to curb the corporate practice of using tax havens. The OECD was put in charge of developing a plan that ended up consisting of 15 tangible actions that should significantly limit abusive corporate tax practices. Three years later, the G20 adopted the plan officially and implementation began across the world in 2016 (Djankov 2021).

In the immediate aftermath of this landmark agreement, leaks of questionable corporate tax practices flooded the ether (the Panama Papers, Paradise Papers and many more). These bolstered public outrage and led to further political action across the world. In the US, the Trump administration passed the Tax Cuts and Jobs Act in late 2017 that almost halved the corporate tax rate in the US and cracked down on profits located in tax havens, both actions intent on lowering the incentive to shift profits to tax havens. Meanwhile Margrethe Vestager – named “the tax lady” by Trump – started going after EU member states granting preferential tax deals to multinationals. Finally, lowering profit shifting to tax havens became an explicit part of the Sustainable Development Goals (SDGs) with SDG 16.4.1.

A body of evidence suggests that multinational companies shift profits to tax havens (e.g. Bolwijn et al. 2018, Clausing 2016, Crivelli et al. 2015, Tørsløv et al. 2022). Until now, however, we have not had a good sense of the dynamic of global profit shifting. Have corporations reduced the amounts they book in tax havens since 2015, or have they found ways to eschew the new regulations? A number of studies provide estimates of global profit shifting, but they typically do so for just one reference year. Moreover, because these studies rely on different raw sources and methodologies, their estimates are not directly comparable, making it hard to construct consistent time series by piecing different data points together.

This limits our ability to study the dynamics of profit shifting and to learn about the effects of the various policies implemented to curb it. This paper attempts to overcome this limitation by creating global profit shifting time series constructed following a common methodology. Our series allow us to characterize changes in the size of global corporate profits, the fraction of these profits booked in relatively low-tax places, and the cost of this shifting for governments of each country.

Our starting point is the estimates from Tørsløv et al. (2022), which are for 2015. Building on the same sources and applying the same methodology, we first extend these estimates to cover the years 2015 to 2019, a period that includes the base erosion and profit shifting (BEPS) process and the US tax reform of 2017. We then construct pre-2015 series back to 1975, which allows us to capture the decades of financial and trade liberalisation that saw a dramatic rise in multinational profits. Due to the lack of some of the input data required to implement the full methodology of Tørsløv et al. (2022), these pre-2015 series are based on additional assumptions and have some margin of error. However, the main quantitative patterns that emerge from these series are likely to be reliable. 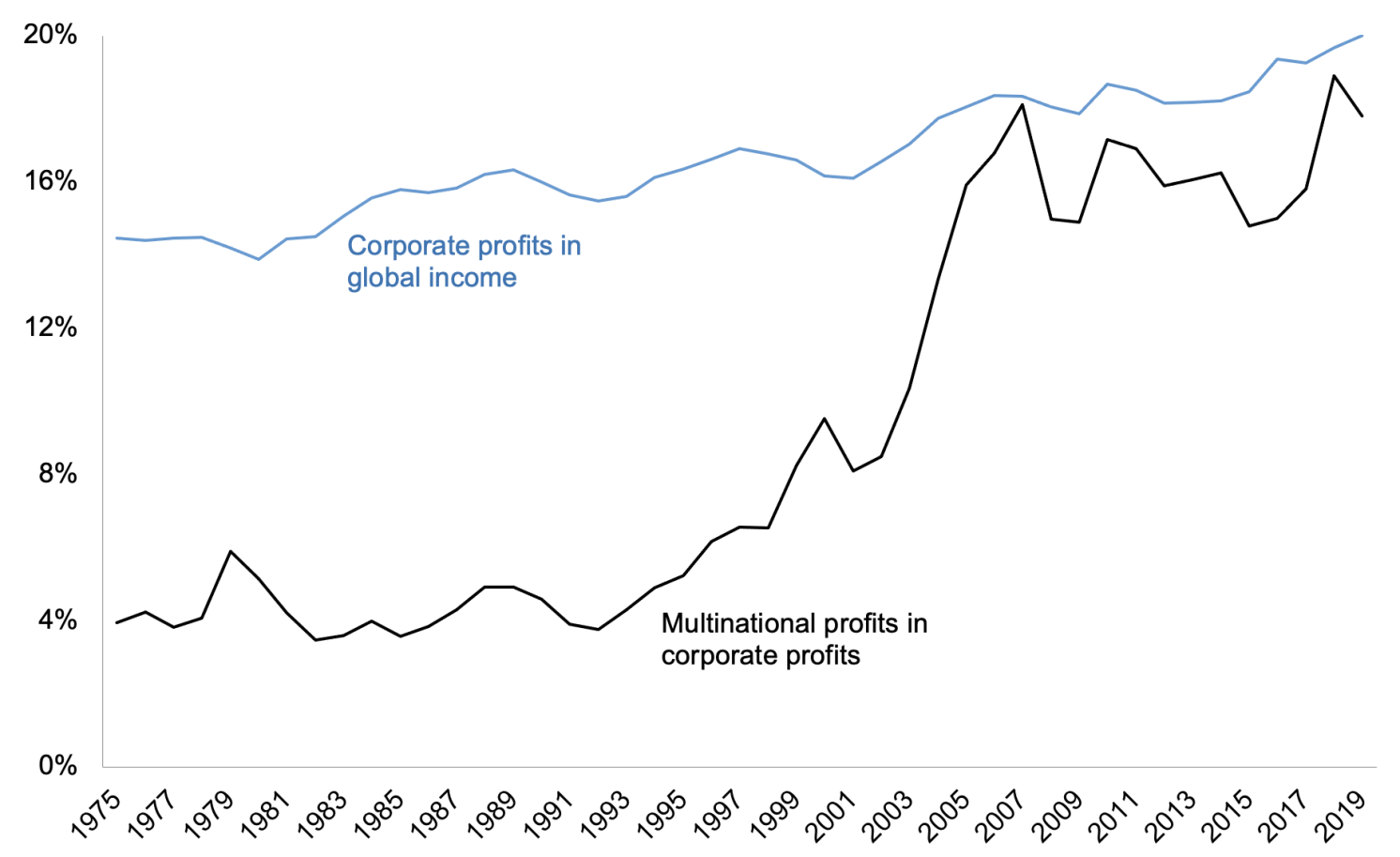 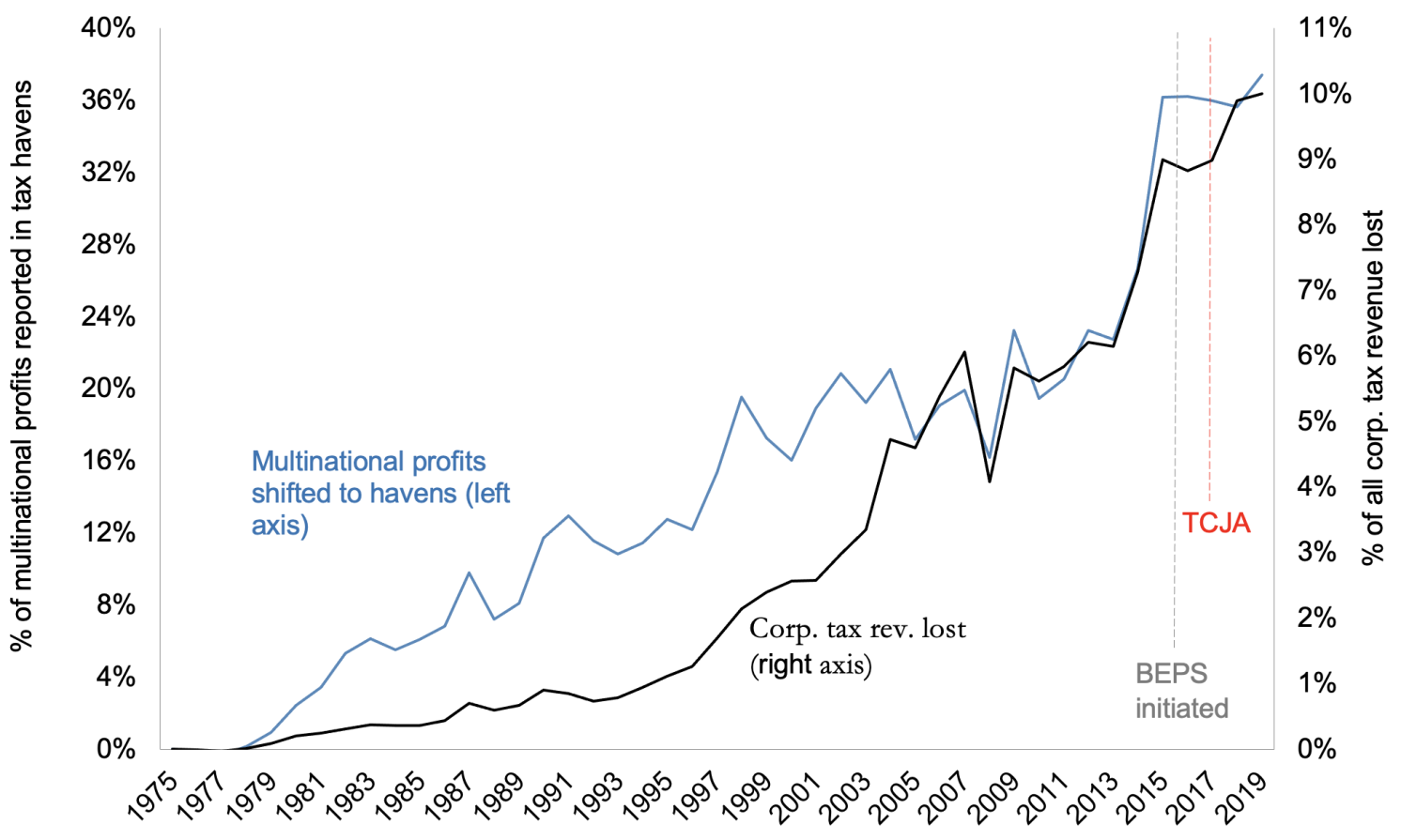 Authors’ note: The views in this column are the authors’ and not necessarily those of the Danish Ministry of Finance. All of our research is available in the public database missingprofits.world. Here you can see the individual tax losses (or gains) of each country using our interactive map. You can also find the methodology description that was recently published in the Review of Economic Studies. We will continue to update our results as new data become available.