Normally I don’t go for intra-day fever charts, and the Nikkei was down considerably on Friday before rallying and winding up in positive territory. Nevertheless, the current state of play gives cause for pause: 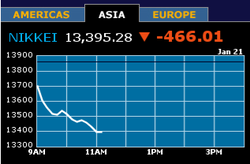 The related Bloomberg story attributes the decline to the prospect of global recession and the lack of enthusiasm for the Bush fiscal stimulus plan:

The MSCI Asia Pacific Index lost 2.2 percent to 143.52 at 11:16 a.m. in Tokyo, adding to a 7 percent decline this year. All 10 industry groups fell and all Asian benchmarks retreated.

Japan’s Nikkei 225 Stock Average dropped 3.4 percent to 13,395.28, while the broader Topix slid 3 percent. Australia’s S&P/ASX 200 Index extending its longest sell-off in a quarter of a century.

The Standard & Poor’s 500 Index completed its worst weekly decline in five years after Bush called for a plan on Jan. 18 that offers corporate investment incentives and personal tax rebates. The U.S.-based Conference Board reported on the same day that its index of leading economic indicators fell 0.2 percent in December, the third consecutive drop.

Bush didn’t offer specifics on a stimulus plan, saying he wants to reach an agreement with Congress.

Update 3:00 AM. Yen rallies also reliably put the Nikkei in a downdraft,and that is also operative today. From Bloomberg:

The yen strengthened against 13 of the 16 most-active currencies as rising concern the U.S. is headed for recession prompted investors to sell higher-yielding assets funded by loans made in Japan.

The Japanese currency gained the most versus the South African rand and approached the strongest since May 2005 against the dollar on speculation a report this week will show sales of existing homes in the U.S. fell in December, capping the biggest yearly slump in almost a generation. The yen is the best performing major currency this year as global stock markets have slumped on concern losses tied to U.S. mortgages are mounting.