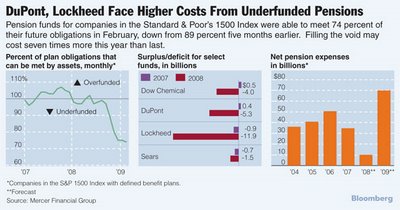 Pension funds for companies in Standard & Poor’s 1500 Index met 74% of future obligations in February, down from 89% before the market crashed, Bloomberg reports:

The amount by which U.S. pensions are underfunded has almost doubled since October to $373 billion, increasing pressure on companies to give more to retirement plans as the global recession saps earnings.

U.S. retirement plans are able to meet 74 percent of their future obligations, down from 89 percent five months ago, after global stocks fell and contributions were delayed, according to Mercer’s Financial Strategy Group, a Marsh & McLennan Cos. unit. DuPont Co., Caterpillar Inc. and Lockheed Martin Corp. are among the companies that say they expect higher pension costs in 2009 (click on chart above to enlarge).

Last year’s drop in U.S. stock prices, the deepest in seven decades, will saddle the 53 percent of companies in the Standard & Poor’s 1500 Index with defined-benefit plans with about $70 billion in pension expenses this year, a sevenfold increase from 2008, as they seek to close the funding gap, Mercer analyst Adrian Hartshorn said yesterday in an interview.

“Everybody is facing the same problem: big companies, charities, non-profits,” said Judy Schub, managing director of the Bethesda, Maryland-based Committee on Investments of Employee Benefit Assets, whose members’ plans are responsible for more than 11 million workers and retirees. “The call on their cash is going to be significantly higher, two or three times higher, than they had planned.”

DuPont’s pension expenses may rise 40 cents to 50 cents a share this year after the plan’s assets fell 28 percent to $16.2 billion, the company said in a Feb. 12 filing. The pension is underfunded by $5.3 billion, compared with a $412 million surplus a year earlier, DuPont said.

“Equities are very attractive at this point in time,” Sills said. “We’ve always had a healthy equity weighting.”

DuPont, the world’s third-largest chemical maker, plans to increase the amount of equities in its plan to 52 percent this year from 49 percent in 2008, according to its filing. About a third of its portfolio will remain in fixed income, with the remainder divided between real estate and other investments. Equities made up 55 percent of DuPont’s assets in 2007.

Wilmington, Delaware-based DuPont said in a filing it hasn’t determined how much it may contribute to its pensions this year and it isn’t required to add funding to the plan at this time.

DuPont in January reported a fourth-quarter loss of $629 million as global demand for materials used in cars and homes deteriorated. The company has cut 2,500 jobs and 8,000 contractor positions.

The negative return on plan assets in 2008 and the change in the discount rate will increase 2009 pension expenses to about $1.04 billion, more than double the $462 million in 2008, Bethesda, Maryland-based Lockheed said in its annual report filed in February. About 85 percent of the increase was driven by the drop in plan assets, Lockheed said.

Dow Chemical, the largest U.S. chemical maker, expects to more than double pension contributions to $376 million from $185 million last year, according to a Feb. 20 filing. Midland, Michigan-based Dow’s pension was underfunded by $4 billion at year-end after posting a $526 million surplus a year earlier.

Sears Holdings Corp., the largest U.S. department-store chain, may need to almost triple its pension contributions to $500 million in 2010 from $170 million this year if pension reforms aren’t enacted and the markets fail to recover, the Hoffman Estates, Illinois-based company said in a filing.

Caterpillar, the largest construction-equipment maker, said Jan. 26 that it had a $3.4 billion year-end charge because of lower returns on pension assets. The company plans to put $1 billion into the pension fund this year, Chief Executive Officer Jim Owens said on a Jan. 26 conference call with analysts.

“Hopefully, the equity markets will return to some semblance of normal multiples and therefore recover,” Owens said.

Caterpillar’s pension obligations were $5.8 billion underfunded at the end of 2008, according to a Jan. 26 filing. The Peoria, Illinois-based company said in the filing it aims to keep its portfolio 70 percent invested in equities.

“Some companies that see the market as near the bottom and are expecting a rebound do not want to take money out of equities now and are definitely not rebalancing,” Mercer’s Hartshorn said.

Trade groups have lobbied lawmakers on four Congressional committees for more regulatory changes, according to the lobbying group Committee on Investments of Employee Benefit Assets.

One proposal would allow companies to make contributions to their pension funds for 2009 and 2010 based on 105 percent and 110 percent of their 2008 required contribution. Another proposal would prevent the growth in pension-fund shortfalls for companies paying interest on their plans’ 2008 losses.

No legislation has yet been introduced, the group said.

“Members of Congress do recognize there is a problem,” the Committee on Investments’ Schub said. “Unfortunately, this stuff is complicated and they have so much on their plate.”

Members of Congress better start paying attention to the pension tsunami because it will only get worse from here.

I expect equities to rally in Q2, but don’t be fooled into believing this is the beginning of a new bull market. That is a pipe dream. There are still far too many challenges that plague the earnings of major corporations, including the underfunded status of their pension plans, weak credit markets and rising unemployment around the world.

In my last post, I wrote about how the Hospitals of Ontario Pension Plan (HOOPP), which runs pensions for Canadian health-care workers, increased its bond holdings and cut equity investments to limit losses in 2008.

National Pension Service, which avoided losses in last year’s global rout, will target a domestic stocks weighting of between 10 percent and 24 percent, wider than the current 12 percent to 22 percent range, the welfare ministry said today in an e-mailed statement. The change may “prevent us from excessively buying stocks, in order to meet the permitted limit, when stock prices fall,” the statement said.

“The fund appears to have a bit of a negative view for equities,” said Park Se Girl, a fund manager at Meritz Asset Management Co. in Seoul, which oversees the equivalent of $1.6 billion in assets. “National Pension has served as a safety net for the market when stocks fell as it has to buy stocks to be in the permitted range, and now that role may weaken a bit.”

The government in January last year asked National Pension Service and other state-run investors to buy shares ahead of schedule to stabilize the market as the global meltdown accelerated. National Pension Service’s 236 trillion won ($174 billion) of assets were little changed in 2008 as bond holdings countered the equities slump, outperforming other nations’ funds.

Albeit the worst return in the Korean fund’s two-decade history, it beat the 26.6 percent tumble for the California Public Employees’ Retirement System in the seven months ended Jan. 31, and the 31 percent plunge for Singapore’s Temasek Holdings Pte in the eight months ended Nov. 30.

South Korea’s fund will now get more flexibility to mix investments between stocks and bonds. National Pension, which was set up in 1988 and covers private-sector employees and those who are self-employed, posted returns of more than 5 percent between 2003 and 2007.

“The recent volatility in domestic stocks has increased much above the level we previously anticipated,” the welfare ministry’s statement said. “High volatility is likely to continue for the time being as expectations of economic recovery vie with concern about a prolonged recession.”

South Korea’s benchmark Kospi stock index has gained 9.3 percent this year after tumbling 41 percent last year, the gauge’s worst performance since 2000, when the technology bubble burst. The global rout has wiped out more than $32 trillion in stock values since the peak in October 2007.

It is interesting to see how some pension funds are still aggressively allocating to equities while others are scaling back risk, allocating more to bonds.

My view is that while equities have been clobbered and bond yields are at historic lows, it is foolish to conclude that we hit bottom. In times of great uncertainty, it’s better to err on the side of caution, allocating more to bonds to minimize your downside risk.