One cannot help but note that Team Obama is trying to derail serious proposals regarding financial reform for Wall Street at the G20 meeting, as we suggested they would.

The concerns raised by US revelations at the G20 today about new intelligence regarding Iran’s secret underground nuclear facility have overshadowed financial reform and economic problems, and Gordon Brown’s prescription yesterday that the G20 would become the new governing council for the world. It also smothered coverage of the hearings on HR 1207, the audit of the Fed today.

Why waste a crisis indeed. Especially when you get a two-fer. 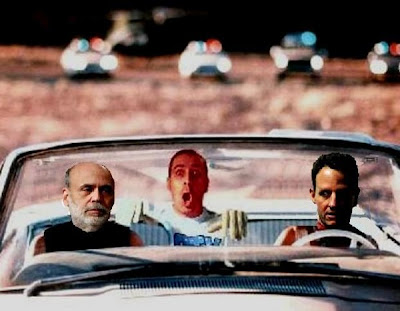 Yesterday we put forward a somewhat lengthy piece on the Fed and reverse repos being considered titled Fed Eyes US Money Market Funds.

There is a key quote in there that we would like to highlight today.

The central bank is now considering dealing with money market funds because it does not think the primary dealers have the balance sheet capacity to provide more than about $100 billion… Money market mutual funds have about $2.5 trillion under management…”

Only 100 billion in available capital for a relatively risk free short term investment in the global banking system including the Primary Dealers, does seem a bit tight for a set of such ‘well capitalized’ banks, especially since they aren’t making many loans, preferring to speculate in the markets.

Couple that with the revelation reported some time ago at ZeroHedge and covered here, that the Fed is taking on more than 50 percent of the longer dated Treasuries, and there is only about Ten Billion left on their balance sheet for expansion, and you get the picture of a financial system not cruising into recovery but heading straight at a confrontation with reality.

We have considered the possiblity that the Fed is doing this to place exclusively AAA and Treasuries on the balance sheets of the Funds, aka the Shadow Banking System, who are holding some seriously awful garbage. This is why we highlighted the at odds relationships the funds have had with the commercial banks and the Fed in the past. This does not quite make sense unless those reverse repos are of a very long duration or rolled over automatically for a long period of time. A proper program such as was extended to the banks where the Fed buys the assets outright would be that solution. It made more sense to us that the banking system is still very tight on good capital assets and liquidity.

Here is an update from ZH that is somewhat compelling if one understands the implications. Visualizing the Upcoming Treasury Funding Crisis.

“Summary: foreign purchasers are congregating exclusively around the front end
of the Treasury curve, meaning that the primary net purchaser of dated bonds has
been the Federal Reserve. As everyone knows by now, the Fed only has $10 billion
left out of the $300 billion total allotted for Treasury QE. That should expire
next week. … The time of unraveling may be upon us sooner than most think.”

Do Tim and Ben = Thelma and Louise?

As the Eagles sang: