By Willem Thorbecke, Senior Research Fellow at the Asian Development Bank Institute and a Consulting Fellow at Japan’s Research Institute of Economy, Trade, and Industry, originally posted at VoxEU

Yves here. As we have pointed out in several posts, the idea that China’s announcement on its currency policy change is “abandoning its dollar peg” is a misreading, and it’s also clear that China is not making meaningful changes anytime soon. But it’s still worth considering what a move like that might actually do. To the post:

The People’s Bank of China announced on 19 June that it would abandon its dollar peg and switch to a managed floating exchange rate regime with reference to a basket of currencies. Will this move help to rebalance the global economy?

Figure 1 shows that China’s trade surplus has been concentrated in “processing trade”. Processing trade refers to a customs regime under which parts and components are imported into China duty free and used to produce final goods that are re-exported to the rest of the world. Neither the imported inputs nor the final assembled goods enter China’s domestic market. 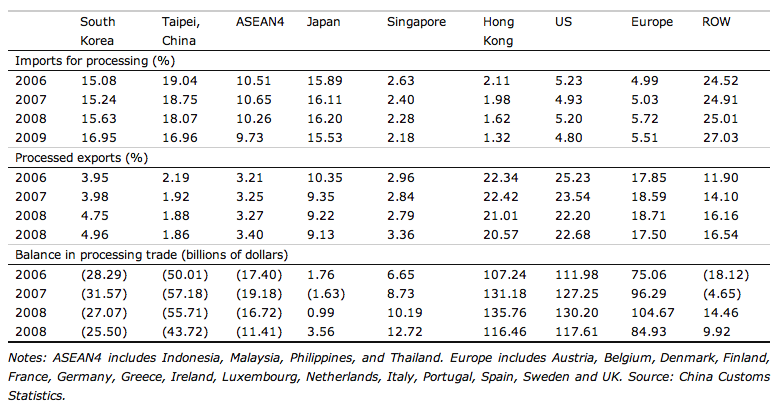 Two-thirds of the imports for processing come from East Asia; the US and Europe account for only 5% each.

For processed exports, about 20% goes to East Asia, the US, Europe, and Hong Kong.

Addressing the statistical problems of trans-shipments

Kwan (2006) noted that, in the presence of entrepôt trade, import data are much more accurate than export data. When exports from China are trans-shipped through Hong Kong or Singapore, the Chinese government might not know the final destination of the goods. They thus record the goods as being exported to Hong Kong or Singapore.

When the exports arrive at their final destination, however, the importing country records the goods as having come from China. Kwan thus recommends using import data from trading partners to calculate bilateral trade balances.

Given this pattern (large trade deficits with East Asia and even larger surpluses with the West), an appreciation throughout East Asian supply chain countries would help rebalance the processing trade by affecting the cost competitiveness of a much wider share of the value added than would happen with only a renminbi appreciation. That is, an East-Asia-wide appreciation would affect the relative euro and dollar prices not only of China’s value added but also of the value of imported inputs coming from the rest of Asia. Formal evidence indicating that an appreciation throughout Asia would affect China’s processed exports has been presented by Ahmed (2009) and in my recent research with Gordon Smith (Thorbecke and Smith 2010).

In our recent paper (Thorbecke and Smith 2010), we construct a single integrated exchange rate variable to measure changes in the relative foreign currency costs of China’s entire output of processed exports. Using dynamic ordinary least squares estimation and annual panel data over the 1992-2005 period, we argue that a 10% appreciation throughout the region would reduce processed exports by 10%. Thus, a joint appreciation throughout East Asia would help to rebalance processing trade.

By abandoning its de facto dollar peg and adopting a regime characterised by a multiple-currency basket-based reference rate, China may facilitate a concerted appreciation in the region. China’s dollar peg had prevented Asian countries from appreciating together. With China’s currency pegged, neighbouring countries competing with China felt they also had to prevent their currencies from appreciating.

When currency markets opened on 21 June after the announcement by the People’s Bank of China, the renminbi and other East Asian currencies appreciated together. If China can gradually increase the band around its new reference rate, the huge surpluses generated within East Asian production networks would cause currencies in the region to appreciate together.

Market forces could allocate these appreciations across supply chain countries based on their value-added in processing trade. Stronger exchange rates would then reduce processed exports to the US and Europe, helping the region to redirect production away from western markets and towards domestic consumers.