We were surprised that Ireland capitulated so quickly to pressure from its Eurozone confreres and accepted a punitive bailout of its government, when it was in fact its banks that were a mess. As we noted in November:

Note that the Irish government is still holding out for a banking-system-only bailout, even if the funds are channeled through the government. Since I am not aware of any IMF bailout being done on this format, it’s likely to be a sticking point if the Irish refuse to back down (recall that the government itself is under no immediate funding pressure; they have six months before they need to go to market, which is an eternity in crisis-land).

The other major bone of contention is Ireland’s super-low corporation tax, which served as a significant incentive for multinationals to set up shop in Ireland. The Germans and French are insistent that it be increased to balance the budget. The Irish objections here are plausible, particularly since the low rates are a cornerstone of their national strategy (do you want 12.5%, the current corporate tax rate, of a decent sized number or 25% of a vastly smaller number?). The Irish have made it clear that they are non-negotiable on this point, and as keenly as the rest of the eurozone would like to beat Ireland back into line, I doubt they’d be willing to risk negotiations failing over this issue.

Fast forward, the Irish agree to a deal, the ruling party suffers substantial losses precisely for accepting the terms demanded by the eurozone and the IMF, and the new incumbents are much less willing to play nicely with counterparties who are engaging in what amounts to “every man out for himself” behavior, no matter what spin is put on their demands. From Gideon Rachman of the Financial Times:

….the fundamental European problem is now not economic – it is political…

The row involving Ireland last weekend makes the point. The new Irish government was told it would get a cut in the usurious interest rate that the rest of Europe is charging it, only if the Irish in turn agreed to raise their super-low corporate tax rate. This is a concession that no Irish government can make. Ireland’s ability to set its own corporate tax rate has become a symbol of national sovereignty. Successive governments have promised never to give it up – it seems all the more important as a means to attract investment, as the country struggles to revive its economy.

Yet, for the French and German governments, it is politically imperative to demand a change in Ireland’s tax rates. How can they persuade voters to make concessions to a country that is seen as stealing jobs through “tax-dumping”?

All the governments involved are under enormous political pressure. Enda Kenny, the new Irish prime minister, has just seen the last Irish government eviscerated at the polls by voters enraged by the euro crisis. Nicolas Sarkozy, the French president, is facing opinion polls for next year’s presidential election that see him trailing behind Marine Le Pen, of the far right National Front, which rejects the European project as alien to French national interests.

As for Angela Merkel, the German chancellor, she too fears electoral disaster. The German press and public are screaming about the prospect of further emergency loans to Europe.

In the last few days, there has been a sudden recognition, at least on the part of some Irish commentators, that Ireland has the upper hand. A default would be a disaster for European banks, and anyone who has been paying attention knows that the refusal to restructure periphery country debt is a way to avoid bailing out not very popular German and French banks.

No one here believes a word that comes out of the European Commission, the ECB or the organs of the Irish state.

The traders I chatted to see the numbers….all agree that the way to go is to default on the bank debt and start again, protecting the sovereign in the process…..all of them believe that, if Ireland stops paying the ‘‘odious’’ bank debts, the economy will recover extremely quickly. They also indicated that they would consider buying Irish government paper if we got rid of our bank debt. But with the bank debt, there is no way…

Unfortunately, it now seems that the Irish banks are going to need an awful lot more cash.

Let’s imagine for a minute that the government is crazy enough to commit another €50 billion (which is not an unlikely figure) to the banks, which would increase our government debt to €195 billion.

Then add the deficits that we will need to fund for the next five years. That’s about another €45 billion.

This gives leaves our national debt at €240 billion.

Even if we manage to finance all of that at 4 per cent (which is the lowest possible figure under current arrangements), it would cost nearly €10 billion a year in interest payments alone.

That is equal to 80 per cent of the government’s income tax take in 2010. It is unsustainable. There is no way around it.

Paying interest on debt is a draw on an economy – it means money that could be invested in an economy is leaving the country. If we are paying €10 billion in interest every year and our GDP is in the region of €150 billion, we need to expand the economy by more than €10 billion each year, just to stand still.

That leaves the GDP at the same level as it was at the start of the year: €150 billion.

The economy will have to run to stand still. Something has to give….

A structured default now is the game-changer we need. The view from Wall Street this afternoon is that this is the answer.

Consultants from Blackrock – the world’s largest investment firm, with €2.5 trillion in assets under management – are taking a ‘‘deep dive’’ into the banks’ loan portfolios to determine their likely losses over time.

Blackrock is looking at loan-to-value ratios, the impact of forbearance, loan restructuring and other granular elements not included in the broader stress tests.

Earth to base, this is a garbage in, garbage out exercise You can’t value loans against illiquid real estate by sitting around playing with models. Our Swedish Lex, who worked on the Swedish bad debt liquidation exercise, said a lot of assets were pretty much impossible to value (or more accurately, yes you could come up with a rationale for slapping a number on them, but anyone with an iota of common sense would know it was garbage). So I suspect the reason for Blackrock coming in is completely political: to rationalize whatever number is deemed to be necessary and possibly to prevent one avenue of escape for the Irish, that of putting out an estimate of banking sector cash needs that raises justified concerns about UK and Eurobank solvency (given Blackrock’s useless but impressive modeling skills, any dissenting views, no matter how well informed, will be dismissed). And in case you think Irish bank solvency is not tightly connected to bank solvency in the eurozone, consider this Financial Times editorial from last year:

And before you think this talk of Ireland defaulting is just some wishful thinking on the part of naive journalists and bloggers, Irish ministers, in particular ones with relevant portfolios, are talking about it openly. From BreakingNewIreland (hat tip Richard Smith):

The Junior Minister for European Affairs has said Ireland holds the bargaining card in the negotiations over the interest rate on the EU/IMF bailout package.

Lucinda Creighton said it’s not in the interest of other European countries for Ireland not to be able to repay this loan.

She said this fact will give Ireland more bargaining power in these negotiations: “The very worst case scenario would be for some sort of sovereign default in Ireland which would have a ripple effect across the EU,” Ms Creighton said.

“It would have devastating consequences for the euro, I think that our partners around the EU table know that.”

The eurozone is up against Dani Rodrik’s trilemma: 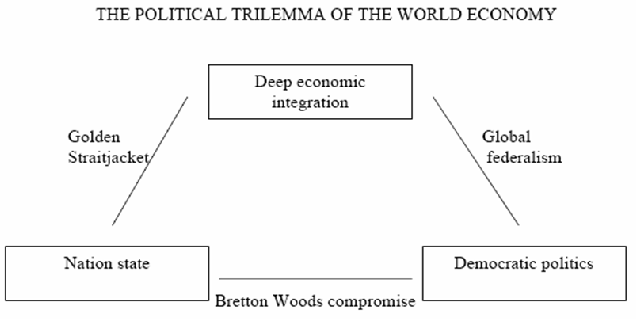 You cannot have all three corners of the triangle at once. The creators of the European Union knew that the end game was the dissolution of nation states. But the inability to work out a process for achieving the intended aim meant the architects left troublesome issues unresolved, with the idea that inevitable crises would force resolution.

But what they failed to anticipate is that the costs of these crises would be visited on the inhabitants of particular nation states, and that would lead them to rebel against the “inevitable” integration. As long as democratic mechanisms are intact in enough of the countries being pressed to wear the austerity hairshirt, revolt is indeed possible. Economists argue that the cost for any nation to exit the eurozone is prohibitive. But how does that stack up with a “rescue” program that virtually guarantees continued economic contraction and depopulation for Ireland?. Faced with two unattractive alternatives, the desire for self-determination and for punishment of coercive European technocrats may make supposedly irrational moves seem compelling.