The kindest thing that can be said about the 50 state attorneys’ general negotiations over foreclosure abuses is that it is increasingly obvious that there will not be a deal. The leader of the effort, Iowa’s Tom Miller, has completely botched the effort. There was no way to have any negotiating leverage with intransigent banks in the absence of investigations. Miller has changed his story enough times on this and other fronts so as to have no credibility left. But whether there were no investigations (as other AGs maintain) or whether they did some (as Miller, contrary to a staffer’s remarks, now insists), they were clearly inadequate.

We’ve found the rumor, that Miller was angling to head the Consumer Financial Protection Bureau, credible. It would explain his unduly cozy relationship with Federal banking regulators, as well as his efforts to wrap up negotiations quickly, which reduced what little bargaining power he had (time pressure means a party that drags its feet can extract concessions).

But like so many zombies that inhabit the financial landscape, the mortgage settlement negotiations refuse to die. They were unlikely to succeed, given that some of the attorneys general who joined late in the game were opposed to the entire concept. That means they signed up for the sole purpose of repudiating any deal later.

Given the size and disparateness of his group, and the fact that some members were there simply to discredit it, it was incumbent upon Miller to forge a solid core with the hopes of bringing some fence-sitters along. That is another reason investigations were critical. It would be harder for Republican AGs in states hard hit by the foreclosure crisis like Florida to reject a settlement of documented abuses. It becomes more risky to repeat the bank party line that they did nothing wrong when your colleagues have evidence in hand to the contrary.

So what is the latest episode in this sorry fiasco? Shahien Nasiripour of Huffington Post reported that the AGs are putting forward another proposal next week, one watered down to reflect bank “concerns”. Note we lambasted the AGs’ first iteration as being consisting almost entirely of telling the banks they need to obey current law. Huh? It asked for only two new things: single point of contact (which we deemed overkill as presented; there are better ways to address the customer handling horrorshow called mortgage servicing) and an end to dual track.

But the most important part is what wasn’t there, meaning the most critical terms: penalties versus the breadth of release. These are the only terms that really count, the rest is noise. And with those issues NOT being on the table, but instead being the subject of leaks in the media, these negotiations can’t even be considered to be serious.

Of course, Miller’s having failed to solidify a constituency means putting forward concrete proposals on the most contentious terms will expose fault lines. The Republicans AGs refuse to consider bank-funded principal mods, the excuse being it will lead to a rapid increase in immorality and fornication strategic defaults. We don’t like them for a different reason: in isolation, they are certain to be too small to accomplish much and will simply reinforce the servicer-friendly idea that mods aren’t worth the bother (using the penalties to fund writedowns of second mortgages and an infrastructure that could vet borrowers for mods that came from reduction of investor principal would have been a much better way to go). Many of the Democrat AGs are correctly unwilling to give the banks a broad waiver.

The latest report from Shahien shows that there are large gaps in the positions of the key parties:

….it is not expected to detail any fines to be meted out in response to banks’ flawed practices, which include improper home seizures and other actions that broke federal and local laws.

Officials also remain undecided on a possible mandate to banks to reduce borrowers’ loan balances, according to the three sources, who were not authorized to speak publicly about the matter. Banks are reluctant to slash mortgage principal balances; some agencies in the Obama administration want to require it, as do most of the state attorneys general leading their mortgage probe. A vocal minority — all Republicans — are opposed.

The report confirms my worst suspicions as to who Miller is working for, and it sure isn’t the cause of justice:

Now, the top law enforcement officers in some states, most notably New York Attorney General Eric Schneiderman, want to make sure they are not constrained in taking legal action against mortgage firms for violations of state and local laws.

Some have grown frustrated with the pace of negotiations, people familiar with the matter say, and fear a broad release from legal liability will likely be sprung on them at the last minute as a condition of their settlement with the targeted banks. Attempts to begin discussions over the liability release have thus far been thwarted, however.

Mind you, these concerns are coming from the attorneys general! Miller has no business refusing their queries over such a critical negotiating issue. The only reason to withhold that information is that he already plans to offer a wide-ranging release, and he knows if he told his peers now, many would bolt. The fact that he clearly intends to use an element of surprise is proof he is working against them, not with them.

The annoying part of this update is that the powers that be are maintaining the fiction that they are aware of all mortgage related abuses, when nothing of the kind is true. We’ve discussed repeatedly that the one investigation, that of 2800 loan flies by the Foreclosure Task Force at the end of last year, omitted many key issues, such as chain of title issues, improper application of payments, use of inflated and pyramiding fees, and improper filings and impermissible fees during Ch. 13 bankruptcies.

But look at the negotiating issues. As Shahien indicated earlier, investors thought the initial proposal was weak. The AG/what is left of the Federal side (recall banking regulators signed consent orders last month, taking themselves out of the picture) are divided. They do not have a consensus on the key items, the nature and scale of the fines and the nature of the release. This level of division gives the unified bankster side the upper hand.

And we have the banks peddling propaganda:

Representatives of the five firms — JPMorgan Chase, Bank of America, Wells Fargo, Citigroup and Ally Financial — made a presentation which they claimed showed why mandating principal reductions would not prevent a significant number of new foreclosures and would be harmful to the general economy.

The banks said “it would trigger a stampede of strategic defaults,” said an official familiar with one of the two discussions, referring to instances in which borrowers who can afford to make good on their obligations choose not to. Strategic defaults are much more common in the business world than among homeowners, according to experts who study the issue.

Let me first turn over the mike to Dave Dayen:

There is no evidence whatsoever of strategic defaults currently, despite plenty of claims by the same banking representatives… So far this phenomenon is non-existent in the residential mortgage market, and I’d say that banks are misrepresenting the facts in making this argument.

Dave is right that there is NO evidence supporting the notion that strategic defaults are taking place. The few academic studies on the topic are embarrassingly bad. They either rely on surveys of intent or an unproven assertion that borrowers that default suddenly are strategic defaulters. We’ve debunked both ideas here. Major corporations long ago abandoned the use of surveys in product planning because they were utterly unreliable in assessing buyer behavior In the overwhelming majority of cases, the surveys would show much greater willingness to act than proved to be the case. From what we can tell (and others who have tried to get a grip on this question have come to similar conclusions) sudden defaulters have hit a financial wall (job loss, medical emergency, loss of hours) and given that they have no/negative equity in their home, it makes no sense to deplete retirement savings (which lenders cannot seize in the event of bankruptcy) or go to other heroic measures. Better to preserve a smidge of cash so that one can move to a rental rather than wind up living in your car or on the street.

Having said that, there probably are a few strategic defaulters, with second homes the logical candidates. But as we have stressed, the costs of defaulting are high, and the idea that people would do it casually is nonsense.

Here’s an indirect proof that the banks’ assertions that strategic defaulter are the new commies in the woodpile are bunk: the frequency of searches on “strategic default” versus “short sale,” HAMP, and “mortgage modification”: 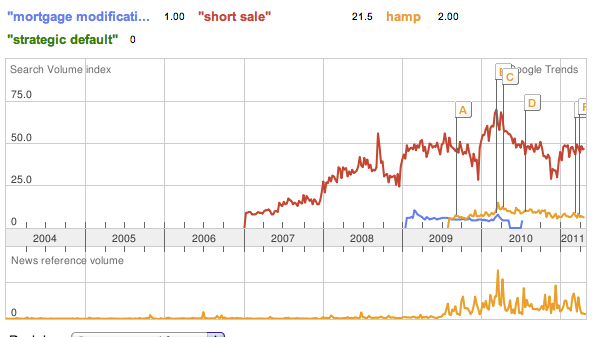 Notice how there are so few searches on “strategic default” in the US that it does not even register. This is an informal indicator that Americans spend far more time getting information first about short sales and second about the fairly well publicized HAMP program than they do about scheming to stiff their lender.

And here is a second interesting chart:

This does not look very organic, now does it? A sudden upsurge, and by interesting happenstance right around the time the robosigning scandal broke. I don’t mean to sound paranoid, but this is the sort of pattern you’d expect to see if a large messaging campaign were launched.