In case you doubted that America needs more progressive taxation, the case in its favor has just been made in a study, “Executive Excess 2011: The Massive CEO Rewards for Tax Dodging,” by the Institute of Policy Studies (hat tip readers aet and Vlad via the International Business Times). The report found that the CEOs of 25 major companies paid themselves more than their companies paid in Federal income taxes. Exhibit 1 on page 31 names and shames them (well, assuming they are capable of shame), and they include John J. Donahoe of eBay, Robert Coury of Mylan Labs, Jeff Immelt of GE, and Robert Kelly of Bank of New York. The New York Times article on the report elicited some not-convincing rebuttals.

Note that this was 1/4 of the 100 companies with the highest reported CEO pay. Perhaps it’s time to restrict the total pay over a threshold level to all C-level execs to a percentage of Federal income tax payments?

The summary also notes the increasing disparity between average worker and top executive pay, with the multiple of 263 in 2009 rising to 325 in 2010.

The report debunks the idea that the pay reflected superior performance in any arena other than tax avoidance (note that other studies have found that CEO pay is negatively correlated with performance):

What are America’s CEOs doing to deserve their latest bountiful rewards? We have no evidence that CEOs are fashioning, with their executive leadership, more effective and efficient enterprises. On the other hand, ample evidence suggests that CEOs and their corporations are expending considerably more energy on avoiding taxes than perhaps ever before — at a time when the federal government desperately needs more revenue to maintain basic services for the American people. This disinvestment also undermines the infrastructure and services that small and large businesses also depend upon.

Investigative journalists and tax research organizations have been documenting how U.S.-based global companies are aggressively shearing — and even totally eliminating — their federal income tax obligations. This past March, for instance, The New York Times traced the steps General Electric has taken to avoid U.S. corporate taxes for the last five years. Citizens for Tax Justice, as part of a forthcoming study on tax avoidance among the Fortune 500, has identified 12 corporations that have paid an effective rate of negative 1.5 percent on $171 billion in profits.

The study includes a table showing how much the 25 companies targeted spend on political contributions and lobbying. It also cites an idea presented here at Naked Capitalism by Doug Smith, that of a maximum wage: 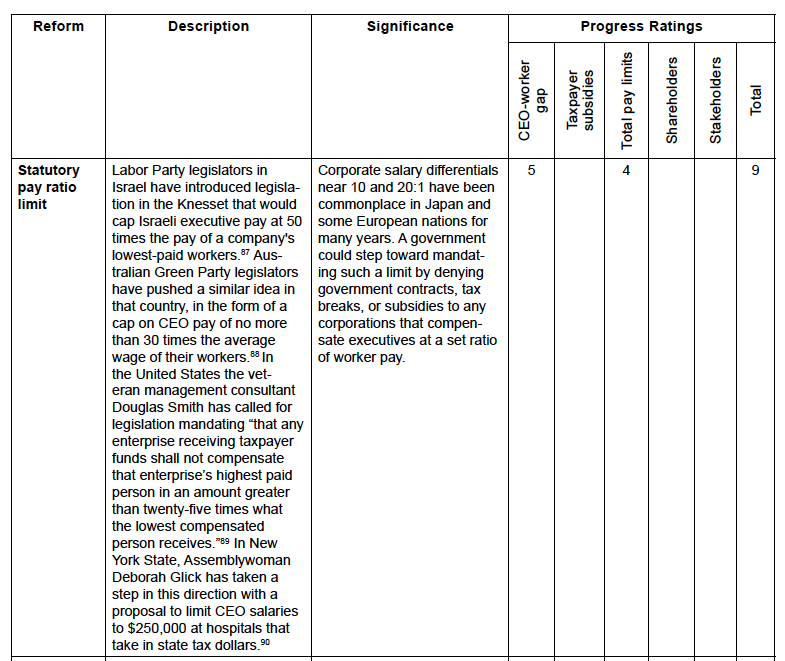 So, be it proposed:

“That any enterprise receiving taxpayer funds shall not compensate that enterprise’s highest paid person in an amount greater than twenty-five times what the lowest compensated person receives.”

First, note that this proposal would not apply to enterprises that do not receive any taxpayer funds.

For those, however, receiving bailouts, deposit insurance, government guarantees, tax breaks, tax credits, other forms of public financing, government contracts of any sort – and so on – the top paid person cannot receive more than twenty-five times the bottom paid person. This ratio, by the way, is what business visionary Peter Drucker recommended as most effective for organization performance as well as society. It also echoes Jim Collins who, in his book Good To Great, found that the most effective top leaders are paid more modestly than unsuccessful ones. And, critically, it is a ratio that is in line with various European and other nations that have dramatically lower income inequality than the United States.

Note, second, that this identifies the top paid person – not the CEO. Even though outrageous CEO pay and its ill effects on severe income inequality is much in the news, CEOs are not always the highest paid person.

Third, the proposal uses a ratio – 25-to-1 – instead of an absolute dollar figure. If a taxpayer funded enterprise wishes to pay the top person, say, $50 million, they can do so: just as long as the lowest paid person receives $2 million. In other words, instead of today’s limitless top wage being supported by taxpayer money – that is, socialism for the rich and only the rich — this proposal is equitable toward all.

Fourth, the choice of compensation is made by the enterprise – not by government officials.

Fifth, this approach to the maximum wage dramatically benefits the economy through some blend of more job-creating investment by the enterprise (through deploying higher retained earnings), and/or more consumer spending, savings and investment because of increased take home pay (and/or shareholder dividends) for the many instead of the few. It would, for example, immediately provide stimulus to restart our heavily consumer-driven economy.

Sixth, this proposal is competitively neutral: all enterprises using taxpayer funds must abide by the same 25-to-1 ratio of top-to-bottom compensation. In most industries, competitors respond to opportunities similarly; that is, if there are government opportunities, all try to take them and, if there are no such arrangements, none do. Nothing changes except the uses to which taxpayer funds get deployed as compensation. The new maximum wage rule levels the playing field for all competitors.

Nor, seventh, would this proposal have any adverse effect on the market for talent. Again, all enterprises are subject to the same rules. Moreover, there’s never been any – zero, zilch, nada – evidence that top pay correlates with sustained enterprise performance. Indeed, quite the reverse. Which, again, is why Drucker, Collins and others all note that talent and performance are not correlated to income inequality-levels of executive pay. The more likely result is the opposite: the maximum wage ratio will put enterprises using taxpayer funds on a better, sounder path to performance than those who don’t use taxpayer funds!! Meaning, of course, that such enterprises will attract the talent they need – not the talent they do not need.

Eighth, this proposal can and should be enacted by all federal, state and local jurisdictions that provide taxpayer funds to enterprise. And, of course, with the appropriate inclusive definitions of ‘compensation’ (salary, wages, bonuses etc) and “person’ to avoid cheating and evasion.

Ninth, enforcement will be inexpensive. Enterprises would be required to submit just two numbers to the appropriate tax authority: the highest and lowest compensation figures. If the ratio is in excess of 25-to-1, the offending enterprise will be given a simple choice: claw back the top earner’s compensation to the appropriate level; or, within, say, 30 to 45 days, pay all of the lowest earners the required amount; or, a combination of the same steps needed to bring the enterprise in line with the maximum wage rule. (If deemed necessary, generous rewards to anonymous whistleblowers could support monitoring and compliance efforts).

Tenth, and finally, remember that we’re talking about OUR MONEY. It’s not the ‘government’s money”. It’s OUR MONEY. And we insist that enterprises wishing to be funded and/or compensated and/or insured and/or tax advantaged with OUR MONEY abide by the maximum wage in order to reduce destructive, economy killing and unhealthy income inequality. When publicly funded companies operate within the 25-to1 maximum wage band, we all benefit.

It is the free choice of free enterprise whether or not to use OUR MONEY. If you are part of an enterprise and wish to pay anyone, including yourself, more than today’s all-too typical extreme, greater than 300 times the lowest wage earner, go ahead.

But do not use OUR MONEY.

Hopefully this study will provide more impetus to efforts to reform the corporate tax code and executive compensation. As we’ve discussed at length in earlier posts, the modern public company is an excellent vehicle for looting. Public shareholders are too weak and too transitory to have the means and motivation to curb the rent extraction by the executive group and the board.