Last month I wrote an article called “The ECB is the difference” which claimed the ECB was the pivotal institution in the European sovereign debt crisis. I presented two options that the European Central Bank had in relieving pressure on European sovereign debt markets. Option A was monetisation i.e. buying up sovereign debt or guaranteeing a specific yield or spread. Option B was Eurobonds i.e. where “the ECB buys an agreed-upon portion of the existing debt from the sovereigns and then uses these funds to back the [Eurobond] supranational debt.”

My thinking at the time was that Spain and Italy were not insolvent and yet their bonds were selling off as if they were. To me, this had the hallmarks of a classic liquidity crisis which necessitated a lender of last resort to fund the solvent but illiquid sovereigns and prevent dead weight economic loss. The ECB has unlimited firepower and that makes it the only institution which can credibly end liquidity crises in Euroland. And indeed, we see that after the ECB went ahead and bought Italian and Spanish bonds as I suggested they do, yields fell dramatically – the most ever in a single week since the Euro was formed.

It has been clear to me that this was the endgame. As I said in November of last year, there are three options for the euro zone: monetisation, default, or break-up. In my view, the political costs of break-up are still too high, so monetisation and default is what we have seen and will continue to see for some time still. What was not clear, even in the hours before the ECB did decide to buy Spanish and Italian debt, is what the quid pro quo would be for the ECB to move. Elga Bartsch of Morgan Stanley said fiscal austerity would be the pre-condition – and she appears to have been right as Spain and Italy have accelerated plans for fiscal consolidation.

As to Option B, euro bonds, we are now seeing movement on that front. Reuters reports that the German government no longer rules out euro bonds based on a Welt am Sonntag article. The original German article title reads “Deutschland wird zum Zahlmeister Europas” which translates as “Germany has become the paymaster of Europe”. The main point of the article is to highlight the fact that despite official denials by top politicians from the ruling coalition government, euro bonds are indeed being considered as an option to save the single currency. The article says that these bonds would cost Germany €47 billion a year in higher interest rate costs.

I will write further on this issue. But, for now, I want to segue into some thoughts on civil unrest and austerity. Below is a graphic in German from that article showing the relative debt load of leading developed economies. 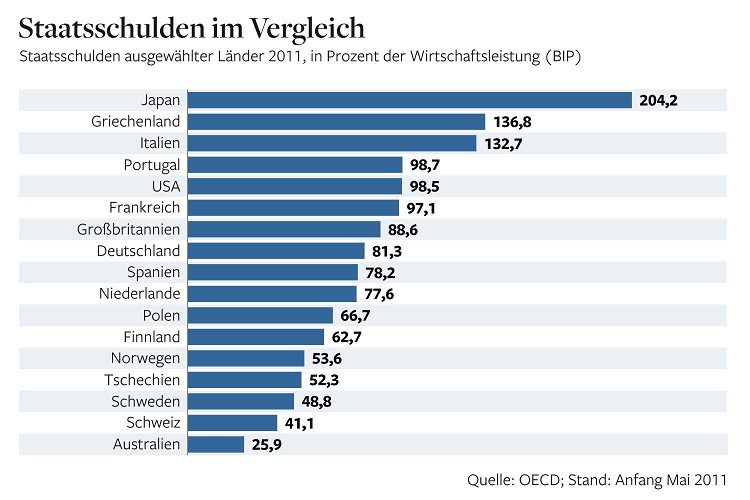 Notice that Spain’s debt load is lower than Germany’s. I think “Spain is the perfect example of a country that never should have joined the euro zone” because the euro has acted like a gold standard for the country, which has forced Spain into austerity, a deflationary policy path. And that’s the sort of outcome which leads to civil unrest, economic nationalism, and right political extremism.

For example, recent research suggests that the austerity we see in places like Spain and Italy will lead to social unrest. “Austerity and Anarchy: Budget Cuts and Social Unrest in Europe, 1919-2009” is the title of the paper published by the Centre for Economic Policy Research. This paper finds that:

From the end of the Weimar Republic in Germany in the 1930s to anti-government demonstrations in Greece in 2010-11, austerity has tended to go hand in hand with politically motivated violence and social instability. In this paper, we assemble cross-country evidence for the period 1919 to the present, and examine the extent to which societies become unstable after budget cuts. The results show a clear positive correlation between fiscal retrenchment and instability.

Our results therefore make clear that countries should not expect right-wing parties to get majorities unless growth declines quite as much as in the 1920s. Nevertheless, even with a less significant fall in economic growth rates, a rise in support for extreme parties is likely to change political outcomes – for example through their impact on incumbent parties’ political platforms.

So what we should expect is a high level of political volatility and social unrest in Italy and Spain (as well as in Ireland, Greece and Portugal) and an increase in right extremism. The same is true regarding austerity and social and political outcomes in the US, by the way. If the level of social volatility accompanying this outcome is too great, the euro zone will break apart as the future right-leaning governments there will resort to economic nationalism and repudiate their debt by defaulting.

Eurobonds would certainly lower yields across the eurozone and reduce liquidity constraints that have required front-loaded deficit reduction attempts. The effect on Germany is arguable. But, at a minimum, euro bonds would minimize the potential for the extreme outcome from social unrest which I just outlined.

P.S. – We should give the ECB some credit here. Nine days ago I was saying this is a classic liquidity crisis and that “the time to act is now.” The ECB has acted.