The GAO released a report yesterday that provided some anodyne but nevertheless useful confirmation of many of the things most of us knew or strongly suspected about the Fed: it’s a club of largely white male corporate insiders who do a bit too many favors for each other. But the GAO seemed peculiarly to fail to understand some basic shortcomings of its investigation.

The report has the dry title FEDERAL RESERVE BANK GOVERNANCE: Opportunities Exist to Broaden Director Recruitment Efforts and Increase Transparency and is the result of an amendment to Dodd Frank by Bernie Sanders to audit the governance of the Fed. Sanders’ office published a useful list of highlights, such as:

The GAO identified 18 former and current members of the Federal Reserve’s board affiliated with banks and companies that received emergency loans from the Federal Reserve during the financial crisis including General Electric, JP Morgan Chase, and Lehman Brothers.

Under current regulations, Fed directors who are employed by the banking industry or own stock in financial institutions can participate in decisions involving how much interest to charge to financial institutions receiving Fed loans; and the approval or disapproval of Federal Reserve credit to healthy banks and banks in “hazardous” condition.

The report is very much worth reading. Roughly the first half discusses, in considerable detail, how the Fed is governed, for instance, the role of the regional Reserve Banks, how their Class A, B and C directors are selected. And a big chunk of the balance of the report, which the Sanders extracts ignored, discussed the lack of diversity in the key decisions makers at the Fed and discussed measures for improving that (the biggie was not taking people from the very top level of banks, since those are heavily white men, but from the next tier, which is more mixed).

This is an important issue, but not for the reason the GAO focused on. The Fed has always have the mandate of preserving the safety and soundness of the banking system, and later had the “dual mandate” added, of promoting price stability and full employment. It isn’t hard to see that the Fed has long been more interested in price stability, and Greenspan added a new mandate, which was that of preserving financial asset prices (note that that is also generally consistent with low interest rates).

Economist Joe Stiglitz has long advocated that labor should be represented on the Fed’s interest rate setting Open Market Committee, and this raises a point given short shrift by the GAO: the most important type of diversity missing from the Fed isn’t ethnic, racial, or gender, it’s class. 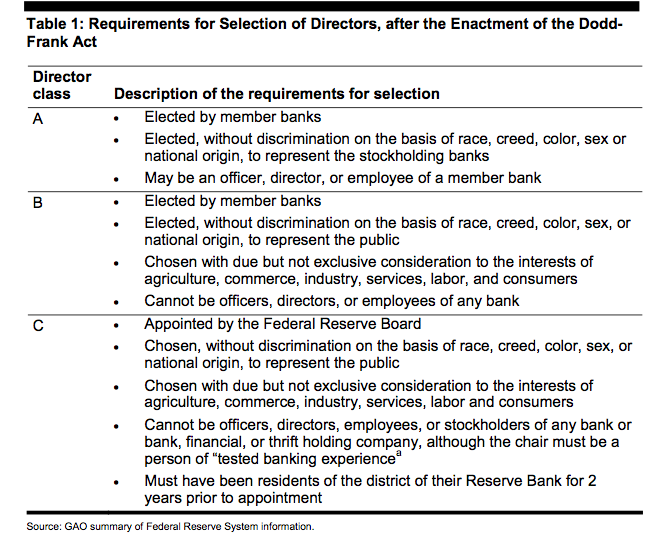 Both Class B and C directors are supposed to represent broader public interests, but Kathryn Wylde of the New York City Partnership illustrates how badly that works in practice. Her foundation is an advocate for large financial firm and big business donors. She had the nerve to try to tell Eric Schneiderman, New York state’s top law enforcement official, to back down on investigations that might hurt her meal tickets, in particular Bank of New York, which she has chosen to defend with particular vigor. This is unabashed cronyism.

And this points to a major gap in the GAO report. The GAO found evidence of conflicts of interest, such as the notorious incident in which former Goldman co-chairman Steve Friedman continued to be a Class C director even after Goldman became a bank without getting a waiver, and even worse, acquired more Goldman stock while privy to the Fed’s interest rate and rescue-related debates and decisions. But there is no way to know what conflicts the GAO missed, since the obligations to report conflicts are non-existant. The Fed has an official “Don’t ask, don’t tell policy”:

So as much as what the Sanders report unearthed was troubling, we have no idea how many unknown unknowns there are. This is why ongoing audits of the Fed are critical. It is hermetic, hopelessly biased towards large financial firms, and is too far removed from accountability even as its power and political role have grown. It needs to be forced to respond to interests of the broader community, not just favored insiders.