Even notice nothing is ever said in the mainstream media about Argentina’s economy, save that it had a big default? You’d never know the following about Argentina:

From 2002 onward, Argentina grown nearly twice as fast as Brazil, and has sported one of the highest growth rates in the world.

Its success is not dependent on a commodities boom

Inequality has fallen. Poverty and extreme poverty have fallen by roughly 2/3

What is particularly striking is how quickly Argentina’s economy rebounded after its default. From a paper by Mark Weisbrot, Rebecca Ray, Juan A. Montecino, and Sara Kozameh (hat tip reader Thomas Ross):

In December of 2001, the government defaulted on its debt, and a few weeks later it abandoned the currency peg to the dollar. The default and devaluation contributed to a severe financial crisis and a sharp economic contraction, with GDP shrinking by about 5 percent in the first quarter of 2002 and nearly 11% for the full year. However, recovery began after that one quarter of contraction, and continued until the world economic slowdown and recession of 2008-2009. The economy then rebounded, and the IMF now projects growth of 8 percent for 2011.

By contrast, the US economy contracted 6.8% in the fourth quarter of 2008, and shrank 2.6% in 2009. The US only now has reached its pre-downturn level of GDP, meaning nearly four years later versus Argentina’s three. In addition, Argentina has regained its trend line of growth, while it is not clear whether the US ever will. The Carmen Reinhart and Kenneth Rogoff work on severe financial crises has found that they result in “permanent” falls in the standard of living, but that has not been the case with Argentina. 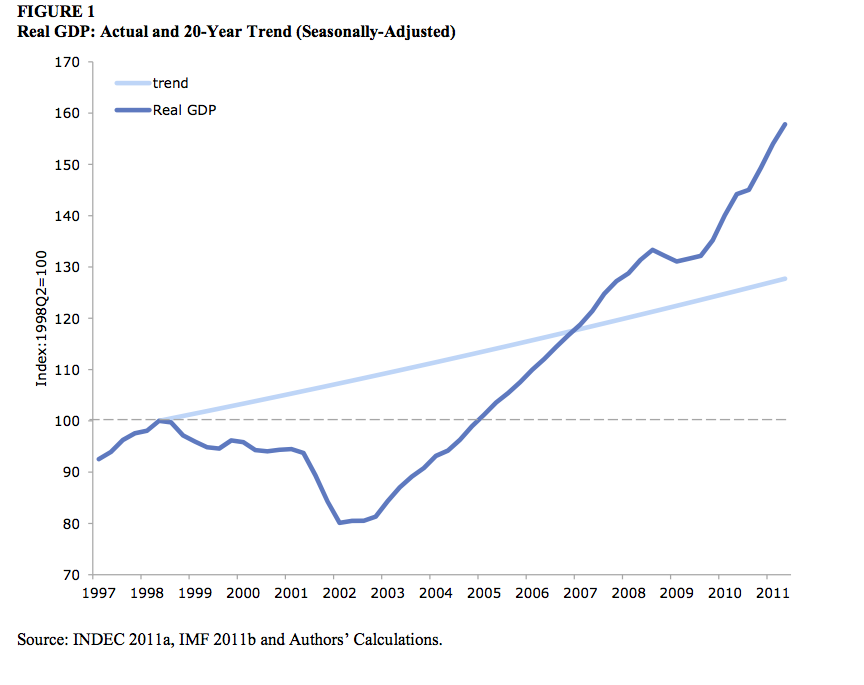 Admittedly, Argentina had an advantage the US lacked, that of a reasonable level of world growth as a backdrop. But we need to stress “reasonable” not robust. The advanced economies of the world ex Australia went into a slump in the dot-bomb era, and the US and Europe were running below potential through 2004. But the data show that Argentina’s success was not export driven:
It can be seen that the role of exports is not very large during the expansion of 2002-2008. It peaks at 1.8 percentage points of GDP in 2005 and 2010, and amounts to a cumulative 7.6 percentage points, or about 12 percent of the growth during the expansion. The story for net exports is even worse, with net exports (exports minus imports) showing a negative cumulative contribution over the period. The recovery is driven by consumption and investment (fixed capital formation), which account for 45.4 and 26.4 percentage points of growth, respectively.

Notice the Argentinian example disproves one of the Big Lie about default, that foreign capital will take a hike and the consequences will be dire. Again from the article:

As a result of the default, and the refusal of a minority of creditors to accept the eventual restructuring agreement in 2005, and subsequent legal action by these creditors and “vulture funds,” Argentina has faced difficulties borrowing in international financial markets over the last nine years. Since it has not been able to settle its debt with the government creditors of the Paris Club, it has also been denied some export credits. FDI has remained limited, averaging about 1.7 percent of GDP over the past eight years, with a number of serious legal actions taken by investors against the government.

Yet in spite of all of these adverse external conditions that Argentina faced during the past nine years, the country experienced this remarkable economic growth. This should give pause to those who argue, as is quite common in the business press, that pursuing policies that please bond markets and international investors, as well as attracting FDI, should be the most important policy priorities for any developing country government. While FDI can clearly play an important role in promoting growth through a variety of mechanisms, and foreign capital in general can, in some circumstances, boost growth by supplementing domestic savings, Argentina’s success suggests that these capital inflows are not necessarily as essential as is commonly believed. And it also suggests that macroeconomic policy may be more important that is generally recognized.

Shorter version: sacrificing your economy on the altar of the Bond Gods may not be such a good idea.

The one blot on Argentina’s success record is its inflation rate, which has been as high as 31%. I’ve had Brazilian readers contend that inflation is not as terrible as we Americans have been led to believe if you have good inflation accounting (something we never developed). Unlike our experience with stagflation, it has not been an impediment to growth:

Inflation may be too high in Argentina, but it is real growth and income distribution that matter with regard to the well-being of the vast majority of the population. By these measures, as we have seen above, the government appears to have made the correct decision not to fight inflation by sacrificing economic growth. . To take one important historical example, South Korea registered annual rates of inflation similar to those of Argentina in recent years, in the 1970s and early 80s, while it traversed the journey from a poor to a high income country.

The paper closes by stressing the implications for other debt-burdened nations:

Argentina’s experience calls into question the popular myth, as noted above, that recessions caused by financial crises must involve a slow and painful recovery. Argentina’s financial crisis and collapse were as severe as that of almost any country in recent decades; and yet it took only one quarter after the default to embark on a rapid and sustained recovery. This is not only because of the devaluation and improved macroeconomic policies, but because the default freed the country from having to be continually hamstrung by a crippling debt burden and by pro-cyclical policies imposed by creditors. It is these types of policies, along with the ultra-conservatism of central banks like the present ECB, that mostly account for the historical experience of delayed recoveries after financial crises. The Argentine government has shown that this bleak scenario is just one possible outcome, and that a rapid recovery in output, employment, poverty reduction, and reduced inequality is another very feasible path that can be chosen.

No wonder the IMF and the banksters don’t want Argentina to get good press. The Eurozone countries they are wringing dry might get ideas.