Nearly one Spaniard in four is unemployed, according to data released on Friday, as the country’s economic and financial predicament prompted a government minister to talk of a “crisis of enormous proportions”.The data from the National Statistics Institute showed 367,000 people lost their jobs in the first three months of the year. At this pace, Spanish job losses are equivalent to 1 million per month in the United States. That means more than 5.6m Spaniards or 24.4 per cent of the workforce are unemployed, close to a record high set in 1994.

Spain has become the new Greece. Actually, in many respects Spain is now worse than Greece. The Spanish unemployment rate is already so high and unlike Athens, Madrid has made no headway in reducing its public debt levels (whereas the Greeks are close to running a primary fiscal surplus at which point they could leave and turn the problem back on to Brussels). Moreover, Spain has a huge private debt burden that is twice that of Greece.

Although I have warned on these pages before that Spain’s austerity program was leading the country to disaster, my reaction to this economic catastrophe has been one of amazement. Just take a look at this employment data 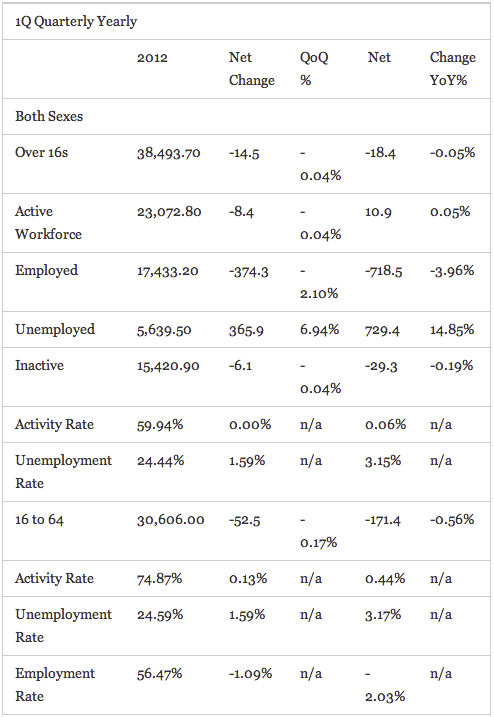 Yet, until now Rajoy Administration has been saying that the marginal decline in GDP estimated by the Bank of Spain for the first quarter was exaggerating economic weakness. Now we have the spectacle of the Spanish government suggesting that the Bank of Spain estimate of a .4% decline in Q1 Spanish GDP is too pessimistic. But in light of these numbers, what kind of GDP decline should one realistically expect when employment falls two percent non annualized in a quarter? At least a four percent annualized decline. more likely much higher. Yet who is talking discussing that as a real possibility in Brussels? Nobody. Everybody remains asleep at the wheel.

For years, the Spanish GDP figures have been hard to square with the underlying collapse in industrial production and rise in unemployment, both of which were more realistically reflecting the scale of the country’s collapse into depression.

When I said a few months ago that the Spanish government was lying about their numbers, I was attacked by a few Spanish readers of this blog, who claimed I was a nefarious hedge fund manager, likely loaded up to the gills with CDSs on Spanish debt who was trying to foment panic. For the record, I have never bought a credit default swap in my life. If anything, I was trying to foment panic because I was horrified by the new ultra austerity stance adopted by the recently elected Rajoy Administration.

Now consider the reality: the economy is crashing, hence the unemployment rate rise. Yet German Chancellor Angela Merkel and the ECB President, Mario Draghi, continue to insist that one can have both fiscal restriction and a lower domestic price level despite the fact that Spain has a non financial private debt to GDP ratio of 230%.

Interestingly enough, Dutch levels of private debt to GDP are even higher, at 249%, the highest in Europe. By contrast, the Italians still have net household savings. So who are the real “profligates” in Europe?.

Those who embrace these ruinous austerity policies will soon be seeing the experiencing much the same kinds of conditions as the Spanish (albeit from less depressed levels) including the moralistic Dutch, whose finance minister has been a crusader in favour of even harsher fiscal rules than those embodied in the Stability and Growth Pact.We have also recently witnessed a big surprise decline in the German consumer confidence index last week as well as a collapse in an Italian retailing sentiment index. The austerity disease is intensifying the crisis, even in the core.

It is inconceivable to me that Super Mario Draghi won’t be changing his tune soon, in spite of what he and the Merkel government are now saying for public consumption. To continue with this present course will not only precipitate a collapse of the euro, but a political collapse across Europe.

There is no question that larger deficits are needed to support aggregate demand at desired levels. However, as all of us who have contributed to this blog have long noted, the problem is the national governments are currently like US states and as such are revenue constrained because they are USERS, rather than ISSUERS of the currency (as opposed to, say, Canada or the US, both of which are sovereign issuers of their own currency).

So relaxing the deficit limits without some kind of ECB funding guarantees can cause markets to abstain from funding the national governments, which creates a solvency crisis of the kind we are experiencing today. Said another way, without the ECB the euro members are currently deep into ‘Ponzi’, as my friend, Warren Mosler has described it. In reality, they have all been in ‘Ponzi” since day one. But it took a crisis of the magnitude of 2008 to make this manifest for the markets.

At some level, the ECB understands that, as it always”writes the cheque” when a systemic crisis pushes the system to the brink. It can be no other way, as it is the sole issuer of the euro. But for the most part, Europe’s policy making elites remain in denial, as they continue to turn away from the one entity that could address the insolvency issue.

And let’s be clear once and for all. The US government does not face the same kind of crisis as the Spanish, the Greeks, the Dutch or even the Germans. The US government has expanded its public debt ratio considerably in recent years but yields remain low and when the ratings agencies downgraded their assessment of the US sovereign debt the demand for it rose. Whither the so-called “bond market vigilantes”?

The Euro governments are in a different camp altogether. All those who actually understand that the member governments are using a foreign currency and thus are not at all like Japan, the US or the UK governments, appreciate that their is default risk attached to the paper issued from the EMU governments.

They also appreciate that with the non-elected eurocrats of Brussels insisting on a decade or more of austerity and implementing fiscal rules that these would ensure a crisis every time there has been a serious downturn in aggregate demand. And with that, the risk of default with government debt has risen. That is what we are seeing today across the euro zone. And in Spain it is writ large.

The mainstream austerity line is trapping Spain (as well, as Greece, Portugal, Italy, Ireland and soon the core of the euro zone) in a dangerous downward spiral of lost income and increased unemployment. I still think Francois Hollande’s likely election could well change the political dynamics in the euro zone, even though he generally buys into the mainstream neo-liberal euro line. Hollande is an “austerity lite” character, as opposed to being a genuine reflationist. But even he cannot be oblivious to the looming political and social dangers which await France, if he continues to pursue the policies embraced by the current President, Nicolas Sarkozy.

So far, Brussels has not let facts get in the way of a good neo-liberal theory, but it’s getting increasingly hard to ignore this emerging horror show.