The Obama victory was less than 24 hours old when the Rubinite faction of the Democratic party was out full bore selling “reforming” Social Security as the adult solution to the coming budget impasse, giving it higher priority than any other measure on the table while simultaneously admitting that this is not even a pressing (let alone real) problem.

And the worse is that this snakeoil salesmanship, which comes from former OMB director, now Citigrgoup vice chairman of corporate and investment banking Peter Orszag, is almost certainly an Obama trial balloon. It’s no secret that Obama has long viewed cutting, whoops, “reforming” Social Security and Medicare, as one of his fondest goals. He made that clear shortly before he was inaugurated, in a dinner with conservatives hosted by George Will. He even volunteered in the debates that he and Romney were on the same page as far as these programs were concerned. So it’s reasonable to view Orszag as fronting for the Administration.

Orszag’s Bloomberg piece is simply putrid. It starts out praising Obama for discipline during his campaign and insisting he need to show discipline on the budget front. But this is already a rhetorical bait and switch.

The first mention of discipline referred to the President’s team choosing to put in long hours to meet their objectives. By contrast, the discipline Orszag wants to see happen on the budget front is the sort you inflict on children, animals, and submissives in S&M (actually worse than that, since submissives at least get off on being hurt). But Obama is into that: “I want fiscal restraint and order.”

Now it’s outside the scope of this article to address long form, but we will stop to remind readers that the budget hysteria is completely, utterly misguided. The last thing this economy needs is austerity. You can look at Europe and see how fiscal retrenchment in economies with lots of idle resources has only made matters worse. The IMF has even admitted that math of budget cutting fails because GDP falls even more than the deficit is reduced, which results in the debt to GDP ratio getting larger (and that’s before you factor in longer-term damage due to skill and infrastructure erosion, suicides, deterioration in health, etc). But the neoliberal economists have the same sort of religious zeal as the neocons. Just as the neocons laid in wait since the 1980s before they were able to take us all on a wild, costly, and hugely destructive ride in the Middle East, this crowd of true believers (lead by billionaire Pete Peterson) has been similarly engaged in a long-term campaign and looks poised to unleash its own version of adventurism.

Even if you were to accept the wrongheaded premise that deficit cuts were necessary, the Orszag piece is disingenuous. Orszag claims the Administration has three options, no more, no less. That’s patently ridiculous, particularly since Orszag fails to mention spending cuts, in particular, defense-related. Yet polls show overwhelmingly that Americans put that on the top of their list of budget fixes. No, instead Orszag says Obama could go into the new year and let tax cuts expire or could make concessions on raising taxes on the rich. Orszag doesn’t even bother giving very convincing reasons for dismissing these possibilities. In fact, he undermines his case against going into January with his aside early on “No one was really punished for the debt limit debacle of 2011.” Correct. It made Mr. Market very unhappy for a while, but Mr. Market got over it, and the partisans blamed the other side.

The rest of his article argues for his option which has some bells and whistles, but boils down to: “”We can’t agree on anything else, so let’s go after Social Security and sort out the rest later.” And he admits this isn’t a solution to any real problem:

So the most promising approach may be to compromise on Social Security — even though it is not a significant driver of our long-term deficits.

He nevertheless presents this as a great deal, something the Democrats should “leap at,” as if the Republicans are in a position to inflict worse. Um, did Orszag not watch TV last night? Obama is still president and the Dems actually gained seats in the Senate. So how are those evil Republicans gonna force anything that does not kick in via running over the fiscal cliff (and Social Security does not get hit by that) without the cooperation of the Democrats? I honestly don’t know how Orszag can write something so ludicrous and expect anyone to swallow it.

This move would also spit in the face of the people who just put Obama into office, since in a reversal of his 2008 funding, which has Wall Street as his biggest donor group, the big money types were gunning hard against him. From FT Alphaville: 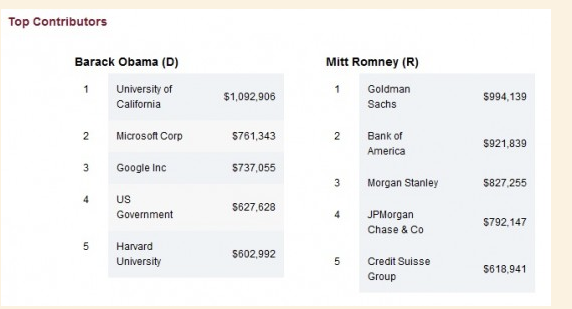 Gee, should Obama’s liberation from the clutches of financiers give him the opportunity to act on the wishes of voters? From DemocracyCorps (hat tip Suzie M):

While elites assume the fiscal cliff is about deficit reduction and avoiding a contraction in the economy, voters want progress to create jobs over the next five years. Voters want growth, not austerity, and above all, do not see ‘entitlements’ as on the table.

· Two-thirds give an intense positive response to a “plan to invest in new industries and rebuild the country and create jobs over the next five years.” That is 5 points higher than “a plan to dramatically reduce the deficit to allow the economy to grow over next five years.”

· By 67 to 26 percent, voters say the priority should be growth rather deficit reduction.

There is no evidence that voters have any interest in the contours of Simpson-Bowles approach to the budget.

· Over 60 percent rule out cuts in Medicare and Social Security as part of a deficit reduction package.

· Almost three-quarters find acceptable in any such plan creating a new higher rate for those earning over a million dollars.

By putting Paul Ryan on the budget, Republicans decided to put social insurance for seniors on the table, but the Obama’s biggest advantage over Romney was on whom voters trust to deal with Medicare: 51 to 38 percent, a 13-point advantage.

It would seem to be a stick in the eye to defy such clear voter wishes, but that’s never stopped Obama. And he will get away with it because large parts of his base even now don’t perceive that his talk and image don’t map at all onto his policies. This long-planned betrayal might finally wake them up to the actual policies, as opposed to the persona, that they voted for.