Yves here. Last week, we used a the latest release of an every-other-year report by Transparency International on corruption to discuss the need to come up with more granular descriptions of the many forms it takes. One of the interesting things about questionable wheel-greasing is the way it’s considered to be perfectly acceptable in some societies if there are enough steps inserted between the action and the payoff. Larry Summers goes to DE Shaw and gets paid a lot to do very little and then goes back to government. Think he wasn’t more kindly disposed to the entreaties of traders and folks in the hedge fund industry as a result? Social psychologists have found a gift as minor as a can of soda predisposes someone towards a sales pitch. Just imagine what a few million dollars does. And here underpaid public servants expect to cash in afterwards, which of course means they can’t take steps that would upset prospective employers or donors while they are in office.

Now those patterns are common examples of how things are done in the US. Other cultures have different norms. This post on a major bribery scandal in Spain will hopefully elicit reader comment on the common forms of corruption in the EU and how they’ve changed over time.

Curiously enough, Spain got one of the best scores of all the countries included in the Transparency survey as far as the amount of bribery in day-to-day life. Only 2% of the respondents reported having to pay a bribe in dealing with the government in eight different categories, versus 7% in the US and Switzerland, 5% in the UK and Italy, and 4% in Belgium. Of the countries surveyed, only Denmark, Japan, and Australia scored lower, all at 1%. Yet Spain also scored poorly on the perceived corruption of its political parties, with a 4.4 ranking on a scale of 5 (the US was 4.1). The way to square the circle, as this post explains, appears to be that the buckraking takes place at senior levels.

I’m curious to get reader input on ritualized, respectable corruption that takes place in various European countries. How does the presence of technocratic career bureaucrats (a virtually non-existant species in the US outside the State Department and the surveillance state) change the dynamic? Or do you think there’s actually a lot of Bárcenas-type behavior that goes on but tightly-knit elites are normally able to keep it hidden from prying public eyes?

By Don Quijones, a freelance writer and translator based in Barcelona, Spain, who write regularly at his blog, Raging Bull-Shit. Cross posted from Testosterone Pit

You know your country has serious problems when one of the world’s most respected and influential media organizations goes out of its way to find the least flattering photo of your national leader and then plasters it across the top of a news story.

That’s precisely what happened to Spain this week.

The media organization in question was the BBC. The article was about the political funding scandal currently gripping Spain, and the photo the BBC chose to feature showed Spain’s hapless leader Mariano Rajoy licking his lips. The image (see below) lent Rajoy something of the air of a viejo verde (dirty old man) and predictably spread like liquid wildfire across the social media in Spain, setting off a cacophony of calls for Rajoy to resign for the irreparable damage he’d done to Spain’s overseas image. 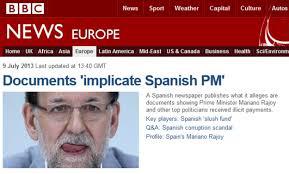 Rajoy’s troubles have been thrust back into the international spotlight by the imprisonment, a few weeks ago, of the man at the centre of the funding scandal, the PP’s former party treasurer Luis Bárcenas. Bárcenas is accused of taking bribes and evading taxes.

To date, the authorities have thus far located close to 50 million euros in undeclared bank accounts under Bárcenas’ name in Spain, Switzerland and the U.S. For now, it’s anyone’s guess how many hundreds of millions, or even billions, of euros might have greased the PP’s wheels during his tenure as party treasurer.

What is clear is that, through his position within the party hierarchy, Bárcenas was able to amass compromising data on pretty much all his colleagues. This is probably what kept him out of prison — at least until recently – as well as why having him in prison now is likely the worst possible nightmare for senior members of the PP.

It didn’t take long for Bárcenas to hit back at his former colleagues. Within days of his incarceration he gave an exclusive interview to El Mundo, the country’s biggest-selling conservative daily, in which he accused the PP of financing itself illegally for over 20 years. He also gave the paper original copies of the “Bárcenas papers,” the secret ledgers he kept in which he recorded donations from major builders, developers and other closely tied companies.

Many of these donations violated party funding legislation because they either went over the legal limit of 60,000 euros or were donated by companies with government contracts. The papers also show bonuses – either in the form of cash or luxury goods such as designer suits and boxes of vintage Cuban cigars – paid to high-ranking PP officials, including Rajoy and his predecessor José María Aznar, on top of their regular salaries.

The Kings of Corruption

Obviously Spain is not the only country in Europe to be cursed with a self-serving, corrupt political class. Indeed, nary a day goes by these days without some senior European public official or representative getting caught with his or her (though usually his) hands in the cookie jar.

In France Jerome Cahuzac, the trusted tax tsar and budget minister who had led Hollande’s crusade against fraudsters and tax-dodging millionaires, was recently discovered to have been hiding €600,000 (£509,000) from the taxman in a secret foreign account for 20 years.

Across the Channel, Tim Yeo, a former British minister and the chairman of a powerful parliamentary energy committee, was recently caught on camera glibly discussing how he could secretly help push private business in parliament for cash. And just in the last few days, Claude Juncker, the Prime Minister of Luxembourg and Europe’s longest serving head of government, had to resign after evidence surfaced that he had allowed illegal security agency activity such as phone-taps and corruption.

Clearly, the problem of political corruption on the Old Continent is as acute and endemic as ever. However, when it comes to the hubris and wretched excess of its political class, Spain is clearly in a league of its own (or at least in a league of few talents, accompanied no doubt by Italy and Greece).

On the question of hubris, I’d like you to imagine, if you would, how your own national government might respond if pretty much every senior minister was accused of tax evasion and/or accepting bribes. Would it stand down in a rare act of humility? Or perhaps set up an “independent” (ha!) public inquiry, as the British government is won’t to do whenever a scandal rears its ugly head? Perhaps it would call new elections, so as to give the voting public a say on the country’s future direction. What it’s least likely to do is what Rajoy’s government has done — namely, to deny all charges against it, despite mounting evidence to the contrary, and cling on to its power and privilege as if its life depended on it, with complete disregard of public opinion.

The Man Who Wasn’t There

Perhaps worst of all, as the Bárcenas scandal has escalated, Rajoy, the nation’s supposed “leader”, has gone AWOL. Since Bárcenas’ imprisonment, he has spoken neither in parliament nor in public about the allegations.

In fact, when all the opposition parties recently tabled a motion in parliament calling for a one-off session of prime minister’s questions, the Popular Party used its absolute majority in the house to block the vote. Rajoy’s colleagues would clearly rather let silence speak volumes than their own party leader.

And with good reason. After all, the last time he tried to defend himself and his party in public, while standing shoulder to shoulder with his paymaster-in-chief Angela Merkel, Rajoy flummoxed the journalists gathered – not to mention the millions of listeners and viewers who tuned in around the world – with the following line of reasoning: “Everything that has been said about me and my colleagues in the party is untrue, except for some things that have been published by some media outlets.“

And that, dear reader, is the perfect summation of why Spain is in such a sorry state of decline. Not only is its political leadership one of the most openly dishonest, corrupt, hubristic and unpopular in Europe today, it is also arguably the most incompetent (and let’s face it, that’s saying something!).

Instead of devoting their admittedly limited capacities to the service of their country and its electorate, Rajoy and his cohort of ministers are in a perpetual state of damage limitation mode, desperately trying to cover their tracks and destroy all incriminating evidence against them before Bárcenas spills more of his beans.

But now, following El Mundo’s publication today of text messages between Rajoy and Bárcenas that show once and for all that the Spanish prime minister has been knowingly lying to the electorate, it’s almost certainly too late.

The show cannot go on much longer, for there is simply too much at stake. Lest we forget, Spain, like its equally dysfunctional Mediterranean neighbour Italy, is almost certainly both too-big-to-fail and too-big-to-bail. As such, it represents one of the greatest threats to the continued existence of the euro and the political union it’s meant to support.

So, while Rajoy and his government might have thought, at least until recently, that they could comfortably cling on to their political careers as well as their parliamentary majority for another three years, the “markets” may well have other ideas.