Yves here. As Pilkington’s post makes clear, the loanble funds theory, which is the foundation of the Fed’s failed stimulus policies, refuses to die.

Pilkington gives one refutation in his post from the Bank of England, but let me give a layperson’s version from a 2012 post:

Bernanke is also a firm believer in the discredited “loanable funds” view, that if you make put money on sale by making interest rates low and credit readily available, businesses will take advantage of it and borrow and invest. But that’s just silly. The cost of money is a secondary consideration in investing. The primary one is: will there be enough buyers for your output and will they pay what you need to charge to make the project work?

I do need to add one qualification: there is one type of business where the cost of money is a huge consideration in whether or not to invest: levered financial speculation. So it should not be surprising that the one concrete effect of money on sale is booming asset prices.

And here is one of many shreddings of the loanable funds theory from a Respectable Economist, in this case Servass Storm:

Mario Seccareccia’s note last week did a great job of showing how the Summers/Krugman “liquidity trap” argument is just the old Wicksellian loanable funds market, which has acquired something like the status of a folk theorem in economics. “Within this neoclassical theoretical box”, the note states, “there is only one solution to move the economy out of secular stagnation. One must boost the Wicksellian “natural rate” by strengthening expectations of return.” This could be done, as the note argues and following Wicksellian logic, by a policy of negative real interest rates (amounting to a fiscal subsidy on borrowing) which might do the job of triggering an asset bubble.

What the note does not state so clearly, however, is that Wicksell assumed that the loanable funds market operates in a situation of full employment, i.e. income would be at the full employment level. The (natural) interest rate would then balance savings supply and investment demand, only affecting the composition (but not the level) of full-employment income. Keynes argued, of course, that it was possible for investment and saving to be equal at any level of income, which implies that the equilibrium rate of interest might be consistent with any amount of unemployment. Applying Wicksell’s loanable funds model in a blatantly non-full employment context, as Krugman and Summers are doing, is – therefore – a red herring, distracting attention from the real issue, which is: unemployment due to lack of demand.

Now to Pilkington’s effort to put this economic zombie to rest.

The Rethinking Economics conference in New York took place over the weekend. Anyway, Paul Krugman was on a panel with James Galbraith and Willem Buiter. The panel was interesting in and of itself. But what really caught my eye was when Krugman was confronted by an audience member on his support of NAIRU, the loanable funds theory and the theory of the natural rate of interest.

The audience member who asked this question was Rohan Grey, a friend of mine who runs the Modern Money Network who helped co-organise the event. You can see the question and the response in this video clip.

I don’t really want to get into the question of NAIRU too much as this would take us too far off track. But the other two questions provoked an interesting response from Krugman. First of all, he simply asserted that the loanable funds was true. Then he went on to assert that the natural rate of interest was true. “Clearly,” he said, “there is always some rate of interest that would produce more or less full employment”.

Let’s take each one first. Because Krugman is wrong on both counts. In his textbook co-written with Robin Wells, Krugman outlines the loanable funds theory in the form of the money multiplier. In the video linked to above he alludes to the fact that this may break down in what he calls a ‘liquidity trap’ but that in normal times it is nevertheless true. This is simply false (Krugman has also misunderstood the concept of the liquidity trap but that is a story for another day). The Bank of England released a paper earlier this year which stated crystal clearly that this misrepresented how money is created.

The reality of how money is created today differs from the description found in some economics textbooks:

• Rather than banks receiving deposits when households save and then lending them out, bank lending creates deposits.

• In normal times, the central bank does not fix the amount of money in circulation, nor is central bank money ‘multiplied up’ into more loans and deposits. (p1)

If that is not a clear enough refutation of the loanable funds theory, here is another:

The vast majority of money held by the public takes the form of bank deposits. But where the stock of bank deposits comes from is often misunderstood. One common misconception is that banks act simply as intermediaries, lending out the deposits that savers place with them. In this view deposits are typically ‘created’ by the saving decisions of households, and banks then ‘lend out’ those existing deposits to borrowers, for example to companies looking to finance investment or individuals wanting to purchase houses. (p2 — My Emphasis)

When I raised this point on this blog before Krugman did a blog post the next day saying that the Bank of England paper said nothing that he did not already know. In the same blog post alluded to James Tobin’s work on money creation.

If Tobin actually did make the case for endogenous money, and I am not entirely convinced of this, but if he did then he overturned the loanable funds theory. If Krugman states that he adheres to the view put forth in the Bank of England paper which he claims he learned from Tobin then why does he continue to endorse the loanable funds theory when asked about it? The two views are mutually exclusive and the Bank of England makes this clear in no uncertain terms.

The fact of the matter is that Krugman is self-contradictory on this point. And self-contradiction is the surest sign that one is simply incorrect or has not thought through a particular point on any great amount of detail.

Now, how about the idea that “there is always some rate of interest that will lead to more or less full employment”. This idea is grounded in the notion that there is a mechanical relationship between investment and the rate of interest. But anyone who has read Keynes — especially Chapter 11 of the General Theory — knows that this is not the case. Rather investment is driven primarily by the expectations of investors. The rate of interest plays an entirely secondary role — if it plays a role at all given that most studies have shown that businessmen do not think about the interest rate when they make investment decisions.

Tied to this last point, mainstream economists have now recognised that monetary policy actually works through some rather odd channels; its effects are not felt through the investment channel as such. So, even reading the recent literature on monetary policy from some mainstream economists makes clear that it does not work through the investment channel as is laid out in the ISLM model that Krugman constantly endorses.

But let us be less abstract and bring this discussion down to earth. What would likely happen if the rate of interest went substantially negative? Would investment and thus employment really increase? I don’t think that it would. Far more likely that, in a closed economy, money would flee safe assets as liquidity preference fell and would rush into riskier assets. This might just fuel a speculative credit bubble.

In an open economy money would probably partially run into the speculative financial markets and partially flee the country. This latter tendency would drive down the currency. Given that we must already assume some inflation since we are talking about negative real interest rates this could lead to a hyperinflationary collapse. 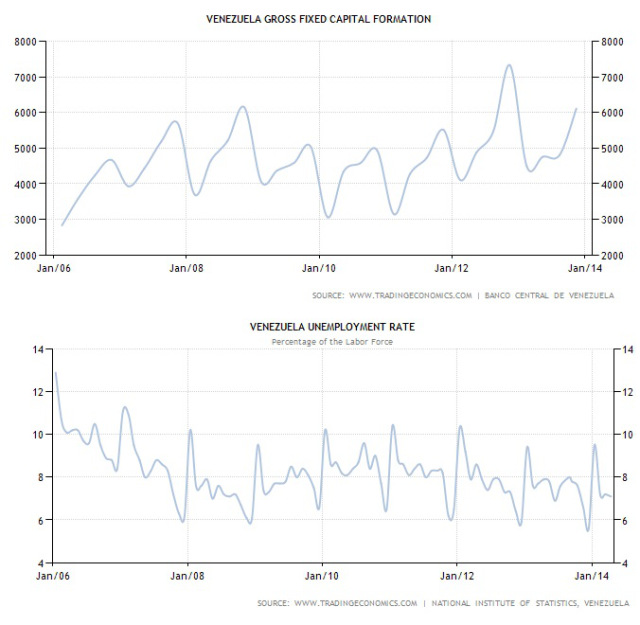 Substantial negative real interest rates of around -20% to -30% were brought into effect in the second quarter of 2013. But the upswing in investment you see in the above chart occurred prior to this in the final quarter of 2012. There is absolutely no evidence that significant negative real interest rates have increased real investment or driven unemployment down in Venezuela. All they have done is led to massive bubbles in the financial and housing markets and to an enormous attempt by capital to flee the country which is reflected in the black market rate for dollars soaring. If there were not strict capital controls in place there is no doubt that Venezuela would be experiencing hyperinflation today.

What does this mean for policy in the advanced economies? If central banks in these countries were able to generate real negative interest rates — and I have outlined how they might do this before (Krugman says that it is impossible… wrong) — it is likely that this would simply generate stock and housing bubbles. Real investment and unemployment would probably not be much affected. But when the bubbles eventually collapsed this would likely have negative effects on both.

Krugman’s monetary theory is almost entirely wrong. He flip-flops on the loanable funds question and he is simply wrong on the question of a natural rate of interest. He also holds to an incorrect view of what a liquidity trap is that he picked up from John Hicks. While it is extraordinarily unlikely that he will give up on these ideas — he has dug in far too much now to concede these points and he seems unwilling to even openly debate them — I only hope that his errors will help to ensure that others do not make the same mistakes.