The Scottish Independence Vote went like this: 45% voted “Yes” to Independence; 55% “No”. The Union continues. Turnout was a splendid 84%. Scottish Nationalist Party leader Alex Salmond resigned.

The snap analysis is straightforward: according to Tory pundit Lord Ashcroft’s instant survey, it’s the oldies wot won it: 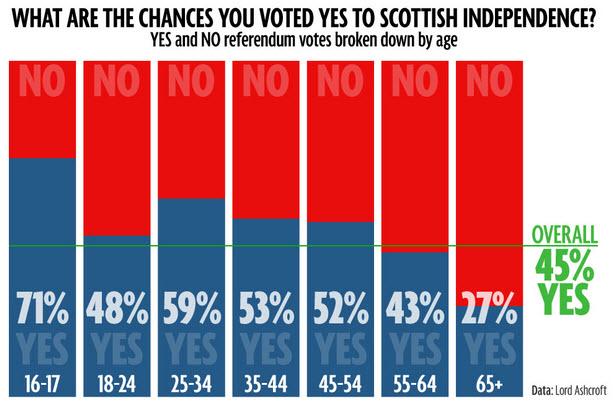 The younger voters have no sterling-denominated pensions, nor sterling-denominated mortgages yet, so one would expect them to be more cautious when the next vote comes around. Constrained to pick a single main reason for their “No” vote from a shortlist, 47% of voters in Lord Ashcroft’s sample chose “The risks of becoming independent looked too great when it came to things like the currency, EU membership, the economy, jobs and prices”. Not just the oldies, then: 47% of all the “No” voters sampled didn’t like the risk.

On the other hand, an optimistic SNP leader, looking at the age profile in that picture, would conclude that, if a persuasive solution to the currency, banking and trade issues can be found at all, full independence is only a matter of time.

*UPDATE* Sunday morning from comments: what I warned was an instant poll turns out to have exactly the type of snag to be expected from that sort of exercise, except worse:  “The overall sample was large – 2047 – but this included only 17 in the age group 16/17. The conclusion that young people are overwhelmingly pro-independence is not supported by the evidence”. OTOH I also see Salmond this morning saying that independence is “only a matter of time”! Better-designed polling will settle doubts about the accuracy of the youth vote analysis, I hope.

Mind you, that future leader would have to be poised to combat some pretty determined pushback by propagandists for the future “No” camp. In the Ashcroft sample, 9% of “No” voters made their minds up in the final week before the vote, and a further 10% in the last month. It’s therefore entirely conceivable that the last minute barrage of stories about the SNP’s currency and banking policies had quite an effect. In that case, this particular £10,000 bonus looks well spent: 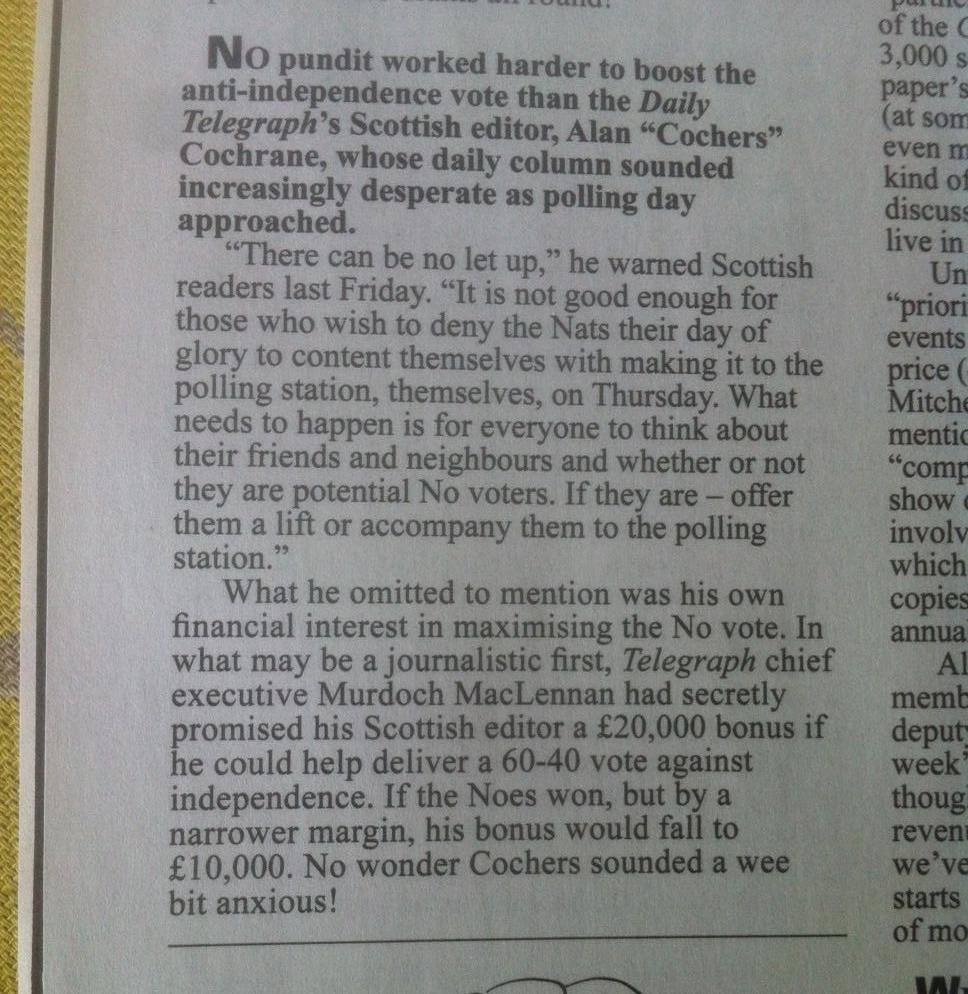 The Telegraph did not stick very rigidly to the economist/technocrat/central banker line on the genuine deficiencies in the SNP’s case. The Telegraph liked FUD. “Good to see the Daily Telegraph playing it completely straight all the way to the end”, remarked another Tweeter, contemplating this set of stories from the Tele web site: 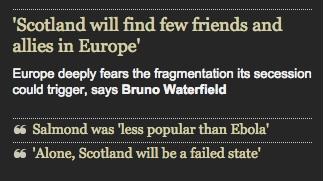 Done in by scare stories or let down by their own economics, the SNP will get another shot in the not-too-distant future. In the mean time, they have given a big and well-deserved fright to a complacent Westminster:

The extraordinary story of how the dream of Scottish independence – long nurtured by a third or fewer Scots – suddenly turned into an existential threat to one of the world’s premier powers is a lesson for leaders everywhere of the danger of taking voters for granted.

The aftermath of the vote will soon affect the rest of the UK greatly, as outlined by the very bracing Frances Coppola, who, on the “status quo” apparently endorsed by the “No” vote, is, ahem, much more illuminating than I was in my last post:

This “No” vote was certainly not a vote for the status quo. In the last days of the campaign the UK government promised further devolution for Scotland and protection for its current level of fiscal transfers (the so-called Barnett formula). The rest of the UK, notably the leadership of the Welsh assembly, reacted with some anger to this. Scotland currently receives more under the Barnett formula than Wales, which was particularly badly affected by the destruction of the UK’s mining industry in the 1980s and 90s and remains depressed with high levels of unemployment to this day. And the promise of further devolution raised hackles in England, where the fact that Scottish MPs can vote on English affairs but English MPs can’t vote on Scottish affairs (the so-called “West Lothian question“) rankles. Bribing the Scots to remain in the union opened a sizeable can of worms in the rest of the UK.

And now the worms have escaped from the can. Even before the Scots cast their votes, people were discussing the possibility of creating an English parliament and reforming the Barnett formula. And as the Scots made their decision, the UK Prime Minister announced:

“Just as the people of Scotland will have more power over their affairs, so it follows that the people of England, Wales and Northern Ireland should also have a bigger say in theirs.”

It seems the UK is already drifting towards fundamental constitutional reform.

But devolution for the whole UK – the creation of a community of “member states” – will not be easy. Further devolution for Scotland, Wales and Northern Ireland, and even reforming the Barnett formula, is child’s play compared with the problems that England poses. England is far larger than any other state in the union, and it is deeply divided: the prosperous London and South East dominate it both economically and politically, and there are sizeable pockets of poverty and depression in the regions that were formerly industrial powerhouses. Trickle-down economics has never trickled down far enough in England. The Labour party, which would face virtual annihilation in an English parliament, supports the creation of self-sufficient regional assemblies within England – an idea which has been tried before but unfortunately failed to gain much traction with English voters. The Conservative party, predictably, likes the idea of an English parliament. And equally predictably, large local authorities such as Yorkshire and cities such as Manchester want to run their own affairs. This is a political minefield and certainly not something that can be addressed before the 2015 general election.

Via Frances Coppola’s neat summary, so much for the continuing effects of the Scottish vote.

Let’s now return to Scotland to dig into a less-visible story, by way of a thing called the Scottish Index of Multiple Deprivation, which you can read about here:

The Scottish Index of Multiple Deprivation (SIMD) is the Scottish Government’s official tool for identifying those places in Scotland suffering from deprivation. It incorporates several different aspects of deprivation, combining them into a single index. It divides Scotland into 6,505 small areas, called datazones, each containing around 350 households. The Index provides a relative ranking for each datazone, from 1 (most deprived) to 6,505 (least deprived). By identifying small areas where there are concentrations of multiple deprivation, the SIMD can be used to target policies and resources at the places with greatest need.

Helpfully, the SIMD people bulk those 6,505 small areas back up into the 33 council areas of Scotland. I combined the resulting data with the Independence Vote returns by council area, and performed a very simple Euclidean-distance-based cluster analysis. The clusters are pretty darned obvious without machine help, in fact. The result is this chart, which you can click to make more legible, with the two clusters of council areas identified in different colours: 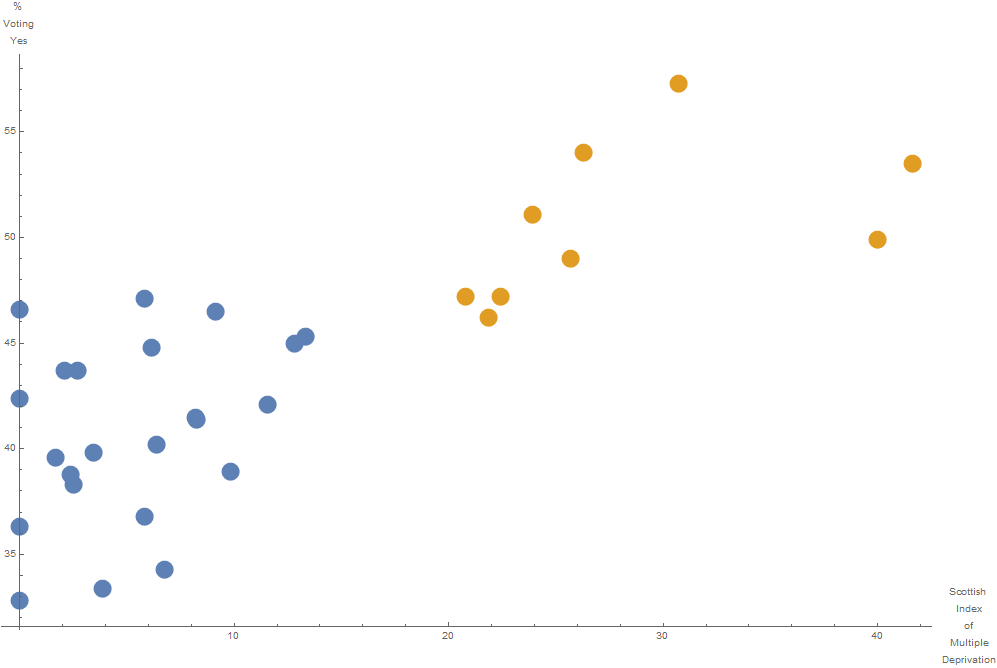 That’s 1.13 million Scots, a quarter of the voters, who live in or near the not-so-wonderful side of Scotland. Not-so-wonderful? Here’s a glimpse of the very bottom of the barrel:

There are ghosts sitting in the Cottage bar in Glasgow’s Calton area. The locals call them the missing generation, the men who died before their time. Sometimes the drinkers dip their heads or lift their pints to them. They may not see them but all the drinkers know they are there. Jimmy, Swifty, Davy and many more.

For here in this multi-deprived inner city area, the average life expectancy of a male is just 53.9 years. In Iraq, after 10 years of sanctions, a war and a continuing conflict, suicide bombs and insurgency, the average man has a good chance of making it into his 60s; the life expectancy of a male there is 67.49. In Iran it is 69.96, in North Korea, 71.37 and in the Gaza Strip it is 70.5.

Statistics recently revealed that the Calton ward has not just the lowest life expectancy in the United Kingdom and Europe but of many areas of the world. A child born in the Calton – locals always prefix a “the” to Calton – arrives into an environment saturated by drink, drugs, smoking and poor diet. A baby girl has more of a chance of survival – her life expectancy at birth is 74.8.

In the Calton, according to statistics compiled by NHS Health Scotland, 26% of the population say their health is not good and 52% smoke, compared with 25% of Scotland’s average population. Alcohol abuse admissions to hospital are way above the national average. Also eating away at Calton’s life expectancy are cancer, heart attacks, diabetes, drug overdose and suicide. For here, deprivation bites into almost every home: 44% are on incapacity benefit, 37% live in a workless household and 30% of homes are occupied by a lone parent.

Where there’s a scandal, an opportunist can’t be far away:

Such startling figures were this week seized upon by the Conservative leader, David Cameron, at the launch of his party’s social justice policy. He attacked the chancellor, saying: “We desperately need new thinking if we’re to tackle the problems of multiple deprivation … We must realise that Gordon Brown’s ever-growing state cannot win the war on poverty on its own.

There’s a much bigger mashup of the SIMD here, with Google Maps, that includes a history of the SIMD level in each datazone since 2004. From that you can see that little has changed in the Deprivation Archipelago since 21st January 2006, the date of the future Prime Minister’s attack on Brown’s “ever-growing state”. David Cameron’s alternative has had no visible effect on the SIMD. I daresay life expectancy has got worse in the Gaza Strip lately: perhaps it has even sunk to Calton levels.

The Guardian’s most recent coverage of this issue was a year ago, so even the liberal rags aren’t that interested; but then, I suppose there are only so many times you can write this story:

A bigger scandal than Bill Walker’s behaviour was revealed last week and hardly a voice was raised in protest. According to the Office for National Statistics, Glasgow possesses the highest number of workless households in the UK.

This means that in parts of the city, children will reach adulthood never having seen a wage slip in the house or witnessed any member of their family head off to work at night or in the morning. In some of these neighbourhoods, almost nine out of 10 male adults are receiving benefits, and life expectancy can be up almost 20 years lower than in the city’s leafier arrondissements barely two miles away.

The reason they die much younger is attributed to the “Glasgow effect”, a handy phrase that is now often deployed to absolve the rest of us from any responsibility for such an iniquity.

The Glasgow effect hints that there is nothing much that can be done; it is just one of those social curiosities that come with living in this city. For it seems that life expectancy in UK cities with similar social indicators and patterns of deprivation is higher than in Glasgow. Thus the knife slayings, the heart disease, the cancer rates and the depression that create the Glasgow effect can be neatly boxed up and left for the next academic seeking to complete a doctoral thesis on the subject.

Well, it looks as if those morbidly-sick, concerned and patriotic folk turned out in numbers, voting with the same passion evident everywhere else, but predominantly for independence and Salmond, who, they thought, on little evidence but much hope, might make a difference. The turnout figures say they haven’t given up: rather, it appears that the rest of the UK that has given up on them. What a shame and a disgrace it is, to Scots and Britons alike, that people still live like that, with no end in sight.