Yves here. While readers may take issue with an economist who comes originally from the Troika, I’ve seen other credible analyses come to similar conclusions: that the structure of the Greek economy and its output mix means that it would not benefit anywhere near as much as one would expect from a large fall in the value of its currency.

Keep in mind that this post does not consider the other reasons for a Grexit. But as various readers have pointed out, Greece gets the same bargaining leverage from threatening to default (or actually defaulting) with much less collateral damage than it does via exiting the Eurozone (even if the rules allowed it, there is a fair bit of debate as to how, and even whether, that can happen from a legal standpoint).

By Guntram Wolff, Director of Bruegel and a member of the Solvay Brussels School’s international advisory board. Wolff was recently with the European Commission, where he worked on the macroeconomics of the euro area and the reform of euro area governance. Prior to joining the Commission, he was coordinating the research team on fiscal policy at Deutsche Bundesbank. He also worked as an adviser to the International Monetary Fund

The genie is out of the bottle: Europe is again discussing the possibility of Greece leaving the euro. With it, the debate has re-emerged whether this would be helpful or not for Greece and whether there would be contagion to other euro area countries. A big question is, of course, how the Greek financial system would survive an exit with a debt restructuring; how long it will take until Greece would regain access to financial markets; and how big the benefit of a debt restructuring is given the relatively low interest load. The absence of external help would be a further factor weighing on Greece. All these factors speak clearly against an exit from the point of view of Greece but they are not discussed in this blog.

In this blog, I want to focus on the claim that Greece needs to exit in order to devalue and in order to regain competitiveness so that it can grow again. This point has again been made prominently by Professor Hans-Werner Sinn of Ifo institute in Munich.

Greece stands out as an outlier in external adjustment. Its adjustment was almost exclusively driven by a contraction in imports

So what do the data tell us? Greece, Ireland, Portugal and Spain all had very significant adjustments of the current account since 2007 from high deficits to close to balance or surplus. However, the composition of the adjustment has been very different (see chart). In Ireland, Spain and Portugal, the largest part of the adjustment has come from an increase in exports. All three countries have therefore managed to change their production structures and substantially increase exports. This is a desirable and healthy way of adjusting, which also shows that it was not primarily a demand compression that drove the external adjustment in these three countries. Also in Italy, the increase in exports was larger than the decrease in imports.

Greece stands out as an outlier in external adjustment. Its adjustment was almost exclusively driven by a contraction in imports while exports have only very recently been positive.

Note: Nominal change in euros measures as percent of 2014 GDP.  The sign of the change in imports is inversed so that an increase in imports is shown as negatively affecting the current account. 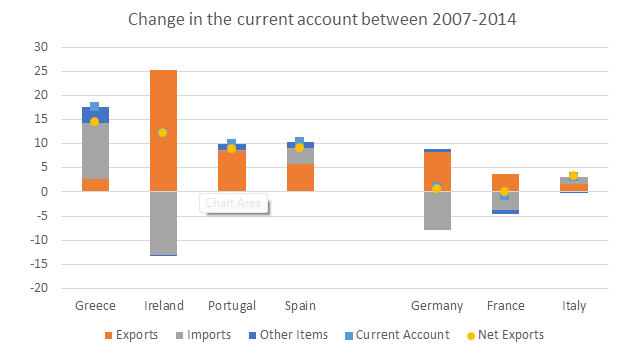 Are high wages the main problem in Greece hampering exports? Is the absence of a real depreciation the main driver of the different adjustment experience of Greece compared to the other euro area countries? The following two graphs show the simple wages measured in euros in the private sector. As we can see, hourly wages have come down substantially in Greece and are in fact the lowest in the euro area with the exception of Latvia and Lithuania. This contrasts with the experience in the other three countries adjusting, where hourly wages in the private sector have increased.

Note: For Germany, Ireland, Italy and Portugal Q1 2014 data is used instead of Q2 2014 since the latter is not available 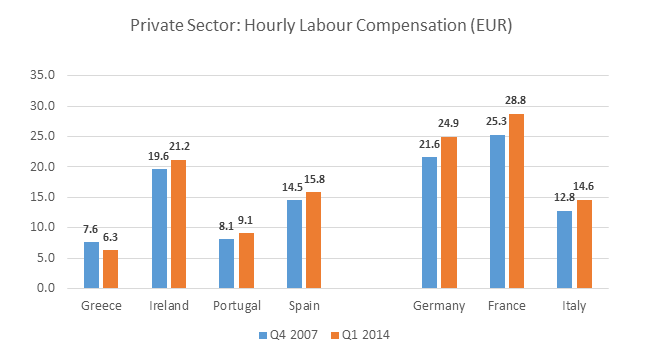 Correlating the change in exports with the change in wages in the private sector shows that Greece is an outlier as previously evidence by my colleague Zsolt Darvas. Despite a significant wage adjustment, exports have not picked up as they did in other countries.  The following scatter plot illustrates further that Greece is a clear outlier as are Lithuania and Slovakia. 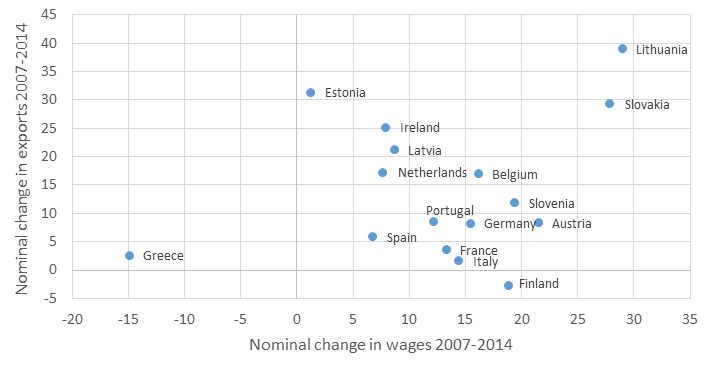 Overall, I conclude that the Greek economy would not benefit as much as hoped for from a rapid depreciation. The reasons for the weak Greek export performance might primarily lie in other factors such as rigid product markets, a political system preventing real change and guaranteeing the benefits of the few, the lack of meritocracy among other factors, as nicely outlined by Brookings scholar Pelagidis. To the extent that the Troika can help reform the country, an exit of Greece from the euro would even be counterproductive.

This does not mean that the current debt trajectory and debt level is sustainable. It may be necessary to further alleviate the debt burden on Greece, especially if inflation remains low and growth is weaker than the Troika believes. This has been done a number of times before by the official creditors and already now the average maturity on the European debt is 30 years. This maturity could be increased if necessary, effectively reducing the debt burden further and I could even see a nominal debt cut at some stage. An exit of Greece from the euro would not only create significant market turbulences, increase borrowing costs for Greek business and society and create geopolitical instability. But this blog demonstrates that it is unlikely to easily help the economy much as exports do not react much to changes in wage costs due to the sclerotic economy.