We’re having two posts on the Greek elections tonight, since the media accounts are so slanted as to merit discussion. The notion that a democratically elected government would put broad social interest over continued, self-destructive sacrifices to financiers and their allies in European governments is so threatening that a large swathe of media outlets seem almost to take visceral offense at the idea. Editors and writers are thus serving as vocal enforcers of keeping the Overton Window locked in its present, far right position.

What the “fuck” does the BBC coverage of the Greek election think it is doing and what bloody Orwellian-double speak western world am I living in?

Before you think one’s language inappropriate please consider this. In its coverage of the momentous events presently taking place in Greece, our bloody wonderful, alleged impartial, BCC reporters are calling Syriza “the radical left Party”. You heard it here folks, Syriza, that 40 years ago would have been to the right of the then UK’s Labour Party, is now a “radical left” organisation, with all the undertones that go with the word “radical.”

Having read quite a lot of Yanis Varoufakis’s output over the past 12 months, I’d hardly call Yanis a radical, nor for that matter would I call Mr. Tsipras radical for those of you who would like to contrast the Syriza election promises with the 1983 Labour Party manifesto that Michael Foot went to the country with, and which Roy Hattersley, who with Neil Kinnock, started the rot to infect that once proud leftwing organisation, referred too as the “longest suicide note ever written. By the way, in 1983 the actual left of the Labour Party wanted our country outside of the then EEC, they wanted to rid our nation of nuclear weapons and turn back the clock on four years of huge social upheaval caused by Thatcher and her monetarist economic prescriptions, what we call today “neoliberalism”.

Whilst I’ve yet to reach 50, in my humble opinion as someone who embodies many principles of the actual left, Syriza is not hot bed of radicalism, and yet the Uk media, much of the European media and obviously your US media are making out that Syriza are a threat not only to Europe, but no doubt the world – which I actually only hope is right, for at long last it seems people are awakening and coming out of the shadows to see the world for what it is and those legacy parties, be they left or right, for what they are. Corporate whores no less.

Needless to say, the BBC is not alone in trying to depict Syriza as extremist: 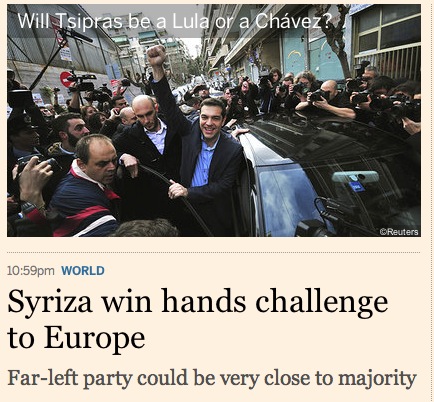 It is also important to remember that the effort to depict neoliberalism as centrist and traditional social democratic positions as radical reflects the weight of money, and is at odds with the weight of popular opinion. As Richard Kline pointed out:

Let’s dispense with several basic misconceptions regarding why progressives are presently so unsuccessful.

“Progressive goals are not popular.” Even with the systematically distorted polling data of the present, this is demonstrably untrue. Inexpensive health care, progressive taxation, educational scholarship funding, curtailment of foreign wars, environmental protection among others never fail to command majority support. It is difficult to think of a major progressive policy which commands less than a plurality. This situation is one reason for the lazy reliance upon electioneering by progressives, they know that their issues are popular, in principle at least. Rather childishly, they just want a show of hands then, as if that is what goes on really in elections.

One of Kline’s big messages is that why American progressives are so ineffective is that they see their cause as moral and just, and want to win converts. They are, for the most part, deeply uncomfortable with power. Per Kline: ” Thus, they don’t frame what they engage in as a fight but rather as a debate.” His view is that the times progressives have been effective is when they are teamed up with radicals, which are groups with real economic or social grievances.

So one reason for the overwrought reaction to Syriza is that a group that on the surface is merely progressive, in terms of its goals, may (stress may) be prepared to behave like radicals (in terms of their actions) precisely due to the humanitarian crisis that the Troika has inflicted on Greece. It’s remarkable that European technocrats didn’t anticipate that grinding down a population would lead to a broad-based, democratic pushback, and they seem genuinely surprised that Syriza has gotten this far, even in the face of heavy-handed efforts to scare Greek voters.

Bill Black provides a deep dive into the US version of the anti-Syriza messaging, and how it ties into a Washington Consensus crafted heavily by the likes of Pete Peterson. And the real danger in Europe, at least to the hyperventilating members of the elites, is that the Syriza success has increased the popularity of anti-austerity parties in the rest of Europe.

By Bill Black, the author of The Best Way to Rob a Bank is to Own One and an associate professor of economics and law at the University of Missouri-Kansas City. Originally published at New Economic Perspectives

The Wall Street Journal and the New York Time’s eurozone reporters, who share the same unshakable devotion to TINA and austerity as the Murdochized WSJ news staff have been thrown into a panic by Syriza’s electoral successes in Greece.

Both papers are freaked out, as are the Germans, about the potential for Greece to spark a wave of rejections of the troika’s infliction of austerity in a manner similar to how the infliction of self-destructive austerity programs pursuant to the Washington Consensus’ demands led to the “lost decade” and the democratic election of what is now over a dozen Latin American candidates running on anti-austerity platforms. The Washington Consensus was drafted and named by an economist at Pete Peterson’s International Institute. Peterson is a Wall Street billionaire whose mission is causing debt and deficit hysteria and plugging the joys of austerity and unraveling the safety nets. His greatest goal is privatizing Social Security – producing hundreds of billions in additional fees for Wall Street.

The NYT predicted that:

A Syriza victory would lift the hopes of euroskeptic parties elsewhere in Europe, especially in Spain, where the left-leaning, anti-austerity Podemos party, not yet a year old, is already drawing 20 percent support in national opinion polls. The leader of Podemos, Pablo Iglesias, joined Mr. Tsipras this week during Syriza’s final campaign rally.

The WSJ makes a similar point to explain the significance of Syriza’s electoral success.

A Syriza victory would also be closely watched by other antiausterity parties in Europe—on the left and the right—that have been gaining ground in the past year. In Europe-wide parliamentary elections last spring, voters fed up with years of cutbacks, rising unemployment and a shrinking social state, strongly backed new and fringe antiestablishment parties such as France’s National Front and Spain’s newly created Podemos party in a reaction to Europe’s old guard.

The NYT responded by citing quoting as its one non-partisan economic commentator on Syriza’s win – a Peterson institute economist! Yes, the people that crafted the Washington Consensus and claimed U.S. fiscal stimulus would produce hyper-inflation and who praised Germany’s austerity policies were presented by the NYT as the impartial experts on austerity – with no explanation of any of this history.

“[Alexis Tsipras, Syriza’s leader] is campaigning on change and the end of austerity,” said Jacob Funk Kirkegaard, a senior fellow at the Peterson Institute for International Economics in Washington, who argues that Mr. Tsipras must move toward a more centrist stance if he hopes to revive the economy and keep Greece solvent.

“If he can pull that off, that will be the best possible outcome for Greece and for Europe, because it would show that these protest movements ultimately recognize reality, which is that they are in the euro, and they have to play by the rules,” he added.”

The NYT did not bother to explain what the Peterson economist meant by the phrase “they have to play by the rules.” He means that Greece must continue to follow draconian austerity under the eurozone’s oxymoronic “Stability and Growth Pact” that has caused massive instability and crippled growth because it requires the economic malpractice of responding to a Great Recession by forcing Greece, Spain, and Italy into Great Depressions.

As I have explained many times, Greece’s current Great Depression is more severe and long-lasting than its Great Depression 80 years ago. Under the plan the troika successfully extorted prior Greek leaders to adopt he will be forced to further tighten the austerity screws for at least another five years. When the Peterson economist says that he hopes Tsipras “move[s] toward a more centrist stance” he means he hopes Tsirpras betrays all of his campaign promises and adopts austerity.

The NYT Thinks its Redemptive for Poor Greeks to Suffer

But it gets better, for Peterson’s economist says that if Syriza betrays the promises it made to the people of Greece and instead embraces austerity it will “revive the economy and keep Greece solvent.” Austerity has forced Greece into a Great Depression – the opposite of “reviv[ing] the economy.” A sovereign government is not a corporation and doesn’t (and can’t) use GAAP accounting. It is not “insolvent” because it has debts. It that is the definition, then austerity has not and will not make Greece “solvent.”

The Peterson economist then ends on an even worse note. He implicitly defines “reality” as requiring brutal austerity. He excludes fiscal stimulus, even though – as Paul Krugman (and many folks like us have tried to explain for many years – the great majority of economists think responding to a Great Recession with austerity constitutes economic malpractice.

The NYT also throws in its near constant meme that the Greeks aren’t mature and ready to “sacrifice” enough to get better. They still believe in the medical myth that you need to bleed a patient to help him recover. Embracing austerity constitutes pointless masochism that delays rather than speeds recovery from a Great Recession – suffering inflicted primarily on the poor and the sick, but the NYT loves to blame poor Greeks.

Continuing economic weakness has stirred a populist backlash as more voters grow fed up with policies that demand sacrifice.

Opposing austerity is not immoral, weak, or “populist.” It is good economics and humane – a win-win.

The WSJ doesn’t need one of Peterson’s economists to match the NYT’s mendacity. In the midst of a purported news story (not an opinion piece) the WSJ states the following as if it were undisputed fact.

Since first seeking a bailout in 2010, Greece has undertaken a broad sweep of economic overhauls and cutbacks that have helped mend its public finances and nudged the economy back to growth following six years of deep recession. Those cutbacks have come at a cost: Some 25% of Greeks remain jobless, while a quarter of households live close to the poverty line.

It is a clumsy attempt at mendacity given that the facts in the second sentence render risible the fiction foisted in the first sentence. Austerity has not “nudged the economy back to growth following six years of deep recession.” Austerity threw an economy in a deep recession into a gratuitous Great Depression. But for austerity, Greece could have begun a robust recovery four years ago.

There are at the time I write this two WSJ articles about the Greek election and the second one also has a clunker that is unintentionally hilarious.

And if Syriza refuses to meet those terms: Will Merkel blink?

No. German leaders fear that funding a Greece that refuses to reform would be the death knell of the eurozone. Other debtor countries could conclude that they could blackmail Berlin, refuse to cut their deficits or overhaul their economies, and still get German taxpayers’ money.