Nothing like the smell of deflation in the morning…

The realization that the fall in oil prices isn’t all to the good finally seems to have dawned on Mr. Market. Bloomberg has taken advantage of its new format option to cluster the grim news of the day: 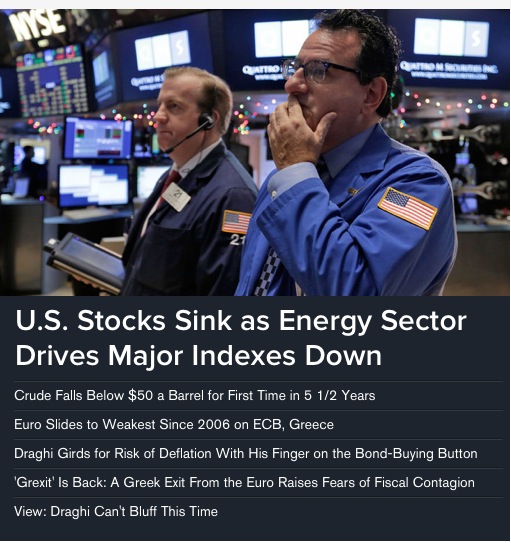 As Bloomberg points out, part of the reason for the further slide in oil is a run to the security of the dollar in the face of heightened Grexit worries:

West Texas Intermediate oil dropped below $50 a barrel for the first time since April 2009 as surging supply signaled that the global glut that drove crude into a bear market will persist.

WTI slid as much as 5.2 percent in New York. Brent fell below $55 in London for the first time since May 2009. Russia’s output rose to a post-Soviet high while Iraq, the second-largest producer in OPEC, plans to boost crude exports to a record this month. The price drop accelerated as the dollar climbed against the euro amid investor concern Greece might leave the currency union.

A warm winter in the US has made the consumption side worse than expected. And as we’ve written before, the US shale gas producers have to keep pumping to service debt. They can’t turn off the supply spigot. But many have credit lines that are due for renewal in March. I am also told that that is when many of their price hedges expire. So that is likely when we will see serious cutbacks. Based on the initial (optimistic) Wall Street forecasts that oil prices would rise in the second half of 2016, it appears that analysts assumed a 6 month lag between supply adjustment and oil prices firming up. If that is correct, it’s probably no sooner than third quarter before we see a meaningful recovery in oil prices. And if the warm winter continues and the Eurozone hits the shoals, who knows how long it takes.

From the Wall Street Journal story, U.S. Stocks Tumble Along With Oil Prices:

Though stocks began the first Monday of 2015 with a modest decline, the losses piled up as oil prices plumbed new lows, with beleaguered shares of energy companies leading the push lower. U.S. oil prices fell below $50 a barrel for the first time in nearly six years Monday, sending shares of S&P 500 energy companies tumbling nearly 4%.

“It seems like everyone is taking a step back instead of running into the new year,” said Viren Chandrasoma, managing director of equity trading at Credit Suisse . “There hasn’t been a real buying-on-the-dip mentality today.”

Though the decline in oil prices has led to lower gasoline prices and boosted the fortunes of ordinary consumers, it has also curbed profits for the once-booming energy sector, which has grown in recent years to be a bigger piece of the U.S. economy amid resurgent domestic oil production.

The S&P is now down a mere 1.81%. Wonder if anyone will try pushing it more closer to the close.

The moves came after U.S. oil futures briefly dipped below $50 per barrel in New York trading. The euro also hit a nine-year low against the dollar and the Stoxx Europe 600 index closed lower by 2.2%, amid fresh uncertainty over Greek elections that some worry could pave the way for the country’s exit from the eurozone.