Yves here. If you’ve read The Men Who Stare at Goats, you already know that the defense establishment has a peculiar fondness for funding quackery. But this is still a doozy.

The latest release from the Pentagon in the psywar against Russia is a declassified report claiming to have penetrated the brain of President Vladimir Putin, while he was in utero.

The release appears to be from the same research group whose secret exploration of Ronald Reagan’s brain was leaked to Gary Trudeau in October 1980, in the last weeks of the US presidential election when the incumbent Jimmy Carter was defeated by Reagan. The Pentagon reporting also acknowledges as a source of its expertise one of the creators of an American television series which was produced and broadcast by Rupert Murdoch’s 20th Century Fox between 2009 and 2011.

A Time Magazine interview of Putin as the “Person of the Year” for 2007 is revealed as the cover for a Pentagon-directed operation using special cameras to record Putin’s micro-muscular movements and verbalizations over several hours. Also exposed in the newly released papers is the covert engagement of Harvard University academic Timothy Colton, who was commissioned by the Pentagon’s top secret operation BODY LEADS to deploy at the annual Valdai Discussion Club between Russian offiicals and international academics and journalists. Colton’s Pentagon assignment at Valdai was to gather and interpret secret body and vocalization data on Putin, as well as on former president Dmitry Medvedev.

The television series, according to Fox, stars “Dr Cal Lightman, a deception expert whose uncanny ability to read facial expressions and body language makes him a virtual human polygraph.” Dr Brenda Connors, the uncanny expert on Putin’s brain for the Office of National Assessment (ONA) at the US Department of Defense, has produced a decade of secret reports, one in 2005 analyzing Putin’s “micro-facial expressions…and emotional baseline”; at least two in 2008; one in 2010; and at least one more in 2011. Two of the Connors reports, one from 2008 and one from 2011, were released last week, reportedly in response to a Freedom of Information Act (FOIA) request from USA Today and from Politico, a small circulation, free distribution paper and website based near Washington, specializing in American politics.

USA Today claims it first learned of Connors’s research and the Pentagon’s Operation BODY LEADS in March 2014, but the Pentagon refused to say anything to confirm the details. At the time, the Pentagon spokesman claimed the reports hadn’t reached the desk of the Defense Secretary.

Politico has reported that it has so far been unable to verify how much money has been spent by the Office of Net Assessment (ONA) on the Connors research and on Operation BODY LEADS. Politico claims that since 2009 experts whom Connors hired outside the Pentagon, like Colton, have cost at least $365,000.

ONA, a unit reporting to the US Secretary of Defense, has been headed since its inception in 1974 by Andrew Marshall. Aged 93, he was reported last year as about to retire. A Foreign Policy magazine profile claimed ONA’s budget was between $5 million and $10 million, annually. Marshall, the magazine reported, ought to retire because “he hasn’t had a new idea since the 1970s.”. The Washington Post claimed ONA has been budgeted to receive $10 million per annum. “Few places, however, are tougher to scrutinize. Many of Marshall’s studies and reports are classified. And he has to share them with only one man: the secretary of defense. Which reports actually get read, and which ones end up in history’s top-secret dustbin, is everybody else’s guess.” The Economist reported a month ago, when Marshall officially retired, that ONA is getting $19 million. Because Marshall never speaks to the press, and almost nothing has ever been released from its reports, The Economist asked whether Marshall’s brain (below) is classified.

Beneficiaries of Marshall’s commissions and payments are kinder. According to Edward Luttwak, “to have worked with him more than once over the years has been a privilege, for Andrew Marshall’s talent as a strategic thinker is as legendary as his unique longevity in office.” Whether it was Marshall’s friends or his enemies who arranged for the press leaks and then the FOIA release of the Connors reports isn’t known.

The 17-page report from January 2008 announces several discoveries about the connection between Putin’s brain and his head, his ears, and his fingers: “Putin’s brain wiring,” reported Connors, “is latent where (the nervous system links to the head and face to enervate his) typical social engagement behaviours emerge… [Putin’s] inner ear vestibular canals…may not be hooked up… Putin lacks distal initiation seen in how when he holds a pen, his fingertips do not fully touch the pen.” These data are then summed to the conclusion by Connors and her team that Putin is stuck “at the reptilian stage of development where order proceeds [sic] all interaction.”

A report by Connors, dated April 2010 and titled “Dmitrii Medvedev: A Study in Political Leadership and Decision-making Style”, concluded about Medvedev that “since adolescence he has exhibited a physical armouring or disunity which inhibits harmonious movement”. Medvedev tries to overcome this disability — according to Connors, with help from Prof Colton — when his “body from time to time speaks to a well of suppressed anger that could find outlet in bad-cop behaviour”.

By the time Connors drafted a fresh report between January and April 2011 she had been promoted at the Pentagon to naval warfare as “Chief of Naval Operations Strategic Studies Group.” The 40-page paper now released concludes that Medvedev suffers from the same neural disconnection diagnosis President Lyndon Johnson gave of Vice President Gerald Ford — that he couldn’t fart and chew gum at the same time. Johnson believed Ford’s problem (below left) came from brain damage as an adolescent – “too much time playing football without a helmet”, Johnson said. The Medvedev diagnosis (right) expressed by Connors is that his “ability to move about in an integrated way relative to space is low.” 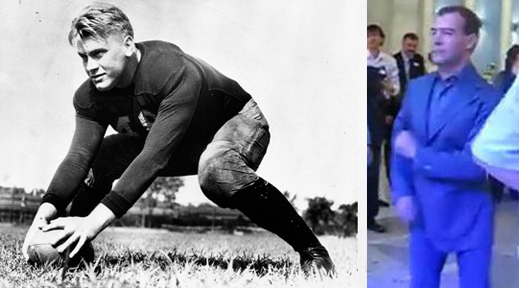 Here is the TV series (below, left) before its credibility in the ratings killed it. Click on the Connors reports here. Read Time Magazine’s account of Putin’s “brain abnormalities” as the US reporters secretly taped him for the Pentagon – “in our hours together he didn’t attempt a joke”. Not so secret agent Colton’s (below right) résumé at the Valdai Discussion Club reveals that he stopped reporting there in 2012. 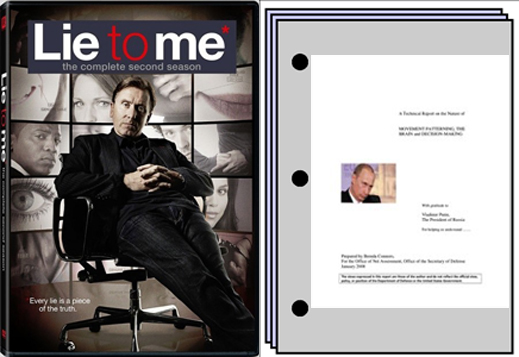 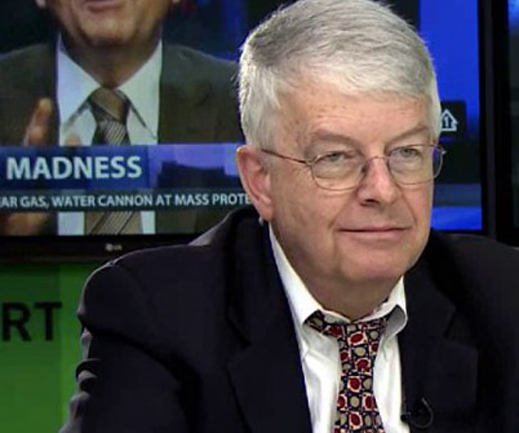 In the reports released so far, Connors’s most significant political prediction was that as the Russian presidential election of 2012 approached, “each [then Prime Minister Putin, President Medvedev] will retain his present institutional role”.

In October 1980 Trudeau didn’t hazard a forecast for the outcome of the election. But his neurological discovery has proved demonstrably more accurate; this was that Reagan’s brain was… empty. 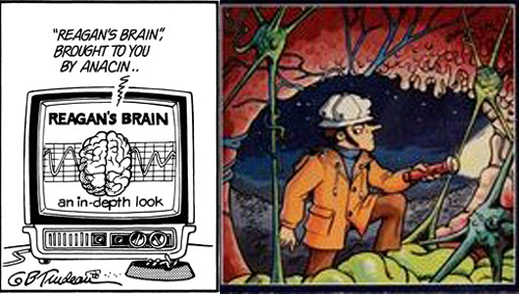 The secret was that Reagan was the victim of Alzheimer’s Disease while he was still in office, almost fifteen years before he was officially diagnosed with the malady in 1994; that was five years after he completed his second term and left office. Trudeau’s report was later confirmed publicly by Reagan’s son Ron Junior, who said he thought his father’s dementia commenced while he was president, as early as 1984, then definitively by 1986.

Concealment of presidential disabilities wasn’t new with Reagan. President Woodrow Wilson’s third and terminal stroke was concealed between 1919 and 1921. President Franklin Roosevelt’s polio-disabled legs were hidden for his three terms, 1933 to 1945; and President Bill Clinton’s lower organ displacement was, well, exposed in secret before it (the news) leaked publicly in 1998.

Trudeau’s original scan of Reagan’s brain was published in a handful of US newspapers undeterred by pressure from the Reagan campaign and its Republican Party supporters. In 1987 – long after Ron Junior guessed that his father was afflicted — Trudeau did a follow-up study. This revealed that the research team investigating Reagan’s brain had suffered casualties itself — the first when Reagan had a single thought. 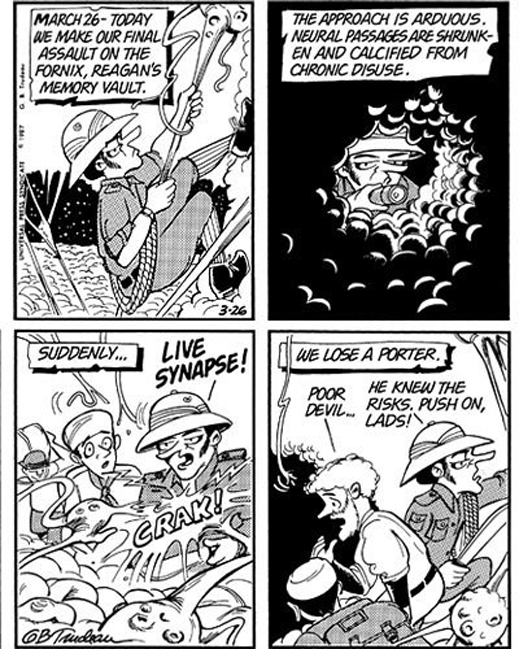 Then the research team leader was killed when Reagan attempted to hold two contradictory thoughts in his mind at the same time. 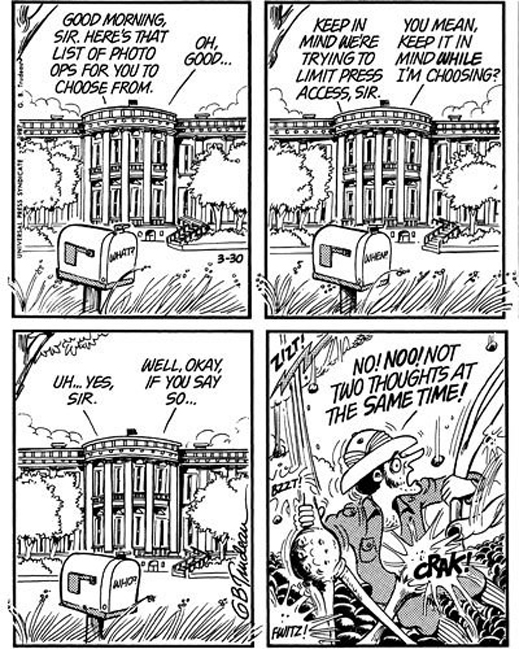 According to this week’s release from the Pentagon, Connors admits she did not have access to scans of Putin’s brain, and had to settle for videotapes from the Time Magazine crew. Notwithstanding, she produced a diagnosis of “profound behavioural challenge identified by leading neuroscientists as Asperger’s Syndrome, an autistic disorder which affects all of his decisions.” In Putin’s case, Connors claims to have detected a “loss of immediacy of action” in the right arm and right leg “likely [to have] occurred as an interuterine injury.” In general psychiatry and neurology, Asperger’s Syndrome is reported as a type of brain disorder which allows normal linguistic and cognitive functioning, but causes physical clumsiness such as inadequate judo skills, and lack of sympathy with others, especially American journalists. 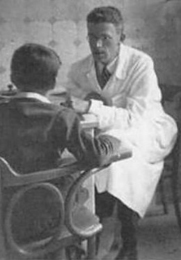 The condition is named after one of the first clinicians to describe it; that was paediatrician Hans Asperger (right) in Vienna in 1944, after he returned from the German Army in the Balkans, and after his brother was killed at Stalingrad. There is academic speculation that the German Army had something to do with the motor disabilities Asperger recorded in his young patients. Earlier reports of similar symptoms had appeared in 1926 in the Russian psychiatric literature when they were called “schizoid personality disorder.”

According to the Connors report, Putin’s symptoms were triggered when his mother had a stroke whilst pregnant with him in 1952.

A former colleague of Connors at the US Naval War College (NWC) reports this week in a US intelligence community website: “I was at the Naval War College from 2005 to 2014, and got to see some of Ms. Connors’ special genius at work, and let me state that what’s still behind the classification wall is more risible than even this. Allow me to also state that I don’t actually know if Putin has autism — and neither does Connors. Her credentials for making such an assessment are literally nonexistent. She has a BA and MA in political science and a background in — wait for it — interpretive dance. She was a protocol officer at the State Department and somehow wangled her way into lucrative research (i.e. non-teaching) faculty positions at the Naval War College; all this was a subject of some mystery to NWC faculty, but given that institution’s tendency to give out jobs to unqualified “special friends,” the Connors case isn’t really that much of an outlier. Connors has been at NWC for over a decade… doing whatever it is she does.”

Connors reveals a serious brain abnormality of her own. She cannot tell the difference between the words “its” – the possessive form of the neuter pronoun “it” – and “it’s”, the verbal contraction of “it is.” A similar confusion between nouns and verbs appears when Connors tries writing the plural “observers”, and instead prints “observer’s”. Her grip on temporality and the forward and backward functions in space are revealed by her spelling of “precedes” by “proceeds”. Psychiatrists and neurologists expert in diagnosing the condition of the brain from semantic, syntactic and spelling clues differ in their findings. They report that Connors may be suffering from schizoid personality disorder, manifesting in ideokinetic apraxia. That’s caused by a lesion in the supramarginal gyrus of the cerebral cortex. A bump on the head can do it.