In a bit of synchronicity, two new papers confirm the long-held suspicion that Wall Street is sucking the life out of Main Street.

The BIS has released an important paper, embedded at the end of this post, which has created quite a stir, even leading the orthodoxy-touting Economist to take note. Titled, Why does financial
sector growth crowd out real economic growth?, its analysis of why too much finance is a bad thing is robust and compelling. This article is a follow up to a 2012 paper by the same authors, Stephen Cecchetti and Enisse Kharroubi, which found that when finance sectors exceeded a certain size, specifically when private sector debt topped 100% of GDP or when financial services industry professions were more than 3.9% of the work force, it became a drag on growth. Notice that this finding alone is damning as far as policy in the US is concerned, where cheaper debt, deregulation, more access to financial markets, and “financial deepening” are all seen as virtuous.

The paper is short and accessible, so I strongly encourage you to read it in full.

The paper starts by looking empirically at the fact that larger financial sectors are correlated with lower growth rates: 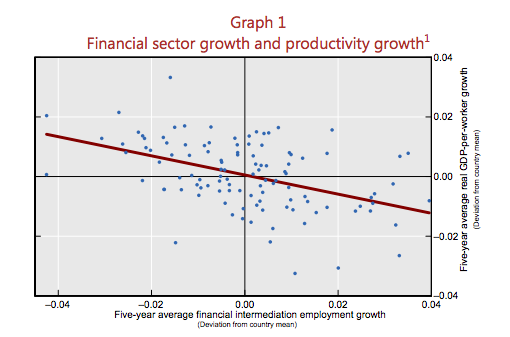 And the big reason is one that is no surprise to anyone in the US, that finance has been sucking “talent,” as in the best and brightest from a large range of disciplines, ranging from mathematicians, physicists, the best MBAs (which remember could be running manufacturing operations or in high-growth real economy businesses) and lawyers. The banking sector’s gain is Main Street’s loss. From the abstract:

In this paper we examine the negative relationship between the rate of growth of the financial sector and the rate of growth of total factor productivity. We begin by showing that by disproportionately benefiting high collateral/low productivity projects, an exogenous increase in finance reduces total factor productivity growth. Then, in a model with skilled workers and endogenous financial sector growth, we establish the possibility of multiple equilibria. In the equilibrium where skilled labour works in finance, the financial sector grows more quickly at the expense of the real economy. We go on to show that consistent with this theory, financial growth disproportionately harms financially dependent and R&D-intensive industries.

And how does this come about? One big reason is that financial firms like to lend, and to lend against collateral rather than business earnings. That drives lending to collateral-intensive activities, most of all real estate, which is not all that productive from a societal perspective:

And the access to funding then drives where resources go:

And remember, even though the authors blandly mention “the bargaining power of financiers” the model does not include the further distortion seen in many advanced economies, of laundering subsidies to the housing sector through housing finance or tax breaks.

And they test their model against real economy outcomes:

Here we focus on manufacturing industries and find that industries that are in competition for resources with finance are particularly damaged by financial booms. Specifically, we find that manufacturing sectors that are either R&D-intensive or dependent on external finance suffer
disproportionate reductions in productivity growth when finance booms. That is, we confirm the results
in the model: by draining resources from the real economy, financial sector growth becomes a drag on
real growth.

The impact is large:

We find unambiguous evidence for very large effects of financial booms on industries that either have significant external financing needs or are R&D-intensive. We report estimates that imply that a highly R&D-intensive industry located in a country with a rapidly growing financial system will experience productivity growth of something like 2 percentage points per year less than an industry that is not very R&D-intensive located in a country with a slow-growing financial system.

Brad DeLong, earlier this week, flagged another important article on why finance has become a productivity drain by Thomas Philippon, titled Finance vs. Wal-Mart: Why are Financial Services so Expensive?

Despite the financial services industry having so much bigger and supposedly more efficient firms, the cost of financial intermediation is higher than in 1910. How is that possible? Is it all the new and improved looting? It’s even simpler. It’s Keynes’ capital markets as a casino problem:

…the current financial system does not seem better at transferring funds from savers to borrowers than the financial system of 1910. The role of the finance industry is to produce, trade and settle financial contracts that can be used to pool funds, share risks, transfer resources, produce information and provide incentives. Financial intermediaries are compensated for providing these services. Total compensation of financial intermediaries (profits, wages, salary and bonuses) as a fraction of GDP is at an all-time high, around 9% of GDP. What does society get in return? Or, in other words, what does the finance industry produce? I measure the output of the finance industry by looking at all issuances of bonds, loans, stocks (IPOs, SEOs), as well as liquidity services to firms and households. Measured output of the financial sector is indeed higher than it has been in much of the past. But, unlike the income earned by the sector, it is not unprecedentedly high. Historically, the unit cost of intermediation has been somewhere between 1.3% and 2.3% of assets. However, this unit cost has been trending upward since 1970 and is now significantly higher than in the past. In other words, the finance industry of 1900 was just as able as the finance industry of 2010 to produce loans, bonds and stocks, and it was certainly doing it more cheaply. This is counter-intuitive, to say the least. How is it possible for today’s finance industry not to be significantly more efficient than the finance industry of John Pierpont Morgan?… Technological improvements in finance have mostly been used to increase secondary market activities, i.e., trading. Trading activities are many times larger than at any time in previous history. Trading costs have decreased, but I find no evidence that increased liquidity has led to better (i.e., more informative) prices or to more insurance

This is another damning finding from a policy perspective, in that the bias of regulations has been strongly toward promoting more market liquidity. Readers may recall that we’ve been skeptical of that premise for years, noting that in the stone ages of our youth, investors were not terribly bothered by limited liquidity in large and important markets like corporate bonds. Yet the SEC and the Fed have been all in with the “more liquidity is better” program, with the SEC pushing for lower and lower transaction charges (which has the perverse effect of leading financial services firms as trading counterparties to be fleeced rather than good customers to be nutured) and promoting high frequency trading, and the Fed allowing derivatives to grow like kudzu, out of the belief (among other things) that they would facilitate price discovery in cash markets.

And of course, an overly costly financial services sector on a raw transaction level again drains resources from other sectors.

As the Tax Justice Network noted,

…an oversized large financial sector is not the Golden Goose providing benefits for all, but a cuckoo in the nest, crowding out and harming other sectors and society. Winston Churchill summarised:

“I would rather see finance less proud and industry more content.”