President Vladimir Putin has lost the war. Not the one with Washington for the future of Europe, eastern Ukraine, and the Kremlin itself. That war isn’t going so badly for Putin. The one he is losing is with the Russian oligarchs on whether they will repatriate their assets from their offshore havens, subject themselves to genuine auditors, and pay Russian tax.

Putin conceded defeat, a powerful international banker believes, when the president announced late last month that he accepts the establishment of Russian trusts to hold assets and income onshore and offshore without liability to pay domestic tax. According to Putin on March 25, “this is an innovation in our legislation, which before we didn’t have.”

“Russian capital,” the banker says, “has been saying from the beginning of the conflict in Ukraine that it wants Putin to abandon his deoffshorization plan. It’s going to succeed because the sanctions imposed since the conflict began have cut off the regular supply of capital to Russia. Capital isn’t patriotic, at least not in Russia. Putin is obliged to pretend he can persuade the oligarchs to act in the country’s interest. But he’s pretending. The proposed new law on trusts shows it.”

The proposal to legislate for the Russian version of Common Law, English-type independent trusts was put to Putin explicitly last October by the Russian Union of Industrialists and Entrepreneurs (RUIE, Russian acronym RSPP). It ran into opposition at the Finance Ministry. On December 19, when Putin hosted Christmas carols for the oligarchs (pictured below), Finance Minister Anton Siluanov wasn’t assigned a place. For more on who sat where and what was sung, read this. 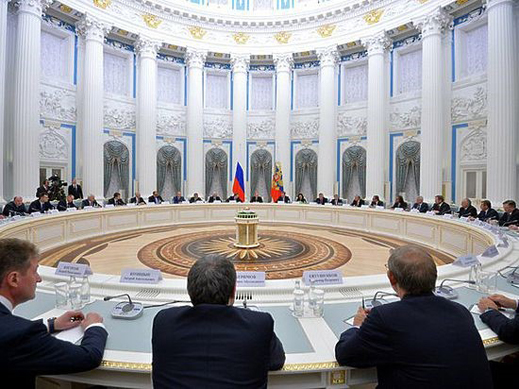 Three months later, Putin didn’t mention trusts during his speech to the RUIE convention on March 19.

Putin did say he was prepared to be flexible on how much time would be given the oligarchs to meet the deoffshorization deadlines. “The law on controlled foreign companies,” Putin said, “has come into effect and it says owners have to disclose information regarding their foreign assets by April 1 this year. Obviously, many of those who wish to comply with the law cannot meet this deadline for a number of reasons. Therefore, I agree with those who say we have to extend the deadline for submission of notifications on participation in foreign organisations. For how long – that’s a separate matter. However, here I agree that this needs to be synchronised with the coming into effect of the law on capital amnesty.”

Six days later, on March 25, Putin had made up his mind to accept the creation of trusts. Minister Siluanov (below left) was assigned the job of spelling out what had been agreed. The Kremlin transcript of their exchange at a session of government ministers isn’t reproduced on the English version of the new Kremlin website. It is available in Russian.

“A. SILUANOV: We introduce the concept of an irrevocable trust, it is a question of exemption from tax on retained earnings for a settlor, in administration of a trust, who does not have the right of disposal, and will not participate in the preparation of the related assets upon liquidation of the trust. This was also one of the suggestions that was made by business [RUIE]. We propose to consider it in the amendments to the legislation on controlled foreign companies…We intend to make these proposals to the State Duma… as amendments to the existing law. We have too for support the passage of the relevant changes.

“VLADIMIR PUTIN: And we create more organizations which in the Russian legislation are not provided for – that’s trusts?

“VLADIMIR PUTIN: Including the so-called irrevocable trust, when a citizen transfers his property, in fact, as if to a management company and from that moment ceases to be the owner of the property. But the management company carries out its activities under the statute, which was created with its formation.

“VLADIMIR PUTIN: Practically, this is an innovation in our legislation, which before we did not have?

“A. SILUANOV: Yes. The concept of an irrevocable trust we didn’t have. We want to make this innovation as an amendment to the bill in the current legislation on controlled foreign companies.

“VLADIMIR PUTIN: We believe that everything that colleagues have said now will be in part, but still a serious part to create a favorable climate of economic activity in our jurisdiction, for forming of which there is a need to talk a lot.” 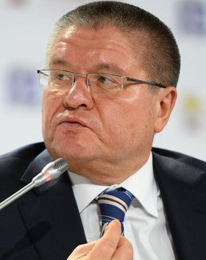 For the Moscow business media Alexei Ulyukaev, Minister of Economic Development, immediately echoed the president’s remark, announcing: “If we say that our jurisdiction should be attractive for business, [for] citizens, that jurisdiction should include different legal structures. This is the first thing. And secondly, the coordination of the law on controlled foreign companies and the fact of the capital amnesty in the bill on the declaration of assets and funds of citizens.” Note that the reporters to whom Ulyukaev spoke understood him to be endorsing the new legislation on trusts for attracting domestic investment. But Ulyukaev didn’t exactly say so.

The new law on controlled foreign companies (CFCs) to which Putin, Siluanov and Ulyukaev were referring was enacted on November 24. It is Federal Law № 376-FZ “On amending Parts I and II of the Russian Federation Tax Code (in respect of taxation of the profits of controlled foreign companies).” Its effective date was January 1 of this year. Putin’s remarks on extending the contemplated deadlines, without setting new dates, means that in practice the law is not in effect, yet.

The Finance Ministry’s draft law on capital disclosure and amnesty for individuals was released publicly on March 27. Here it is.

What this meant on November 24 last year, and from January 1 this year, is no longer clear — and not for the practical reason that the president has extended the statutory reporting deadline of April 1 – so far indefinitely. By proposing to legalize trusts the definitions of CFCs and of beneficial ownership of assets have been transformed, along with the practical effects of disclosure and repatriation of assets and income.

What disclosure is required for the new trusts, and can Russian tax be levied on them at either the 13% or 20% rate? – the questions were put this week to First Deputy Prime Minister Igor Shuvalov, who is in overall charge of financial policy; Minister Siluanov; and the chairman of the State Duma Committee on Budget and Taxes, Andrei Makarov (below, right). 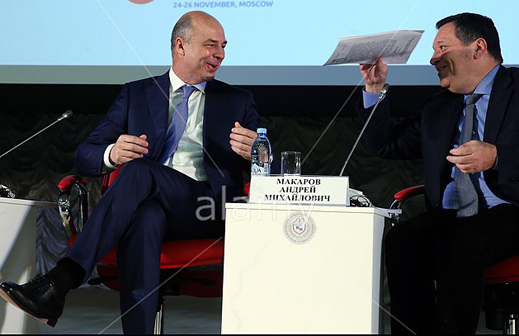 Makarov said through a spokesman he was too busy to answer the questions. The tax policy spokesman for the Communist Party in the Duma, Victor Kolomeitsev, was also unwilling to answer.

Shuvalov and Siluanov refuse to address the loophole issue. Through his spokesman, Siluanov promised to do that later. The proposed law on trusts isn’t ready yet, he said. “The draft amendments to the law on controlled foreign companies are being worked out now. In the future, according to Russian legislation, it will be published for public comment on the portal for posting information about the development of the federal bodies of executive power of draft regulations and the results of public discussion.”

Alexander Zakharov, a Moscow lawyer and tax specialist at Paragon Advice Group, says he believes that Putin’s decision will make it legal for Russians to establish trusts to shield assets and income from Russian tax if the beneficiaries and trustees of the trusts act in good faith. He is sceptical they will. 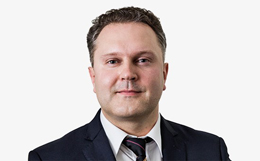 Zakharov (right) published his assessment of Russian trusts in an essay for RBK a month ago. It can be read in full here. He believes that legalization of trusts is a good thing, as it will bring Russian legal practice into line with the rest of the world. However, he is doubtful that the Russian tax authorities will have the will or the means to investigate the arms-length requirements of trusts offshore. He also suspects they will go beyond the law in pursuing trustees of trusts established on Russian territory.“In principle, establishing trusts allows you to bypass many of the provisions of this [CFC] business law.”

Preventing abuses of the trust mechanism will be difficult. “The new rules will work effectively only if the [Russian] tax authority will be able to prove in court Russian control a foreign entity [company or trust], the fact of its management from the territory of Russia, or its fictitious nature for the purposes of [tax] agreements. It’s premature to talk about this, as long as there is the practice of receiving information from abroad on request, and this requires a series of complicated formalities. Besides, the foreign authority may reject the [Russian tax authority] request. The first obligatory exchange of tax information, in accordance with the Convention on Mutual Administrative Assistance in tax matters, is scheduled for Russia on for 2018. Finally, the most difficult barriers to Russian law enforcers arise when it comes to trusts and foundations. To recognize the control of a foreign trust or a foundation, it is necessary to request the necessary documents in a local court and in compliance with all local formalities. And this isn’t easy.”

According to Zakharov, Russian trusts will be “a paradise for the anonymous.”