Yves here. Conventional wisdom for some time has been that weakness in oil prices would be short-lived, with prices rallying in the second half (and arguably, the current rally representing the financial markets correctly anticipating a much improved supply/demand picture soon).

Goldman breaks with this consensus, arguing that prices will fall again as drilling will pick up again quickly. Their argument is similar to that of John Dizard, who at the outset of the oil price swoon, said it would not be over until the US shale players ran out of financial rope and money for oil plays became more scarce and costly.

By James Stafford, editor of OilPrice. Originally published at OilPrice

Oil prices have rebounded with surprising speed in recent weeks, with WTI prices bouncing by more than a third from March lows.

There are good reasons for this. Rig counts are down by nearly 1,000 (or nearly 60 percent) since hitting a high in October 2014. Spending on some of the world’s largest projects has been cut by a combined $129 billion, a figure that could balloon to $200 billion by 2016. The spending and drilling contraction is finally leading to some small production declines.

The downturn in activity sparked optimistic sentiment among oil traders that the markets have adjusted, and could be on their way back up. 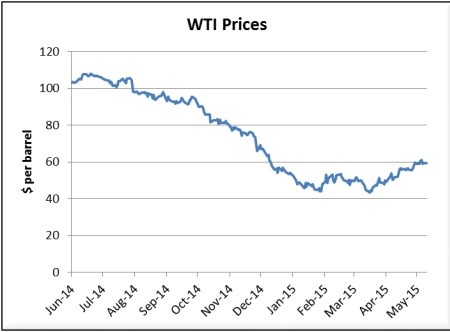 Not so fast, says Goldman Sachs. The investment bank argues in a new report that not only is the oil rally a bit premature, but that the rally itself will be “self-defeating.” The rally could bring drillers back, but that would merely contribute to a reversal in price gains. More drilling and more production worsen the glut that has not yet been resolved, and prices could be in for a double dip (or triple dip if you count the price declines from February to March 2015).

The Goldman Sachs report says that the problem is not just from a surplus of crude, but also a surplus of capital. Access to cheap finance has allowed production companies to stay in the game and continue to drill new wells. Even companies that have seen their cash flows dry up or have run into liquidity problems have still been able to find investors willing to pony up fresh capital.

For example, in January and February, the world’s largest oil companies issued $31 billion of new debt, the highest quarterly total on record. Part of the reason for new debt is the need to raise capital – in other words, it is evidence of distress. But new debt was only made possible by the ultra-low interest rate environment. The Federal Reserve has kept interest rates low for many years, hoping to stimulate the economy. But that also has investors struggling to find yield, inducing more risk taking. With safer assets not offering the returns that investors are looking for, large levels of investment and lending are being funneled into oil companies, including some that are in precarious financial positions.

With a financial lifeline in hand, many companies that would have otherwise cut back more drastically are instead kept alive. Some may even begin drilling again. But the recent rise in oil prices is predicated on the fact that a real, authentic balancing is underway. In short, the only way prices stay in the $60 per barrel range, or even rise above that level, is if global oil production is materially reduced. That hasn’t yet happened in a significant way, and if output rebounds because of higher prices, the glut will not be resolved.

Goldman Sachs thinks the pieces are in place for another decline in oil prices, perhaps as low as $45 per barrel by October. “We find that the global market imbalances are in fact not solved and believe that the rally will prove self-defeating as it undermines the nascent rebalancing,” Goldman analysts wrote in an investor’s note.

If another round of price declines set in, the oil industry will be forced to make fresh cuts to their drilling fleets, spending programs, and workforces. These swings in prices, and the fortunes of oil companies, will continue until a much more lasting reduction in supplies is realized. In short, as we discussed in a previous article, a much more robust shake out probably needs to take place, with weaker drillers forced out and more production taken offline. That could still be several months away.