I once had the opportunity to speak one-on-one with one of our leading progressive politicians, someone who is on the right side of everything I care about, including climate change. As we were discussing solutions to the climate problem, I mentioned the carbon industry and said, “You realize, fixing the climate crisis means we have to kill the carbon industry, right?”

She (or he) stopped, thought, then said (paraphrasing): “Huh. You know, I think you’re right.”

Why do I bring this up? Because this person, who’s right about everything I want her (or him) to be right about, hadn’t thought through the climate problem to the obvious solution. If you don’t want it burned, you can’t dig it up. That means, we have to kill the industry. There’s just no other choice.

The problem we seem to be facing is this: The industry gets that, and they’re fighting back. But most people who care about climate don’t. So we’re stuck, year after year, with more of this: 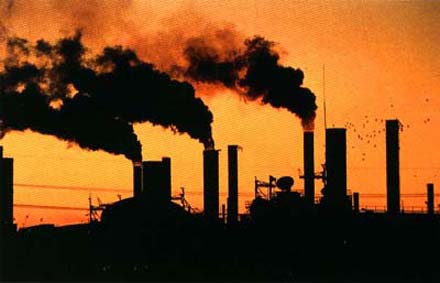 If they dig it, they will burn it.

This has to stop, right?

Do We Really Have to Impoverish the Whole Industry?

Yes. If we don’t make them poor — or make them switch to a completely different business — they’ll make us extinct, or at least hunter-gatherers again, with only the odd pocket of “civilized” (agricultural, settled) humans in the odd, eco-friendly location left to show for everything we’ve done with our time on earth.

Future atmospheric temperatures look something like this if we we don’t stop burning carbon:

Atmospheric temperature tracks pretty closely with atmospheric CO2 concentration, among other factors (this is temperature over the same period). The blue line near the middle of the chart above and also toward the right shows atmospheric CO2 in parts per million (ppm) prior to the Industrial Revolution. For most of the time humanoids have inhabited the earth, CO2 concentrations have been near 280 ppm. Thanks to the Industrial Revolution, we’ve brought that number up to 400 ppm, which is where we are today (this year in fact).

As to the future, the tallest red line on the far right shows CO2 concentration under the IPCC definition of a “business as usual” (BAU) scenario … almost 2000 ppm … by 2100.

(By the way, if you find 34 million years ago on the chart — look at the top in the second panel — you’ll see the point at which polar ice first started forming. Think about that.)

How much carbon we could dig up if we really wanted to (source; after Hansen, Fig 2). Left scale, in billions of tons of emitted carbon. Right scale, in ppm of atmospheric CO2.

Obviously, we’re never going to get to those high numbers; we’ll have devolved to pre-industrial humans by then. We clearly don’t want to go there, but you have to ask: If we keep allowing the carbon extraction (fossil fuel) industry to be profitable, when will we stop burning carbon?

At some point — and a sooner one rather than a later one — that industry will have to die or be killed, most likely by government force, if global warming is going to be arrested at all.

The Problem Is to Constrain Production, Not Consumption

George Monbiot, writing in The Guardian, has it just right. Solving the problem by constraining consumption of fossil fuel is not going to solve the problem at all. Everything extracted will be sold and used.

Monbiot starts by noting all of the pictures of cheering men and women after each of the climate conferences of the last 20 years (my emphasis):

If you visit the website of the UN body that oversees the world’s climate negotiations, you will find dozens of pictures, taken across 20 years, of people clapping. These photos should be of interest to anthropologists and psychologists. For they show hundreds of intelligent, educated, well-paid and elegantly-dressed people wasting their lives.

The celebratory nature of the images testifies to the world of make-believe these people inhabit. They are surrounded by objectives, principles, commitments, instruments and protocols, which create a reassuring phantasm of progress while the ship on which they travel slowly founders. Leafing through these photos, I imagine I can almost hear what the delegates are saying through their expensive dentistry. “Darling you’ve re-arranged the deckchairs beautifully. It’s a breakthrough! We’ll have to invent a mechanism for holding them in place, as the deck has developed a bit of a tilt, but we’ll do that at the next conference.”

This process is futile because they have addressed the problem only from one end, and it happens to be the wrong end. They have sought to prevent climate breakdown by limiting the amount of greenhouse gases that are released; in other words, by constraining the consumption of fossil fuels. But, throughout the 23 years since the world’s governments decided to begin this process, the delegates have uttered not one coherent word about constraining production.

Compare this to any other treaty-making process. Imagine, for example, that the Biological Weapons Convention made no attempt to restrain the production or possession of weaponised smallpox and anthrax, but only to prohibit their use. How effective do you reckon it would be? (You don’t have to guess: look at the US gun laws, which prohibit the lethal use of guns but not their sale and carriage. You can see the results on the news every week.) Imagine trying to protect elephants and rhinos only by banning the purchase of their tusks and horns, without limiting killing, export or sale. Imagine trying to bring slavery to an end not by stopping the transatlantic trade, but by seeking only to discourage people from buying slaves once they had arrived in the Americas. If you want to discourage a harmful trade, you must address it at both ends: production and consumption. Of the two, production is the most important.

To repeat just one of his comparisons: “Imagine trying to bring slavery to an end not by stopping the transatlantic trade, but by seeking only to discourage people from buying slaves once they had arrived in the Americas.”

You may not want to solve the climate crisis; or you may not want to believe there is one. But the greenhouse effect is a hard fact of science. (You can test it. Build a greenhouse, then sit in it on a sunny day.) If you think there is one, and you don’t want to face the need to kill the carbon industry, you may as well just spend time playing with your children, or creating them.

The Silence Surrounding the Need to Kill Carbon Production

Monbiot gets that naming the problem is difficult. It’s difficult for us, and also for the U.N. negotiators attempting to deal with it:

The extraction of fossil fuels is a hard fact. The rules governments have developed to prevent their use are weak, inconsistent and negotiable. In other words, when coal, oil and gas are produced, they will be used. Continued production will overwhelm attempts to restrict consumption. Even if efforts to restrict consumption temporarily succeed, they are likely to be self-defeating. A reduction in demand when supply is unconstrained lowers the price, favouring carbon-intensive industry.

You can search through the UN’s website for any recognition of this issue, but you would be wasting your time. In its gushing catalogue of self-congratulation, at Kyoto, Doha, Bali, Copenhagen, Cancún, Durban, Lima and all stops en route, the phrase “fossil fuel” does not occur once. Nor do the words coal or oil. …

The closest any of the 20 international conferences convened so far have come to acknowledging the problem is in the resolution adopted in Lima in December last year. It pledged “cooperation” in “the phasing down of high-carbon investments and fossil fuel subsidies”, but proposed no budget, timetable or any instrument or mechanism required to make it happen.

You cannot solve a problem without naming it. The absence of official recognition of the role of fossil fuel production in causing climate change – blitheringly obvious as it is – permits governments to pursue directly contradictory policies. While almost all governments claim to support the aim of preventing more than 2C of global warming, they also seek to “maximise economic recovery” of their fossil fuel reserves. (Then they cross their fingers, walk three times widdershins around the office and pray that no one burns it.)

Is prayer the answer? Possibly, but I recommend combining it with action of our own.

The Answer Is You and Me

I still contend that this problem isn’t insurmountable if enough people are determined to stop it. Nor is it too late to avoid the very worst of the consequences. If we stopped burning fossil fuel today, dead-stopped in 2015, atmospheric CO2 concentration would return to 350 ppm by 2100 (same Hansen paper, Figure 4b). That would very likely allow us to avoid completely the worst of the tipping points, like loss of polar ice.

The good news is, we can cause this good thing to happen. We just have to be willing to, as in my playful “Easter Island” metaphor:

You’re a villager on Easter Island. People are cutting down trees right and left, and many are getting worried. At some point, the number of worried villagers reaches critical mass, and they go as a group to the island chief and say, “Look, we have to stop cutting trees, like now.”

The chief, who’s also CEO of a wood products company, checks his bottom line and orders the cutting to continue.

There’s always a choice. We just have to choose it.