By Nick Cunningham, a Washington DC-based writer on energy and environmental issues. You can follow him on twitter at @nickcunningham1. Originally published at OilPrice

Oil analysts and commodity traders watch the price of crude swing down and up, and are trying to figure out when and to what extent the OPEC “price war” will force supply reductions from US shale. Any insight into this development can clarify the trajectory of oil prices.

But, of course, oil market dynamics are complex and fluid. US shale supply is hugely important for oil prices, but one of the more underreported factors influencing the price of oil is the pace of demand growth coming from China.

Consumption of oil in China has climbed rapidly and consistently since it took off in 1990, accelerating into overdrive in the 2000s. The inexorable surge in demand caused oil markets to tighten in the lead up to the financial crisis, and then again in subsequent years as the global economy recovered. 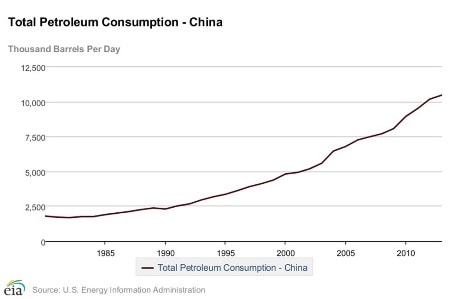 The rise in US shale production managed to finally halt the climb in prices, adding enough supply to send prices downwards. Much of the analysis since last year’s bust has been focused on what is going on in Texas and North Dakota, as well as on key decisions made in Vienna every six months.

But the story in China has been overlooked. When it comes to demand, China is arguably the most important country to watch.

And despite accounting for much of the world’s growth in demand in the 21st Century, China’s oil imports have been all over the map in recent months. In April, China imported 7.4 million barrels per day, a record high and enough to make it the world’s largest oil importer. But a month later, imports plummeted to just 5.5 million barrels per day. Much of that had to do with Chinese refineries going offline for maintenance, suggesting that the slowdown may have been just a slight detour from China’s seemingly ceaseless climb in import demand.

On the other hand, China’s exceptionally high levels of imports could be temporary. China is in the midst of filling up its strategic petroleum reserve, a project aimed at stockpiling 100 days’ supply in a reserve by 2020. China has seized the opportunity of low oil prices to fill up its strategic reserve as quickly as it can, buying up crude while it is cheap. This elevated level of imports has soaked up some of the glut, diverting several hundred thousand barrels per day of global supplies to China.

But what happens when China stops buying extra oil for its stockpile?

“We need to understand the dilemma of hidden demand in China, where you have two types of demand – normal demand and strategic stockpiling. The latter won’t last forever,” Jamie Webster of IHS Energy told Reuters in an interview. That could send prices down because once China stops vacuuming up a lot of the excess supply floating around for its strategic reserve, that additional oil will stay on the market.

But the bigger question is over how much oil China is actually burning – as opposed to stockpiling – and the magnitude of its rate of growth. In 2014, China’s growth in demand slowed to just 3 percent compared to the year before, adding just 300,000 barrels per day. In previous years the growth rate was often twice as high. The deceleration in oil demand growth can be attributed to a slowing economy – China’s GDP is growing at its lowest rate in a quarter century.

Demand is indeed inching up in the US because of low oil prices, but maybe not enough to really move the needle on oil prices. Efficiency efforts in the US and Europe are keeping demand largely stagnant.

The developing world, led by China, represent the most important demand-side factor when it comes to affecting the trajectory of oil prices. But after years of solid growth, China is now raising a lot of questions for the oil markets.