Yves here. Earlier this year, we wrote about a past large-scale basic income guarantee program in early industrial England, the Speenhamland system; As much as it was entered into with the best of intentions, to stem rural distress at a time when grain prices shot up by providing for a subsistence-level income, over time it served as a subsidy to employers. As we wrote:

The idea of a basic income guarantee is very popular with readers, more so that the notion of a job guarantee. Yet as we have mentioned in passing, this very sort of program was put in place on a large-scale basis in the past. Initially, it was very popular. However, in the long run it proved to be destructive to the recipients while tremendously beneficial to employers, who used the income support to further lower wages, thus increasing costs to the state and further reducing incentives to work. And when the system was dismantled, it was arguably the working poor, as opposed to the ones who had quit working altogether, who were hurt the most.

This post from VoxEU discusses how efforts to reform social welfare programs in England that operated on the assumption that lack of consistent work (as in periods of unemployment) and overly large families were the big drivers of poverty. But the author describes how the majority of poor now are working poor, and as in the Speenhamland days, social welfare programs are helping to subsidize below-living-wage pay levels. It’s not hard to see how similar factors are in play for US employers like Wal-Mart and McDonalds.

By Jim Tomlinson, Professor of Economic and Social History, University of Glasgow. Originally published at VoxEU

In Britain today, a majority of those in poverty live in working, rather than non-working, households. This challenges the long-held notion that paid work offers a route out of poverty. This column argues that structural changes in the labour market have brought about profound changes in the social security system. A failure to acknowledge these underlying changes means that dialogues about the political direction of the British economy can be problematic and potentially misleading.

n the run-up to the recent general election, 65 Social Policy professors wrote to the Guardian in the following terms:

Now the majority of children and working-age adults in poverty live in working, not workless, households. In other words – and ironically in view of the coalition’s rhetoric – many of those forced to claim the working-age benefits targeted for further cuts are not what the prime minister calls “shirkers” but, in fact, “hard working families” (5th May).

Plainly, the authors were concerned to make an immediate political point about the government’s austerity policies. But the sentences cited above, I suggest, indicate a profound, long-term shift in the social security system and beneath that, a shift of the British economy.

To indicate the significance of this shift we need to go back to two key moments in Britain’s modern history. First is 1795, when the Speenhamland system was introduced in a parish of that name near Newbury in the South of England. Under this system, wages deemed to be below those sufficient for subsistence were subsidised through the Poor Law out of taxes (local poor rates). This system was not actually new, nor did it become universal, but it has been widely recognised as symbolising the rejection of a crucial principle of liberal political economy (Polanyi 1947). The principle is that wages should be determined in a market, and should not be subsidised out of the public purse. Hostility to Speenhamland was widespread amongst the governing class of the time and especially amongst political economists, who argued that such a system created no incentives for the workers to maximise their wages, nor for employers to pay what was affordable to them. These perverse consequences were held-up as the typical result of well-intentioned but misguided intervention in the labour market. Eventually, at another key moment, under the Poor Law Amendment Act of 1834, such subsidies were outlawed, and liberal political economy emerged triumphant.

Another component of this political economy was the assumption that wages would not need to be subsidised to provide adequate wages; that waged work would be an effective route out of poverty. Of course, this principle was breached at the margins by such mechanisms as Wages Boards (later Councils) which imposed minimum pay on certain sectors of the economy. But here, of course, there was no state subsidy; the state just insisted that employers pay the minimum wage.

The classic mid-20th century Beveridge analysis of the sources of poverty suggested the problem lay fundamentally in ‘interruption to earnings’ (by unemployment, sickness, or age) along with large numbers of children, the latter to be addressed by ‘Family Allowances’ (Cutler et al 1987). While this analysis always misrepresented the labour market, not least in its barely-qualified notion of the ‘male-breadwinner household’, its fundamental idea that normally paid work would provide a route out of poverty has underpinned most modern understandings of how society works down to the present day.

But as the social policy professors’ letter indicates, we have come a long way from a Beveridgean world. My argument is that structural changes in the labour market have brought about profound changes in the social security system. What has changed in the period of de-industrialisation has been the numbers earning poverty wages, and being supported by in-work benefits. Effectively we have moved towards a huge ‘new Speenhamland’ system of ‘outdoor relief’ of the employed; or, viewed differently, large subsidies to employers, which has mitigated, but not cured the problem of poverty-level wages (Farnsworth 2012).

The point that Britain de-industrialised in the second half of the 20th century does not need to be laboured, though it is worth stressing that the process has been long drawn out, beginning in the 1950s (Feinstein 1999).[1]

Its effects have been to polarise the labour market. While for those with high levels of formal education the transition to a service economy has provided many opportunities, there has been a proliferation of low-paid work in parallel – “wage inequality is significantly higher now than it was some thirty years ago. This is true for men and women, and is the case in both the upper and lower halves of the distribution.” [NdS1] Machin calculates the ratio between 90th and 10th percentiles for the period 1970 to 2009, and suggests that in the last forty years of that period this dispersion rose by approximately 50% (Machin 2011). This pattern is well summarised in Table 1 below. 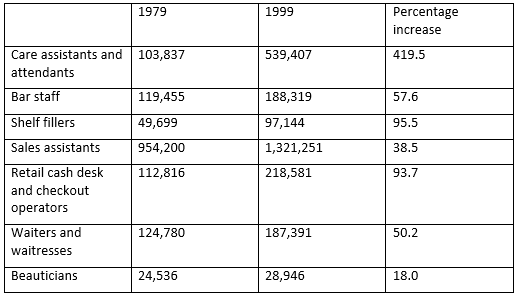 While this proliferation of low paid work has been taking place, the ruling ideology has decreed the need to incentivise people into work by maximising the gap between unemployment pay and wages. So reductions in unemployment pay have been accompanied, since the 1970s, by increasing in-work benefits. This began with the Family Income Supplement in 1971, but greatly expanded with the working Families Tax Credit and Working Families Tax Credit in the 1980s and 1990s. Expenditure per claimant on such benefits has increased from approximately £500 in 1970 to £4,300 in 2000 (Blundell and Hoynes 2004). In work incomes are also supplemented by housing benefit payments, most of which now goes to the employed.

While in the industrial period employment did not guarantee an above-poverty income, most poverty was amongst non-workers (the sick and disabled, pensioners, single mothers), or those with unusually large families. Abel-Smith and Townsend showed that in 1960 about 40% of households in poverty (those below 140% of the then National Assistance level) had a working member. But overwhelmingly they also had a large number (four or more) children (Abel-Smith and Townsend 1963). Recent work suggests that a majority of the poor are now members of households with at least one member in work: “As pensioner poverty is now at low levels, the rate of in-work poverty is the most distinctive characteristic of poverty today”. (Joseph Rowntree trust 2012). A different calculation suggests that whereas in the 1970s 3-4% of employed households were in poverty, the figure by 2000/1 was 14%. Between 1975 and the mid-1990s, the incidence of low pay for men in the labour market has doubled (Stewart 1999).

This suggests is that, along with a national minimum wage, wage subsidies have reduced but not prevented poverty amongst the employed. The likely cuts in such benefits under the Conservative government will further reduce their poverty-reducing impact. But whatever the short-run policy on these benefits, it is inconceivable that they will be abolished. So ‘new Speenhamland’ is here to stay.

When Polanyi wrote his ground-breaking book on the ‘Great Transformation’ to a market economy he devoted a whole chapter to Speenhamland because he saw the freeing of the market for labour as central to the whole process. As he himself recognised, a completely ‘free’ labour market is an impossibility. But there is no doubt that the degree of freedom in this area is a key marker of the overall nature of the reigning political economy. The paradox here is evident. We are constantly told (by both supporters and opponents) that we live in an increasingly neo-liberal economy, yet the role of the state in the labour market has in many ways increased over the last 40 years. In addition to the ‘new Speenhamland’, researchers at CRESC in Manchester have shown how publicly-financed employment mushroomed from the 1970s (the numbers are significantly higher than the official ONS data because the latter include only jobs within employing bodies ‘controlled’ by the state, and so exclude jobs out-sourced or otherwise funded indirectly).

So if we want to understand the long-term trajectory of the British economy, talk of the ‘success of neo-liberalism’ and ‘rolling-back the state’ seems at best problematic, and at worst misleading.