Harvard Business Review just published its annual ranking of “Best Performing CEOs in the World“. The noteworthy part, picked up by the Financial Times, is that last year’s numero uno, Amazon’s Jeff Bezos, fell from his perch to number 87 based on Amazon’s poor social responsibility marks. The new “best CEO” is Lars Rebien Sorensen of Novo Nordisk, a biotech player best known for a diabetes drug.

The Harvard Business Review deserves credit for this small but important symbolic step to redefine corporate success away from purely financial considerations and to include broader societal impact. As the story stated:

How did this mild-mannered, bespectacled executive land in the #1 spot on our list? It’s partly due to his company’s (darkly) fortuitous decision years ago to focus almost exclusively on diabetes treatment. The runaway global growth of the disease has driven up the company’s sales and stock price.

But his standing also reflects Novo Nordisk’s deep engagement with social and environmental issues, which now factor in to our calculations. “Corporate social responsibility is nothing but maximizing the value of your company over a long period,” says Sørensen, who has been with the company for 33 years. “In the long term, social and environmental issues become financial issues.”

Having said that, the Harvard Business Review is only taking small steps in pressing for broader notions of performance and accountability. The financial metrics count for 80% of the total score, and the “social responsibility” measures, a mere 20%. But this is still a long-overdue move in a better direction.

Perhaps as important, the Harvard Business Review methodology unwittingly allows the public to see which CEO is the most predatory, by looking at the divergence between its financial standing versus its score on “environmental, social, and governance (ESG) performance.” Now admittedly this is not identical to a measurement of impact on the community, broadly defined. For instance, governance issues tend to be of more concern to shareholders than other stakeholders, but it is true that the companies with the most insulated, imperial CEOs have a tendency to play fast and loose as far as the law and regulations are concerned (one example is Jamie Dimon, who is still both chairman, CEO, and president of JP Morgan, and managed to get away with appallingly lax internal controls and misrepresentations to shareholders and regulators, and has also been widely reported to bully central bankers like Mark Carney and Ben Bernanke).

This image from the Financial Times article nicely sums up the case for Bezos as top predator: 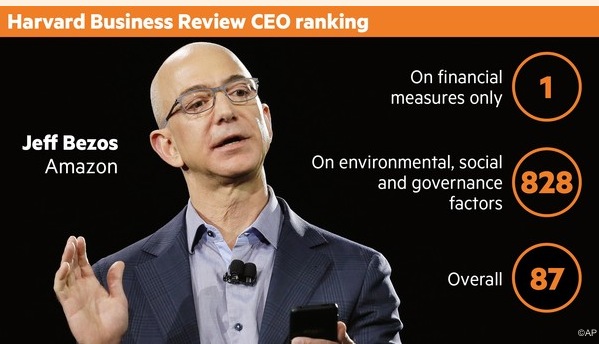 And mind you, this is even worse than it looks. Amazon is not 828 out of a presumed 1000 companies. It’s 828 our of 907. And it’s pretty hard for a service business to do the environmental damage of, say, an oil company (BP’s Deepwater Horizon) or a chemical producer (Dow’s Bhopal disaster, or the more recent horrific explosions in Taijin). So it’s not an exaggeration to see Amazon as being as bad as it can be in terms of broader community impact for a company of its type.

And it’s confirmed if you look at the spreadsheet that the Harvard Business Review courteously made available so outsiders can see how they came up with their ratings.

Sadly, but not surprisingly, there are companies with large gaps between their financial performance scores and their ESG ratings. After all, this is feature, not a bug, of modern capitalism.

Salesforce Tencednt of Hong Kong,, which is second only to Amazon in financial marks, is 630 in the ESG tally. Whole Foods is number three in the financial ranking versus 600 for ESG. The top-scoring financial firm, Blackock, is 5th on the return metric and an only somewhat terrible 483 on ESG. Two foreign companies show similar wide disparities: number 8 in money terms Japan’s Fast Retailing, comes in at 499 on ESG; Taiwan’s Hon Hai Precision Industry, is 9 in the financial ranking and 509 on ESG. And a company that is widely hated, Monsanto, scores 14th in financial results and 693 on ESG, putting it well ahead of Amazon.

Readers may also understandably wonder about how to devise an annual “environmental, social, and governance performance” rating when serious damage takes decades to inflict, while financial performance is an annual affair. The ESG rating is also black box. From the HBR article:

To measure CEOs’ performance on nonfinancial issues, HBR consulted with Sustainalytics, a leading provider of environmental, social, and governance research and analytics. Sustainalytics, which works primarily with financial institutions and asset managers, rates firms’ ESG performance on a scale from 0 to 100. Using the Sustainalytics data, we ordered the 907 CEOs from best to worst ESG scores to arrive at their ESG ranking.

For instance. that Whole FoodsESG rating of 600, no doubt due to its persistent cheating of customers, its anti-union efforts, and (mayhap) for being an upscale social responsibility poseur that pays workers less than a living wage. Amazon’s rating of 892 is closer to the bottom of the barrel. But how do you score the damage done by, say, a Monsanto, or by the well-funded and effective climate denialism of an Exxon? I spent some time thinking about how to come up with an annual “Most Evil Company” rating, and realized it would be too hard to pick apart long-term versus shorter-term actions.

Nevertheless, we’ve called on readers to boycott and/or limit their use of Amazon. It’s only when Amazon starts to pay a real price for its practices that it will be forced to make changes.