Yves here. There’s a lot of important information here on student loans, such as default rates at different borrowing levels and the impact of having student loans on a prospective borrower’s ability to get other credit. One important and surprising finding: the default rate is highest on low loan balances. As Lambert says, you can drown in six inches of water.

For Profit Goes on Probation

This is not the first time Phoenix-U has been in trouble. In 2013 the University of Phoenix was threatened with probation by the accreditation board for a lack of “‘autonomy’ from its corporate parent -– a development that prevented the university from achieving its ‘mission and successful operation.’” In other words, the for-profit university #1 priority by its owners was to turn a profit at the expense of teaching, retaining, and graduating its students. This is precisely what I had alluded to previously on higher rates of defaults.

An interesting analysis by the NY Fed suggests students with lower amounts of student loan debt are more likely to default than those students with higher amounts. This is a new take on student loan debt and associated default as it was always thought the higher the debt the greater risk of default. Student Loan Debt has increased as more attend college, costs to attain an undergraduate degree have increased, even higher costs are sustained for Masters and Doctorate degrees, and students have been staying in school longer. Coming out of college the study finds amongst students loan debt is distributed rather evenly over time with one third being held by those in the 20s, one third held by those in the thirties, and one third held by those forty years of age and older. A large percentage of those borrowers or ~39% of them have loans of less than $10,000 and it is the holders of debt who have been defaulting at a higher percentage. The study goes on to break it down as to why they might be defaulting more frequently than tose with higher amounts of debt.

Using Equifax credit data, the NY Fed broke down the data into loan origination cohorts of student loan borrowers and using the same Equifax data, developed default rates for each cohort. Taking the origination date information for each academic year, the Fed was able to assign borrowers to loan-origination-completion-cohorts. The analysis did not reveal dropout or graduation information; however by using loan origination data, the methodology used does approximate whether students left school finished their education or just left school. 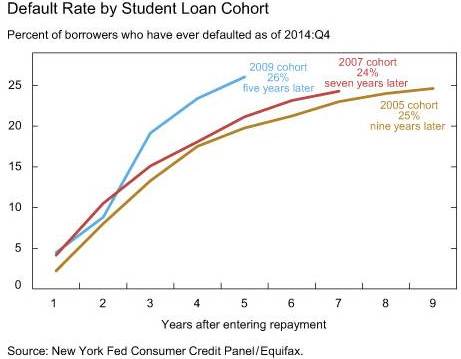 As shown on the graph and nine years out for the 2005 and the 2007 cohorts 24% of the students and greater had defaulted on their student loans by the 4th quarter of 2014. While the data for the 2009 cohort is incomplete and depicts five years as opposed to nine years, the data depicts a worsening default rate at 5 years then what can be found with the 2005 and 2007 cohorts at 9 years. Typically what we read and hear about is a 3-year window as reported by the Department of Education and is discussed by the news media. The 3-year window default rate is much less for each of the cohorts with the 2005 cohort being ~1/2 or 13% of what it is in 2014 as shown by the Fed study.

As I mentioned above, a large percentage of those who defaulted had student loan debt of less than $10,000. 34% of those borrowers in that group who defaulted on their student loans had balances of less than $5,000. 21% of the 2009 cohort were in this category of < $5,000 in student loans five years out which depicts a worsening trend when compared. A closer examination of the 34% also reveals this group to be made up of students who attended community college, did not finish, perhaps discovered this is not what they wanted to do, or the curriculum did not fit their needs.

What the NY Fed concludes is the default rate worsens when a much longer period of time is taken into consideration as opposed to the 3 year window the Department of Education looks at and which the public hears about in the news. The longer the period, the higher the default and it continues through years 4 through nine for the first two cohorts. As shown the default rate for the 2009 cohort is already higher. Those who had lower amounts of student debt in the end may have defaulted due to a worsening economy or potentially did not get the payback expected from a two year degree at a community college or for-profit school. The study also revealed those who are current today with their student loans did experience stress in making payments and 63% of those student loan borrowers appear to have avoided delinquency and default over the last decade. On the other side of the coin, student loan borrowers with $100,000 of debt had a default rate of 18% which has been attributed to their being higher earners after graduation. 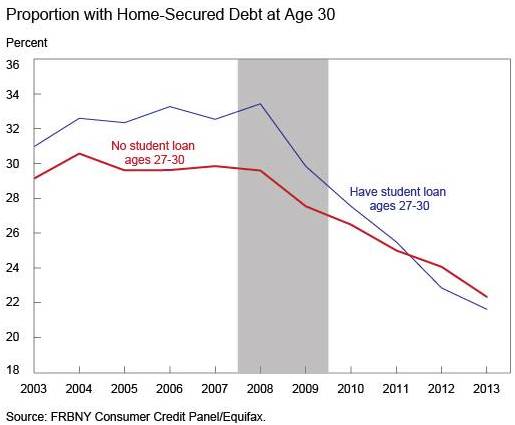 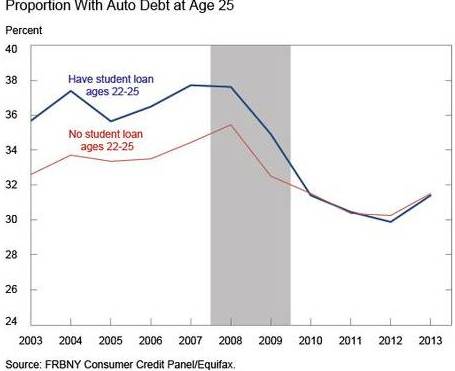 Much of the retreat from the market place is due to large loan and higher interest rates on undergraduate student loans, even higher interest rates and balances on graduate and doctorate student loans, higher balances due to the increased costs of colleges across the board, and longevity in paying back student loans. There are no controls on colleges and universities to rein in costs and it is the only cost to increase at a faster rate than healthcare. The higher costs play out in student loan debt as states do not subsidize colleges to the same ratio as they did 20 years ago, Pell Grants have not kept up with the costs of colleges, and parents can not afford the increased cost out of pocket either.

For the purchases of homes, cars, appliances; the bank assesses your ability to repay the loan as these loans can be discharged in bankruptcy unlike student loans which can not be discharged. Many college graduate households today consist of two married adults both of which are burdened with having student loans to pay off making the situation even more precarious. The result is increased risk. 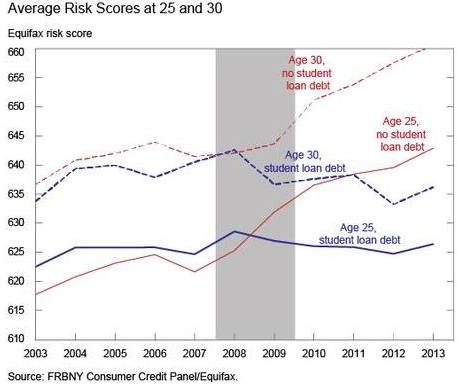 There are probably many other reasons why young households may have retreated from the market place; cultural changes in how younger households view home ownership, automobiles, and other purchases; higher costs of financing; lowered expectations of future earnings; unwillingness to take on more debt, etc. The fact of the matter is, not only does the market place view them as a higher risk; but, these college-educated young buyers are not buying homes, autos, etc. or making large investments at the same level that once existed and it does not bode well for the economy.

It also never ceases to amaze me the number of anti-educational opinions which flare up when the discussion of student loan default arises. There are always those who will prophesize there is no need to attain a higher level of education as anyone could be something else and be successful and not require a higher level of education. Or they come forth with the explanation on how young 18 year-olds and those already struggling should be able to ascertain the risk of higher debt when the cards are already stacked against them legally. In any case during a poor economy, those with more education appear to be employed at a higher rate than those with less education. The issue for those pursuing an education is the ever increasing burden and danger of student loans and associated interest rates which prevent younger people from moving into the economy successfully after graduation, the failure of the government to support higher education and protect students from for-profit fraud, the increased risk of default and becoming indentured to the government, and the increased cost of an education which has surpassed healthcare in rising costs.

There does not appear to be much movement on the part of Congress to reconcile the issues in favor of students as opposed to the non-profit and for profit institutes.