By Steve Horn, a Madison, WI-based Research Fellow for DeSmogBlog and a freelance investigative journalist. He previously was a reporter and researcher at the Center for Media and Democracy. Originally published at DeSmog Blog.

A new report published by the Post Carbon Institute concludes that Texas’ Eagle Ford Shale basin, the most prolific shale oil basin in the U.S., has peaked and reached terminal decline status. The Post Carbon report dropped just as Congress is on the verge of lifting the oil export ban for U.S.-produced crude oil, which will only further incentivize drilling and fracking.

Titled “Eagle Ford Reality Check: The Nation’s Top Tight Oil Play After More Than a Year of Low Oil Prices,” the report is the latest in a series of long reports on the overhyped future of oil obtained via hydraulic fracturing (“fracking”) in the U.S. by Post Carbon Institute Fellow David Hughes. Hughes formerly worked for 32 years with the Geological Survey of Canada as a scientist and research manager before coming to Post Carbon.

The skinny on the report is that the Eagle Ford is certainly productive and resilient, even despite a year of low global oil prices, but its future as a super-major type field is certainly in question based upon the numbers crunched by Hughes.

Post Carbon’s report cites an array of numbers and figures throughout the report, some of which are jaw-dropping.

For example, the vast majority of the drilling — read sweet spots for fracking — occurs in six counties within the Eagle Ford. And productivity of that oil in some counties, yes even in the most productive counties, is in decline.

“In July 2015, 52% of production came from Karnes, Dewitt and Lasalle counties, and 81% came from the top six counties,” the report details.

“Oil production peaked in all counties between June 2014 and May 2015. Karnes County, the top producer, has experienced the largest decline at 54.4 thousand barrels per day or a 15.5% reduction from peak. Dimmit County, with the fourth highest production, has declined the least.” 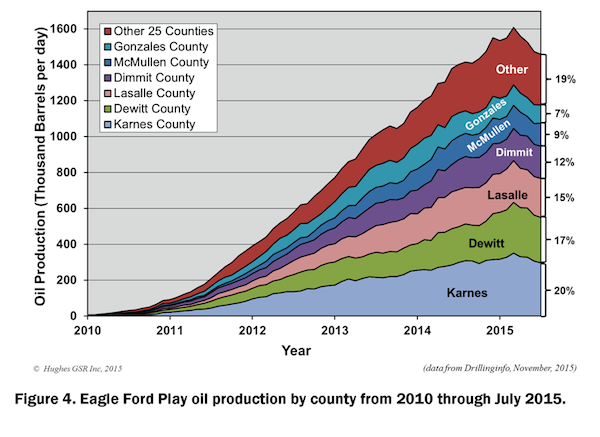 As a result, the drilling treadmill — seeking out new locales to frack in order to keep productivity rates flat — continues apace. The problem, Hughes points out, is that there isn’t anywhere left to turn.

“This is somewhat counterintuitive as conventional wisdom suggests that companies are focusing drilling efforts on their best acreage, which is in top counties such as Karnes, and withdrawing from more marginal parts of the play in order to maximize economics in a low oil price environment,” he writes. “The reason for the steeper decline in Karnes County is likely that it is the most heavily drilled and high quality locations are running out.”

These drilling trends are also mapped out for readers to see what the drilling treadmill and sweet spots looks like in action. 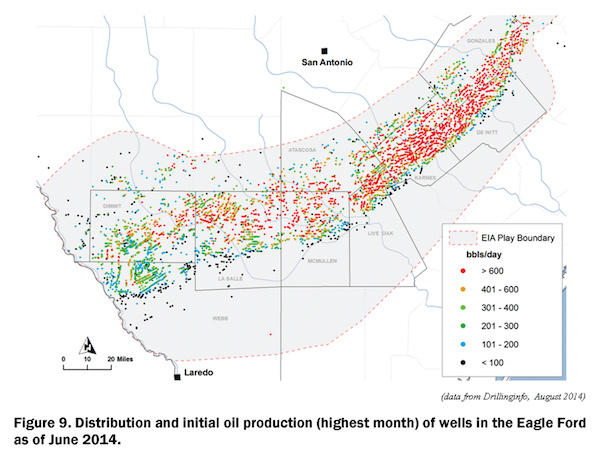 Peak production and the downward productivity trend in the Eagle Ford is also explained and shown visually by Post Carbon in the report. As more and more wells are drilled, productivity has reached a downward spiral as of March 2015 and hasn’t turned back since. 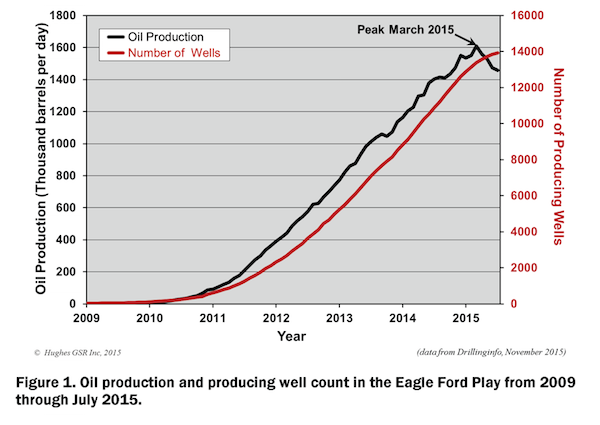 “The observation that new well quality is declining in top counties, despite every incentive to maximize individual well production, is key,” Hughes wrote in the conclusion. “Thus even to maintain the peak rate of 1.6 mbd, the drilling rate would have to increase from the 2,900 wells per year currently required (needing $23 billion per year of capital input exclusive of leasing and other ancillary costs).”

Hughes closes the report by suggesting that U.S. energy policy (and thus global energy policy) is dictated by a drilling technique that has already eclipsed peak production mode just over a half decade after its birth.

“The optimistic tight oil forecasts of the EIA, and even more optimistic forecasts of some industry watchers, are unhelpful abstractions in developing energy policy for a more sustainable future.”