Everyone knows that 2015 was a terrible year for emerging markets – but exactly how bad it was has become clear only recently. Not only was it an annus horribilis in terms of net exports of goods and services, which declined sharply and even turned negative for some previously buoyant exporters, but it was also a time when capital flows reversed course. The downturns in both indicators have been much more widespread and substantial than they were initially expected to be, and even greater than mid-year assessments suggested.

In a previous edition of MacroScan, we used IMF data to show how net capital flows into developing Asia had declined significantly in 2014. This marked a break from the previous boom period when emerging markets – and especially those in developing Asia – could do no wrong in the eyes of global investors. But 2015 turns out to have been much more devastating for emerging markets across the world, including those in Asia. A new report from the Institute of International Finance (“Capital Flows to Emerging Markets”, IIF Washington D.C., 19 January 2016) indicates just how serious the swings in capital flows have been.

A significant feature of the IIF estimates is that they capture unrecorded capital flight that is typically expressed in the form of “Errors and Omissions” in the balance of payments data. Using the total of net inflows from non-residents into emerging markets across all regions minus the total of net capital outflows made by residents, and adding the effect of errors and omissions, the reports comes up with the surprisingly large figure of $735 billion net capital outflow in 2015, compared to a net outflow of $111 billion in 2014.

Much of this was driven by China: the IIF estimates that net capital outflow from China in 2015 amounted to $676 billion, including $216 billion in unrecorded net outflows. However, even excluding China, emerging markets as a group experienced negative capital flows in both 2014 and 2015, with the amounts significantly larger in 2015 especially once unrecorded flows are taken into account.

It is noteworthy that this was only partially because of foreign residents pulling their capital out of these countries. This certainly happened to some extent, but net capital inflows from non-residents to all emerging markets remained positive in 2015 at an estimated $293 billion. Rather, the more significant factor was that residents of emerging markets took their money elsewhere: net private capital outflows by residents amounted to as much as $824 billion, and the trend was evident in terms of both foreign equity investment and lending patterns. Unrecorded flows in the form of errors and omissions contributed to the bleeding, amounting to as much as $206 billion.

This pattern is particularly evident for developing Asia. The IIF study is based on data from seven countries (China, India, Indonesia, Malaysia, Philippines, South Korea and Thailand) that account for the vast bulk of cross-border capital flows in the region. Charts 1 and 2 show some important information that emerges from these data.

In Chart 1, the data on non-resident inflows includes both private and official flows (such as flows from official bilateral and multilateral sources, which are however very small). The resident outflows refer only to private flows, since the official outflows occur in the form of change in foreign exchange reserves. Chart 1 indicates the dramatic swings in the direction of net capital flows that have occurred in just three years. Net non-resident capital inflows into these seven Asian countries declined from nearly $700 billion in 2013 to an estimated negative figure of around $18 billion in 2015. The IIF in fact projects further decline in 2016. Since private net capital flows remained large over all three years, and so the declining net inflows meant overall declining capital account balances. 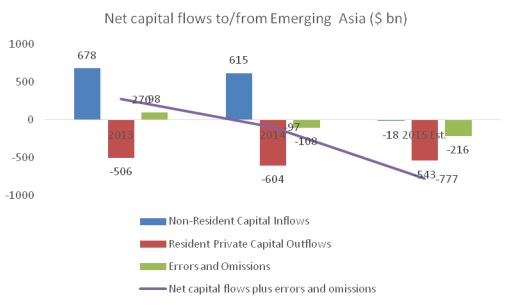 But the more significant swing has been in terms of unrecorded capital flows as suggested by the “Errors and Omissions” category: from a net inflow of $98 billion in 2013 to a net outflow of as much as $216 billion estimated for 2015. Once again this is hugely driven by what is happening in China in terms of unrecorded capital flight – the IIF estimates Errors and Omissions in the Chinese balance of payments to be greater than $200 billion in 2015. 3 But there is evidence of negative trends in other Asian countries as well, albeit to a lesser extent in terms of sheer volume. 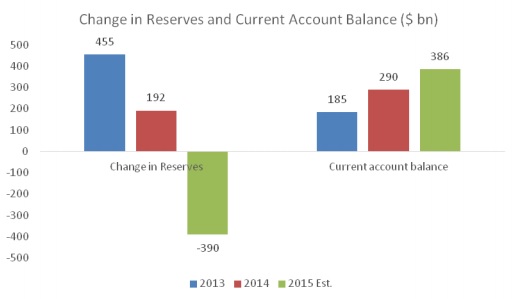 In other Asian countries, however, governments have chosen to allow their currencies to depreciate rather than use up reserves to prop up their exchange rates. This may reflect the urge to remain competitive in exporting in an increasingly difficult global environment. It could also result from the perception that even small declines in reserves in some countries can have disproportionate impact on investor expectations given the brittle and volatile behaviour of financial markets in the recent past.

All this bodes ill for the coming year. The IIF projections are similar to other gloomy prognostications about the global economy in 2016. But its assessment of the likely worsening of trends in capital flows may even be more worrying because it suggests that the behaviour of global capital markets will reinforce the downward pressures emanating from the slowdown in world trade, and may lead to further destabilisation of some important developing countries.