Dave here. Interesting empirical finding, though it doesn’t take into account the nature of the credit boom, or indeed the legality of it.

By Gary Gorton, Professor of Finance, Yale School of Management, and Guillermo Ordoñez, Associate Professor of Economics, University of Pennsylvania. Cross-posted from VoxEU

In a recent paper (Gorton and Ordonez 2016), we show that credit booms are indeed not rare, that some end in crises (bad booms) but others do not (good booms). Are these two types of booms intrinsically different in their evolution, or do they just differ in how they end? We show that all credit booms start with a positive shock to productivity on average ten years before the end of the boom, but that in bad booms this increase dies off rather quickly while this is not the case for good booms. This suggests that a crisis is the result of an exhausted credit boom. We then develop a simple framework that rationalises these empirical findings and highlight several shortcomings of standard macroeconomic models that tend to neglect the interplay between macroeconomic and financial variables.

Our finding: Productivity dies off faster during bad booms

We study a sample of 34 countries (17 advanced countries and 17 emerging markets) over a 50-year time span (1960-2010). We define a credit boom as starting whenever a country experiences at least three consecutive years of positive growth in credit over GDP that averages more than 5%, and ending whenever the country experiences at least two years of no credit growth. Once we have identified credit booms, we classify them into bad (or good) depending on whether or not they are accompanied by a financial crisis (defined as in Laeven and Valencia 2012) in a neighbourhood of two years of the end of the boom. We identify 87 credit booms in our sample, 34 of which are bad booms.

To study whether these two types of boom are fundamentally different we compare the evolution that total factor productivity and labour productivity experience. Figure 1 shows the average growth of these two productivity variables during the first five years of good booms (solid red) and bad booms (dashed blue). While on average all credit booms start with a positive shock to productivity, in bad booms this shock is smaller and tends to die off faster. 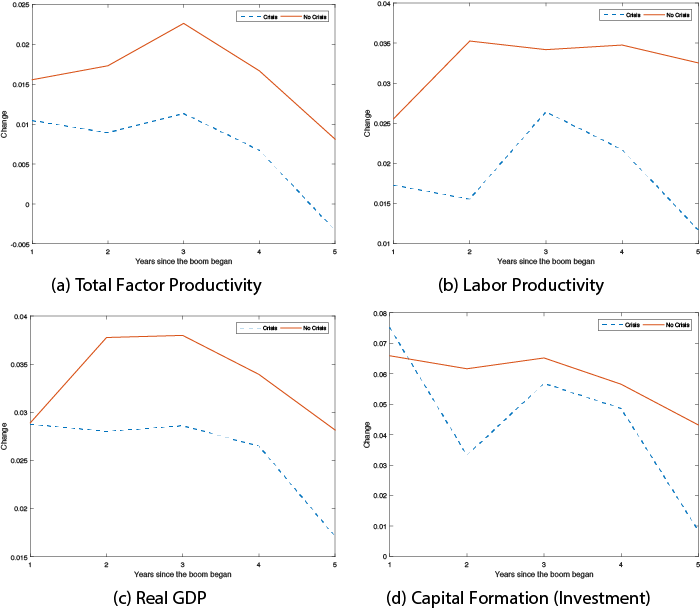 We show with a regression analysis that the different patterns between good booms and bad booms that are evident in Figure 1 are both statistically and economically significant. We find that, conditional on being in a boom, an increase of one standard deviation in total factor productivity reduces the probability of being in a bad boom (a boom that will end in a crisis) by 6%. We also show that, as is consistent with previous literature, a lagged increase in credit growth predicts crises but a lagged productivity decline does not. These results suggest that the evolution of productivity at the beginnings of the credit boom that precedes a crisis is more relevant that the evolution of productivity just prior to the crisis.

Our definition of a boom is purposefully agnostic as we do not want to impose any structure on booms, since there is no theory to guide us. We prefer to let the data inform us. When we follow the standard practice of de-trending credit growth before defining the boom, we find fewer and shorter booms because most of a boom arbitrarily is pushed into the trend. A regression analysis based on this ‘more standard’ definition of booms shows no difference in productivity between good booms and bad booms, confirming that we are losing relevant information by de-trending.

While macroeconomics is plagued with models that explain financial crises as the result of large negative productivity shocks, our results suggest that crises should be studied at lower frequency than usual and that we need a comprehensive model that combines the endogenous evolution of macroeconomic variables with the generation of crises without resorting necessarily on large contemporaneous shocks.

Financial crises are not (necessarily) triggered by contemporaneous shocks

We propose a model, motivated by an earlier paper of ours (Gorton and Ordonez 2014), in which financial crises are defined by credit markets operating under a different information regime. Firms finance projects with short-term collateralised debt. Lenders can, at a cost, privately learn the quality of the collateral, but it is not always optimal to do this, in particular when the loan is financing projects that are productive and not very likely to default. If collateral is not examined for a while there is a depreciation of information about its quality such that more and more assets can be successfully used as collateral over time. This induces a credit boom in which more and more firms obtain financing and gradually adopt new projects. If there are decreasing returns such that the quality of the marginal project that is financed declines with the total level of economic activity, there is a link between the credit boom and productivity in the economy.

As credit booms evolve, the average productivity in the economy declines and lenders have more and more incentives to acquire information about the collateral backing the loan. If at some point the average productivity of the economy decays enough, there is a change of the information regime in credit markets that leads to the examination of the collateral; some firms that used to obtain loans cannot obtain them anymore and output goes down, i.e. a crisis. Immediately after the crash happens, fewer firms operate, average productivity improves and the process restarts, i.e. an endogenous credit cycle, with a series of bad booms that are not triggered by any contemporaneous fundamental shock. In our model it is the trend of productivity and not its cyclical component that determines the cyclical properties of the economy. This is in contrast with most of the standard literature on real business cycles, a low frequency theory of crises.

We also show that if the new technology keeps improving over time, as the credit boom evolves, the endogenous decline in average productivity may be compensated for by an exogenous improvement in the quality of projects such that the change of the information regime is never triggered. If this is the case, the credit boom would end, but not in a crisis, i.e. a good boom.

In our setting productivity has two components: the probability that a project succeeds, and the productivity conditional on success. While most of the macroeconomic literature implicitly assumes that firms always succeed and focuses on the second component, we explicitly differentiate between the two. We show that the first component critically affects debt markets, while the second is more relevant for equity markets. While the macroeconomic literature has focused exclusively on the later, we show the relevance of the former to understand crises.

Our empirical findings suggest that viewing aggregate fluctuations as deviations from a trend is too stark (see Lucas 1977). As far as fluctuations that involve financial crises are concerned, changes in the trend of technological change, credit booms and crises are intimately related. Financial crises are not necessarily the result of negative productivity shocks around the trend, but the trend itself determines the likelihood of crises and the cyclical properties of the economy. Cyclical dynamics originate at a lower frequency than typically understood.