By Nicholas Shaxson, the author of Treasure Islands, an award-winning book about tax havens. Originally published at Fools’ Goldk

One our core arguments is that if you shower wealthy people and large corporations with goodies, two things happen.

First, you may help them and you may be able to demonstrate some benefits, somewhere in the economy: such as improved performance for the stock options held by the executives at the multinationals concerned.

Second, though, there is the annoying snag that those benefits entail costs elsewhere in your economy.

Someone has to pay for these goodies! Who will it be?

The easy trick of what we call the Competitiveness Agenda is to highlight the first and airbrush away the second. This way, you can transfer treasure from poor to rich, and if you call it ‘competitiveness’ then people go into a kind of trance, and they don’t question it. As a political formula, it has been spectacularly successful.

Now the FT has published a credulous article entitled Britain narrows gap in league of favourite tax regimes, which illustrates the woolly thinking. It begins:

“Britain has failed to regain its top slot in a league table of multinationals’ favourite tax regimes in Europe, in spite of George Osborne’s plans for further rate cuts. The findings were hailed by the Treasury as “an important vote of confidence in the UK economy.“

This is based on a survey by KPMG, the professional services firm, and it contains quotes from a couple of folk claiming that this is all a jolly good thing. Showering tax cuts on corporations makes corporations happy, and that’s a good thing, right?

But when I take my three daughters into an ice-cream parlour and ask them whether they’d like ice-cream they tend to say yes.

Quite so. And, he notes, the KPMG survey doesn’t contain a single question that seeks to assess whether those tax breaks are in any way decisive of a decision to invest in the UK or not.

And what do we find? True to our repeated demonstrations that the Big Four accounting firms are lobbyists and cheerleaders for the Competitiveness Agenda, rather than serious economic commentators, they have been fiddling with the numbers. Just for instance, they have this image:

But then, Maugham notes that they somehow neglect to disaggregate the data:

The graph underlying that is this one. 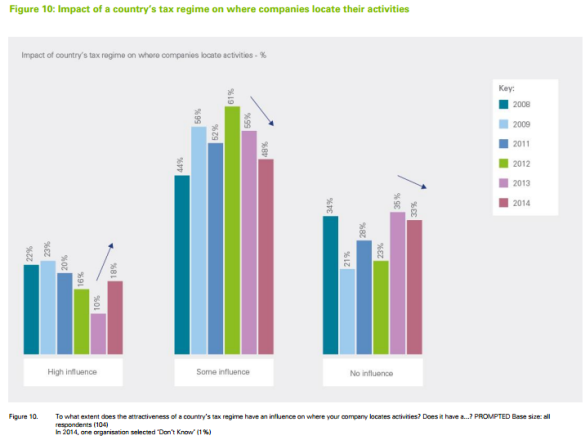 Admittedly, 2013 was a banner year for the ‘no influence’ crowd.

Yet overall, Maugham’s severely understating the prestidigitation of KPMG here.

First, are these people talking about real investment or just accounting tricks and profit-shuffling? A clue is provided on p33 of their survey, where it emerges that their correspondents were “senior tax decision makers.”  That is, profit-shufflers. (Why not ask the chief investment officer, or the CEO?) This was a very special group of respondents.

Maugham also doesn’t ask — because the data isn’t there — how much of it is actually “round-tripped” UK-sourced investment which has been routed offshore and then returned to the UK, in order to get tax breaks and other goodies that are offered to ‘foreigners’ in the name of ‘competitiveness’. (And there are a bunch of other arguments here too, that need to be considered.)

Maugham makes statements that could have been lifted directly from Fools’ Gold:

“The report contains no analysis at all of the costs and the benefits for us as a nation of cutting the tax burden on business.
. . .
What do we actually get for foregoing the tax revenue – the “further improvements” described by Treasury? The effects of the greater “tax attractiveness” described by KPMG? And is it worth it?“

Hitting the nail on the head. (We at FG have had some correspondence with Maugham on this question, in fact.)

For more on all this, see the article New research: ‘competing’ aggressively on tax reduces growth.

There are a couple of messages to come out of this.

First, even among the senior tax decision makers — the most extreme crowd that KPMG could have selected for this survey — more respondents, year after year, say that tax has no influence on where companies locate activities than those who say it has a high influence.

We’ll wheel out an old favourite quote from Paul O’Neill, former head of Alcoa (and George W. Bush’s Treasury Secretary for a while)

“I never made an investment decision based on the tax code . . . If you are giving money away I will take it. If you want to give me inducements for something I am going to do anyway, I will take it. But good business people do not do things because of inducements.”

But maybe a more important message from this story isn’t about KPMG, or even about this government’s spin (and by the way, we’ve spoken to UK Treasury and ex-Treasury people: they know perfectly well that this stuff is, as Jonathan Portes described the competitiveness stuff to us not so long ago, “meaningless fluff” — and one wonders which Treasury official let this ‘hailing’ through, and why.)

Maybe the most important question is about the messenger. This is the Financial Times, for goodness’ sake. They are the economic paper of record. And they are content to let these economic howlers slip by, with nary a dissenting voice.