Unicorns: Between myth and reality Financial Times (David L). Unicorns are always mythological or fake. The choice of that word to describe these companies was an unintended bit of honesty

Researchers have found a ‘striking’ new side effect from eating fast food Washington Post. Furzy also sent the link to the study: Recent Fast Food Consumption and Bisphenol A and Phthalates Exposures among the U.S. Population in NHANES, 2003–2010 National Institutes of Health

I do not believe that Brexit will happen Gideon Rachman, Financial Times. Rests on the assumption that the UK will get concessions from the EU. The EU does not want to do that because it would embolden separatists. Maybe British pols hope a few months of “uncertainty” will soften up the Europeans, but finance-dependent Britain will take the harder hit over the near term.

Has Britain avoided a ‘European superstate’? France and Germany ‘draw up plans to morph EU countries into one with control over members’ armies and economies’ Daily Mail (Brain C). An indicator of no Leave regrets from the tabloids. Any readers who follow the tabloids (I have one colleague who does to watch sentiment), please help us keep tabs on whether they are still backing Leave or are starting to sound equivocal.

Never mind Brexit. France and Germany rush to save eurozone Politco. Read to the later part of the story. Changes are expected to be cosmetic. Quelle surprise!

Dow closes down more than 250 points at lowest since mid-March CNBC. So despite the hysteria, US stock market investors haven’t suffered much.

European Banks Get Crushed, Worst 2-Day Plunge Ever, Italian Banks to Get Taxpayer Bailout, Contagion Hits US Banks Wolf Ricther. This is much more serious. Italian banks already needed a bailout and the Eurocrat minder said no. Italy has asked again and the conditions do look more urgent.

Financial Times. Key para: “On Wednesday, Mr Cameron will be asked to leave the summit while the remaining 27 members hold informal talks on how to approach Brexit negotiations and how to stop them stretching out over many years.”

Iglesias made the same mistake as Tsipras failed evolution

Yuan tanks again MacroBusiness. Important, and being ignored with the Brexit panic. Ambrose Evans-Pritchard warned that a yuan devaluation would send a deflationary shock at a time when the world economy was already weak.

Europeans Contest US Anti-Russian Hype Consortiumnews. This is a big deal. Has to be a real rift for a top German official to go public v. US warmongering. Chuck L: “It looks like John Helmer was on to something with his post the other day on a German-Russian Rapallo Redux.”

Clinton’s “First Major Betrayal”? DNC Surrogates Defeat Anti-TPP Measure Common Dreams (Raven). Hard to see how this can be depicted as a betrayal when it was clear what Clinton’s real posiiton was. But good to see this publicized regardless.

The Clinton Campaign Is Obstructing Change to the Democratic Platform Politico. A feature, not a bug.

Elizabeth Warren Is Out Here to Keep Hillary Clinton Honest Esquire. Pierce wasn’t wowed. But notice at the end, the Trump campaign put out a very pointed statement….which Trump proceeded to ignore.

Trump lawyers point to Clinton aide in Trump U. video fight Politico. Odds are high the ruling will be appealed. Politico

Lewandowski gets destroyed on CNN for hyping Trump as Brexit expert: ‘He didn’t know what it was’ Raw Story (furzy). Proving to be a terrible surrogate. Maybe the CNN staff should stop fighting to get rid of him. Of course they would run the risk that he eventually gets better.

When Justices Thomas and Sotomayor dissent together The Washington Post (furzy)

Finance as a driver of growth: New evidence VoxEU. UK data, but finds finance is important for smaller companies, less so for bigger one. And who is well v. badly served by the financial services industry in the US?

Antidote du jour. Lawrence R, from National Geographic’s Best Photos: “Photographed by Ian McAllister using an underwater housing, this shot captures an intimate portrait of a wolf wading through the inter-tidal zone on the British Columbia coast in Canada. The wolf took a break from eating herring roe to investigate the photographer’s half-submerged camera.” 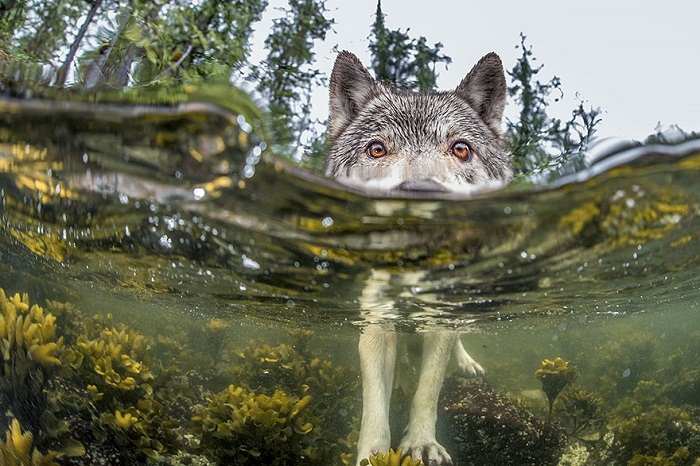